Boris Johnson is facing growing pressure from Donald Trump and his own Cabinet over whether to hand Chinese telecoms giant Huawei a role in building the UK’s 5G network.

The US is ardently against the UK allowing the company to help build ‘non-core’ parts of the network over spying fears with a final decision on the matter expected on Tuesday.

Mr Johnson discussed the issue with the US President in a call on Friday as the latter reportedly repeated his warning to the PM not to allow the tech giant to form part of Britain’s crucial infrastructure.

Mr Trump also reportedly told Mr Johnson that the US could step in and help the UK to build the network instead of Huawei – but British officials believe this would delay the roll out of the technology for too long.

Donald Trump, pictured in Toledo, Ohio on January 9 reportedly offered the UK US help to build its 5G network

The US has upped pressure on the UK in recent days as three senators took the unprecedented step of writing to the National Security Council to urge caution.

Meanwhile, some cabinet ministers are thought to share the same concerns as the US on the involvement of Huawei, with Home Secretary Priti Patel and Defence Secretary Ben Wallace reportedly ‘on the warpath’.

The US administration has urged allies to ban Huawei from their infrastructure, claiming it would be a security risk – something the Chinese company vehemently denies.

Security of telecommunications networks was discussed in the phone call between Mr Johnson and Mr Trump on Friday, according to the White House.

Their call came after reports that UK officials had backed the firm to play a role. A final ruling will ultimately be made by politicians.

‘The two leaders discussed important regional and bilateral issues, including working together to ensure the security of our telecommunications networks,’ a White House statement said.

‘They discussed a range of issues, including cooperation to ensure the security of our telecommunications networks.’

US Treasury Secretary Steven Mnuchin raised the issue in talks with Chancellor Sajid Javid during a visit to London yesterday.

Meanwhile, the letter sent to the NSC by three US senators, including former presidential candidate Marco Rubio, argued that Huawei’s ‘actions show a clear record of predatory and problematic behaviour’, according to the Sunday Times.

It concluded that it is in the ‘best interest’ of the UK to ‘exclude Huawei’ from the 5G network. 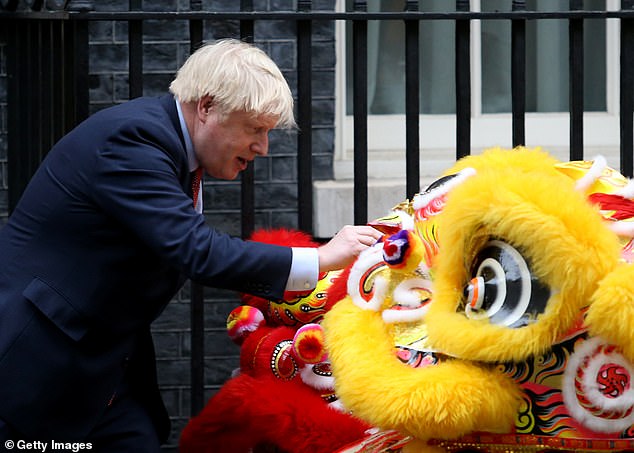 Boris Johnson, pictured in Downing Street on Friday, is facing a Cabinet backlash of potentially involving Huawei in the construction of the UK’s 5G network

As well as facing Cabinet opposition over Huawei, Mr Johnson is also under pressure from Tory MPs.

Bob Seely, a Conservative MP who is running to be the next chairman of the Foreign Affairs Select Committee, wrote in the Sunday Times: ‘Let us hope we don’t regret our refusal to say, “no way, Huawei”.

‘I fear by the time we see the real cost, in the decades to come, it may be too late.’

Last year, the US imposed trade restrictions on Huawei over concerns about the company’s security and ties to the Chinese government.

Allegations that their telecommunications equipment could be used for spying has been repeatedly denied by the tech giant.