The intelligence whistleblower who helped expose Donald Trump’s call with Ukraine’s president that sparked a political firestorm now fears for their life, their lawyer has said.

Andrew Bakaj, lead attorney for the whistleblower, said he has ‘serious concerns for our client’s personal safety’ after Trump compared the act of exposing him to ‘treason’ and suggested using the death penalty.

He also revealed the existence of a $50,000 ‘bounty’ that has been offered for ‘any information’ about the whistleblower, who is known to be an ex-CIA agent.

In a letter to Acting Director of National Intelligence Joseph Maguire, seen by Dailymail.com, Mr Bakaj suggests that the whistleblower has been placed under federal protection and thanks the director for ‘ensuring their safety’.

The existence of the call prompted Democrats to launch an impeachment inquiry into Trump, with House committees due to depose State Department officials linked to Trump’s dealings with Ukraine this week.

He wrote: ‘The purpose of this letter is to formally notify you of serious concerns we have regarding our client’s personal safety.

‘We appreciate your office’s support thus far to activate appropriate resources to ensure their safety.

‘The events of the past week have heightened our concerns that our client’s identity will be disclosed publicly and that, as a result, our client will be put in harm’s way. On September 26, 2019, the President of the United States said the following:

‘The fact that the President’s statement was directed to ‘the person that gave the Whistleblower the information’ does nothing to assuage our concerns for our client’s safety.

‘Moreover, certain individuals have issued a $50,000 ‘bounty’ for ‘any information’ relating to our client’s identity.

‘Unfortunately, we expect this situation to worsen, and to become even more dangerous for our client and any other whistleblowers, as Congress seeks to investigate this matter.’

However, Mark S Zaid, part of the legal team representing the whistleblower, accused 60 Minutes of ‘completely misinterpreting the contents of our letter’ without saying which parts of the report he disputes.

‘Nor have we, as we stated earlier today, reached any agreement with Congress on contact with the whistleblower. Discussions remain ongoing,’ he added. 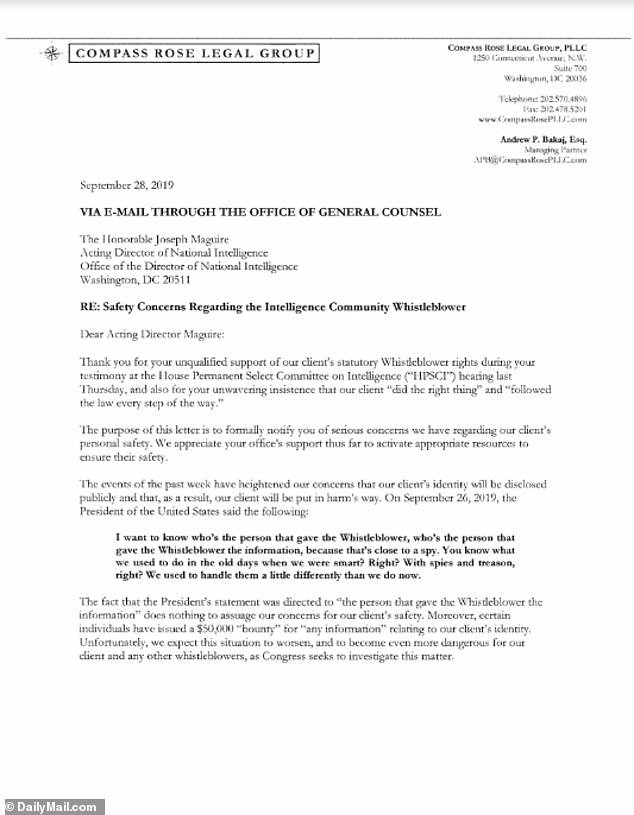 In a letter addressed to Acting Director of National Intelligence Joseph Maguire, the legal team also revealed the existence of a $50,000 bounty for ‘information’ on their client 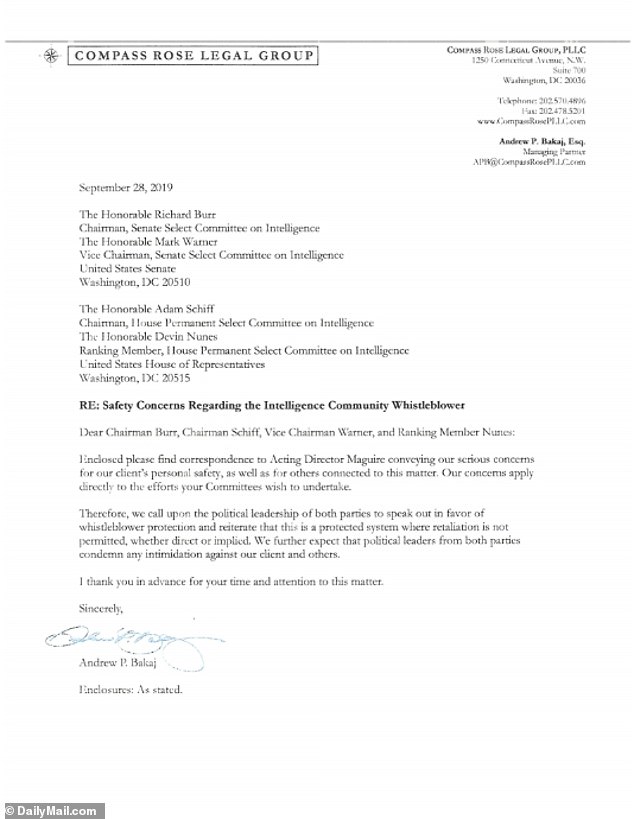 The House Intelligence Committee has said it will be ready to hear from the whistleblower ‘very soon’ at a private meeting to hide their identity.

The existence of the letter was first revealed by CBS’s 60 Minutes after Trump said he has a right to meet the person who triggered an impeachment probe against him.

President Trump on Sunday tweeted a quote from a Baptist pastor who said that his removal from office would ‘cause a Civil War like fracture… from which our country will never heal.’

Jeffress, an evangelical who is a staunch supporter of the president, is the Southern Baptist pastor of the First Baptist Church in Dallas.

The church, whose congregation numbers 13,000, is considered one of the more influential in the American evangelical community.

‘They know they couldn’t beat him in 2016 against Hillary Clinton, and they’re increasingly aware of the fact that they won’t win against him in 2020, and Impeachment is the only tool they have to get rid of Donald J. Trump.

‘And the Democrats don’t care if they burn down and destroy this nation in the process.’

Battling the deepest crisis of his presidency, Trump has railed against assertions that he should be impeached for urging Ukrainian President Volodymyr Zelensky to investigate Joe Biden, his potential 2020 White House challenger.

‘Like every American, I deserve to meet my accuser, especially when this accuser, the so-called ‘Whistleblower,’ represented a perfect conversation with a foreign leader in a totally inaccurate and fraudulent way,’ Trump wrote in a tweet Sunday.

‘He wrote down and read terrible things, then said it was from the mouth of the President of the United States. I want Schiff questioned at the highest level for Fraud & Treason,’ he wrote.

Trump’s Republican aides have sought to turn the tables on Democrats pushing for his impeachment, insisting that the president was the true ‘whistleblower’ as he had asked Ukraine to investigate Biden and his son for corruption.

‘Getting to the bottom of a corruption scandal in Ukraine is in the American national interest.’

Trump’s personal lawyer Rudy Giuliani – who has emerged as his point man in the Ukraine scandal – led the charge along with Miller in combative Sunday talk show appearances. 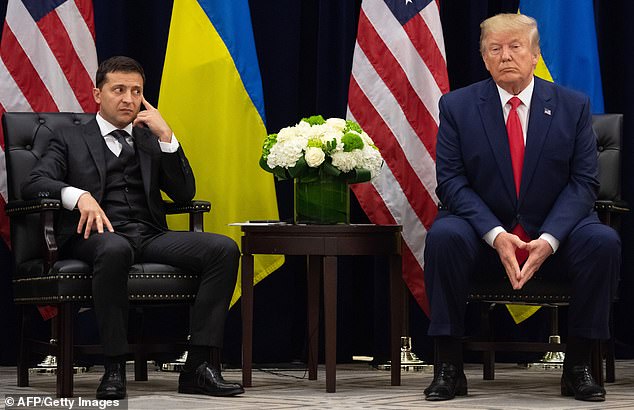 In the call, Trump can be heard telling Zelensky (left) to look into corruption claims involving Joe Biden’s son Hunter who once served as senior manager of a gas company in the country

Brandishing what he said were affidavits incriminating Biden’s son Hunter over his work at a Ukrainian company, Giuliani said Trump was duty bound to raise the issue with Kiev.

‘If he hadn’t asked them to investigate Biden, he would have violated the constitution,’ Giuliani told ABC’s This Week, charging that ‘Donald Trump was framed by the Democrats.’

Trump and his allies claim Biden, as Barack Obama’s vice president, pressured Kiev to fire the country’s top prosecutor to protect his son Hunter, who sat on the board of a gas company, Burisma Holdings, accused of corrupt practices.

Those allegations have largely been debunked and there has been no evidence of illegal conduct or wrongdoing in Ukraine by the Bidens.

But a transcript of the July call shows Trump pushing for Kiev to revisit the matter, saying both Giuliani and US Attorney General Bill Barr would be in touch.

For Democrats, that amounted to a smoking gun, leading Speaker Nancy Pelosi to finally approve an impeachment process she opposed as a risky distraction from the 2020 battle.

Trump has also demanded to meet his accuser, after information from the complaint sparked an impeachment inquiry against him

The President has also been demanding the identity of people who spoke to the whistleblower, describing them as ‘something close to a spy’

Pelosi on Sunday called for Trump to ‘speak the truth. Honor your oath of office to the Constitution of the United States.’

‘Don’t make this any worse than it already is,’ she said.

Democrats have charged aggressively into the inquiry, ordering Secretary of State Mike Pompeo to turn over Ukraine-related documents and scheduling witness testimony.

On NBC’s Meet the Press, Schiff said he expected the whistleblower to testify ‘very soon’ – with all precautions taken to protect their identity.

CBS News released a letter from the whistleblower’s lawyers to the acting director of national intelligence expressing concern that their ‘client will be put in harm’s way.’

‘We expect this situation to worsen and become even more dangerous,’ the letter said, calling for ‘appropriate resources to ensure their safety.’

Democrats have said articles of impeachment – formal charges – against Trump could be completed in as little as a month and swiftly voted on in the House, where the party has a majority.

The Biden campaign sent a letter Sunday to US TV networks to demanding they stop booking Giuliani for interviews, accusing him of ‘knowingly and willingly’ lying.

Polls suggest public support is growing for the impeachment inquiry, with a new CBS survey showing 55 percent of Americans – and nine in 10 Democrats – approve.

But even if impeachment is approved in the House, Trump would be tried in the Senate – where, for the moment, he appears able to count on a Republican majority to prevent conviction. 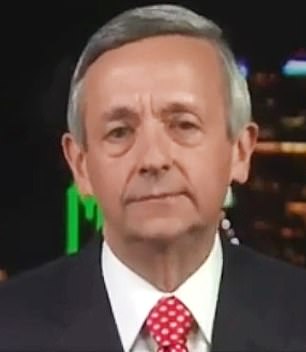 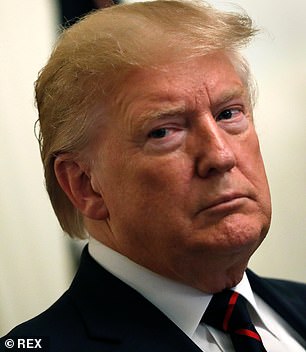 Elsewhere on Sunday President Trump tweeted a quote from a Baptist pastor who said that his removal from office would ‘cause a Civil War like fracture… from which our country will never heal.’

Jeffress, an evangelical who is a staunch supporter of the president, is the Southern Baptist pastor of the First Baptist Church in Dallas.

The church, whose congregation numbers 13,000, is considered one of the more influential in the American evangelical community.

‘They know they couldn’t beat him in 2016 against Hillary Clinton, and they’re increasingly aware of the fact that they won’t win against him in 2020, and Impeachment is the only tool they have to get rid of Donald J. Trump.

‘And the Democrats don’t care if they burn down and destroy this nation in the process.’

When asked about the reaction from evangelical Christians to the possibility of an impeachment inquiry against Trump, Jeffress responded: ‘I have never seen the evangelical Christians more angry over any issue than this attempt to illegitimately remove this president from office, overturn the 2016 election, and negate the votes of millions of evangelicals in the process.

‘They know the only impeachable offense that President Trump has committed was beating Hillary Clinton in 2016.

‘That’s the unpardonable sin for which the Democrats will never forgive him.

‘If the Democrats are successful in removing the President from office (which they will never be), it will cause a Civil War like fracture in this nation from which our country will never heal.’