Donald Trump has won an extraordinary £150million battle to build 550 new homes at one of his Scottish golf resorts despite 3,000 locals demanding it be stopped.

The luxury properties will be built along with shops, offices and restaurants near his Trump International course north of Aberdeen.

His family business Trump International Golf Links has been involved in a long-running dispute with dissenters who bombarded Aberdeenshire Council with complaints.

Planners have revealed it had received 2,921 valid representations from the public about the plan, 2,918 of which were objections and just 3 supported the Trump Organization application.

But the significant local opposition – and a lack of local support – the council has today approved the £150million plan. 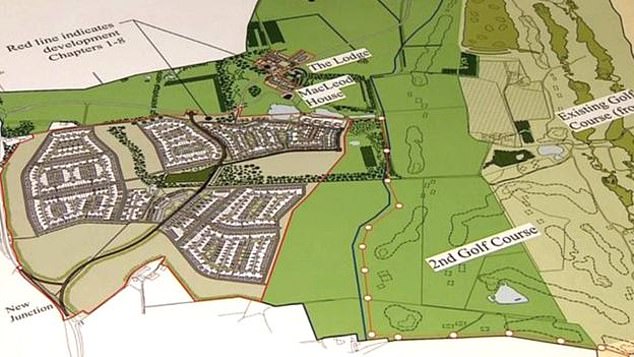 The 18-hole MacLeod Course (shown right) is to be built beside the original links at Balmedie, which opened in 2012 following a long, controversial planning process 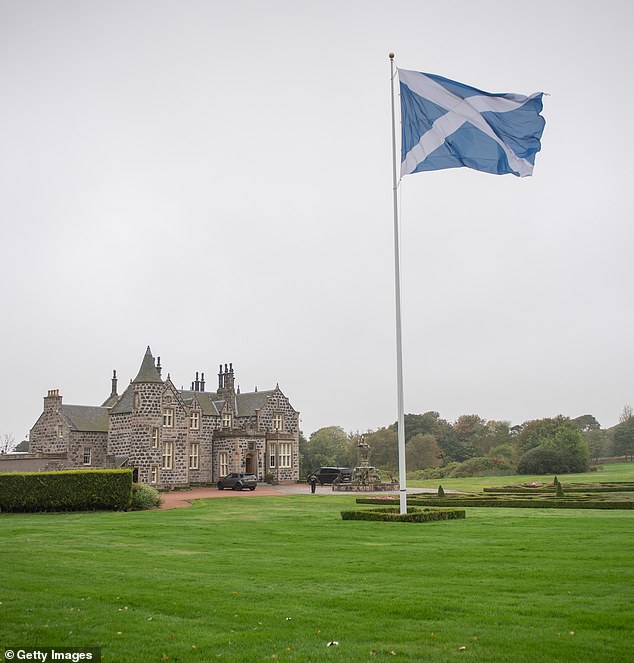 The Scottish authorities hope this will help develop tourism in the area, which has suffered from a decline in the oil industry.

The application was passed by 38 out of 62 councillors who voted at a meeting in Aberdeen on Thursday morning.

Approval came despite criticism the scheme deviated from the original plans for the site, which included a 450-bedroom hotel as part of the first phase of the luxury golf resort.

The hotel has not been built, with current tourist accommodation limited to 21 rooms at MacLeod House and an accompanying lodge.

March 2006: Donald Trump announces he wants to build a new resort for Aberdeenshire and then flew to the Scottish coast from New York to announce it saying it will cost £330m.

November 2006: Trump personally unveils the plans and says the price will now go up to £1bn.

September 2007: Aberdeenshire planners recommend the plans for approval – but then councillors ignore them and reject it.

December 3 2007: A furious Donald Trump says he won’t appeal and pulls the plug on the plans.

December 4 2007: The Scottish Government steps in and says they will have the final say on any plans;

July 2018: The Trump Organisation submits a planning application for 550 homes.

Of the 550 houses agreed, 50 are designated holiday units and 500 a mixture of private residences, rental properties and holiday homes.

The council’s planning committee recommended the application for approval, however, stating it would ‘still result in development that will provide economic and social benefit to the local area and region’.

‘This has been a very long planning process for this stage in the development. I’m thrilled for the staff and the rest of the consultancy team.

‘Today’s very strong recommendation is a clear endorsement by the north-east of Scotland that the Trump development to date is already a success and we want to built on that great foundation and bring forward the future phases of the site.’

Councillors heard the properties would be built on an 84-hectare site within the Menie Estate, with the hotel no longer economically viable as Aberdeen is overcapacity.

Planning manager Mairi Stewart said there was a view the proposal was ‘perhaps less attractive’ than the original development plan but acknowledged changes in the economic climate.

Council leader Jim Gifford said he was disappointed there would no longer be a five-star hotel but accepted ‘things have moved on’.

Councillor Richard Thomson, who opposed the proposals, said he did not accept there had to be a ‘retreat’ from a 450-bed hotel to 50 resort units.

He said: ‘I think we can do better than this and so can the applicant.

‘We were promised something transformational with this development, I don’t think that this is it.’ 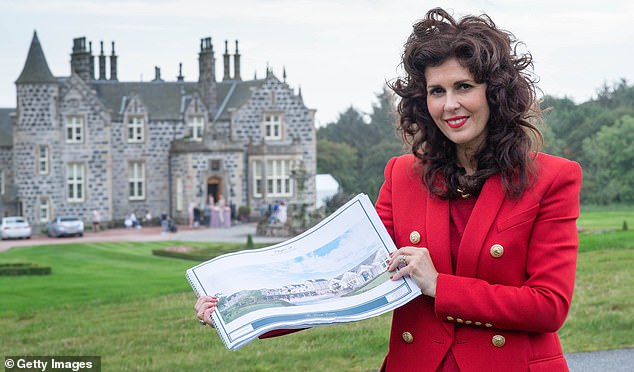 Sarah Malone, executive vice-president of Trump International Golf Links Scotland, shows off the plans for the expansion of the Menie Estate in Aberdeen 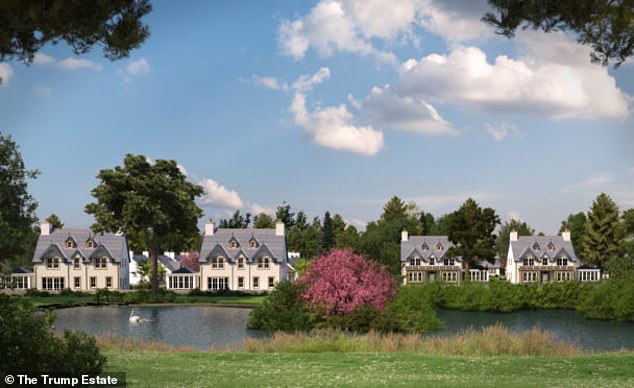 Of the 550 houses agreed, 50 are designated holiday units and 500 a mixture of private residences, rental properties and holiday homes 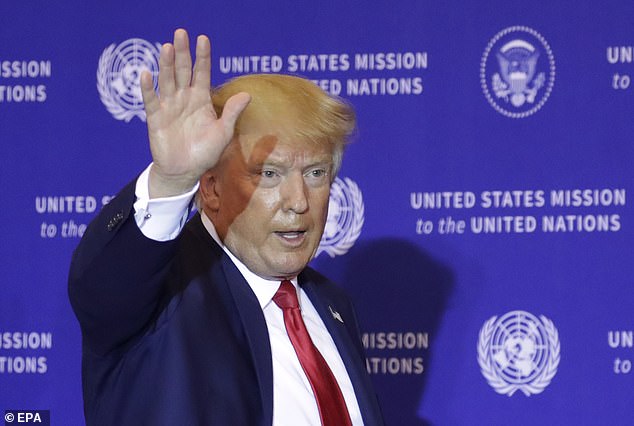 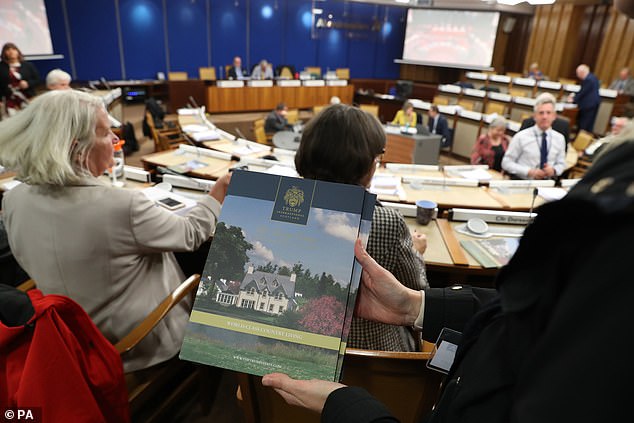 Councillor Martin Ford, a strong critic of Donald Trump, did not take part in the vote, saying his previously voiced views would exclude him from taking part.

The controversial coastal development was approved after Scottish ministers called in the original planning application and granted approval in 2008.

The decision to approve the 550 properties is more good new for Donald – with plans for a second course at a Donald Trump Scottish golf resort given the go-ahead two days ago.

The 18-hole MacLeod Course is to be built beside the original links at Balmedie, Aberdeenshire, which opened in 2012 following a long, controversial planning process.

It is named after the US president’s mother, Mary Anne MacLeod, who was born on Lewis but later emigrated to New York, where Mr Trump later made his fortune in real estate. 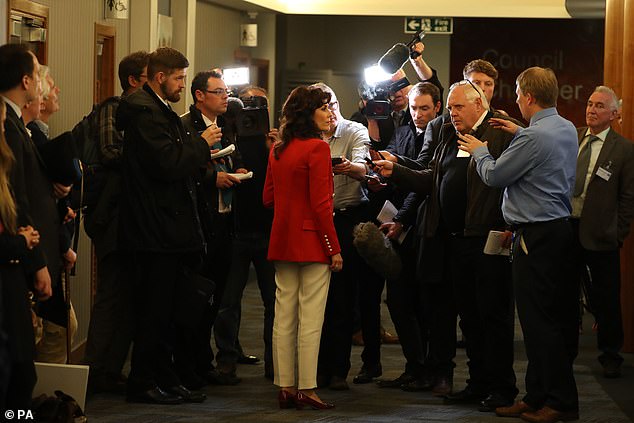 The original course attracted criticism over its location due to the special scientific significance of shifting sand dunes. But it was eventually approved by Scottish ministers.

Aberdeenshire Council’s Formartine area committee approved the plans for the second course by eight votes to four on Tuesday.

Although there were no objections from Scottish Natural Heritage, it had said parts of the course could have been redesigned to make them less susceptible to future coastal erosion.

Mr Trump handed control of his golf empire to his sons when he became President in 2017.