Donald Trump with Melania, Ivanka and a Playboy glamour model

In her first TV interview about a relationship she claims to have had with the US President more than a decade ago, Karen McDougal described bursting into tears after he offered her money following their first sexual encounter.

She said she had loved him and believed he had loved her and might marry her, even though he had at the time only just had a son with his third wife Melania.

Asked if Mr Trump ever said he loved her, Miss McDougal told CNN: ‘All the time. He always told me he loved me.’

Donald Trump is pictured with his wife Melania, his daughter Ivanka and the Playboy glamour model he is alleged to have had an affair with, Karen McDougal, at a Playboy Mansion party

In the fullest account yet from one of the women who claims to have had an extramarital sexual encounter with the President, Miss McDougal laid out the elaborate lengths he allegedly went to to hide his philandering.

The White House has strenuously denied the claims made by Miss McDougal, Playboy’s Playmate of the Year in 1998. It insists the President never had an affair with her.

Miss McDougal, who has battled to get her story heard after it was bought by a magazine but never published, claimed she had loved the billionaire and had regretted only that he had been married at the time.

Asked what she would say to Mrs Trump, who she met once during the alleged affair, the 47-year-old said: ‘What can you say except I’m sorry. I wouldn’t want it done to me. I’m sorry.’

Miss McDougal, a former nursery teacher and one-time girlfriend of the actor Bruce Willis, said she first met Mr Trump when he was filming a segment of his TV series, Celebrity Apprentice, at Hugh Hefner’s Playboy Mansion in Los Angeles.

She was hired with other Playboy models to provide some background glamour during a poolside party scene. She was 35 and single. Mr Trump was turning 60.

He had been married to Melania just over a year and she had given birth to their son, Barron, three months earlier.

As the night wore on, it became clear to her and others that Mr Trump was interested in her, she claimed. ‘I kind of smiled at it, I thought it was cute and funny,’ she said. ‘He’s brilliant and I like smart minds.’

They chatted and at the end of the night, they exchanged phone numbers, she said, adding that his number never showed up on her phone, suggesting he was blocking his identity.

They spoke regularly over the following week and arranged to meet later in the month when he was next in Los Angeles – in June 2006. For their first ‘date’, she claimed Mr Trump told her that his bodyguard, Keith Schiller, would collect her and drive her to the Beverly Hills Hotel for dinner.

She was surprised when he drove her around the back of the hotel so she could be whisked straight to a hotel bungalow where Mr Trump always stayed. They dined there and, that night, they ‘were intimate’, she said. ‘I was attracted to him. He’s a nice-looking man,’ she added, praising his ‘charisma’ and ‘great posture’. 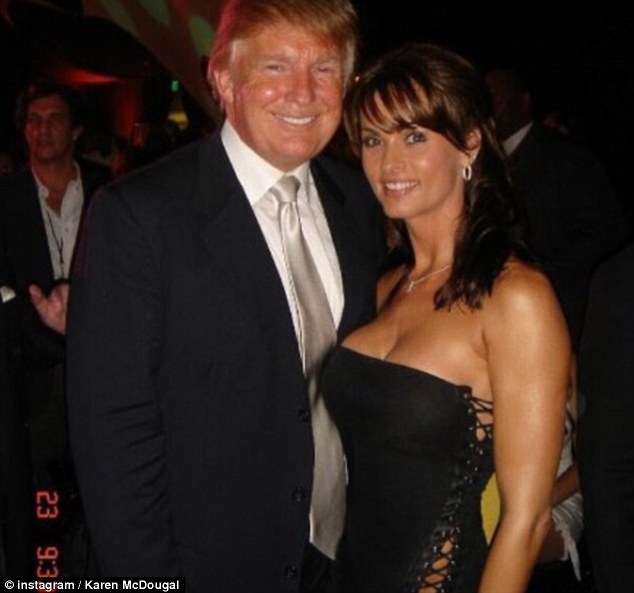 Afterwards, he tried to pay her, she said: ‘I actually didn’t know how to take that. The look on my face must have been so sad.

As Mr Trump’s bodyguard drove her home, Miss McDougal started crying: ‘I was really sad. It really hurt me. But I went back.’

She did not think she would see him again but he phoned and, feeling low having just come out of a ‘bad relationship’, she agreed to continue their affair. 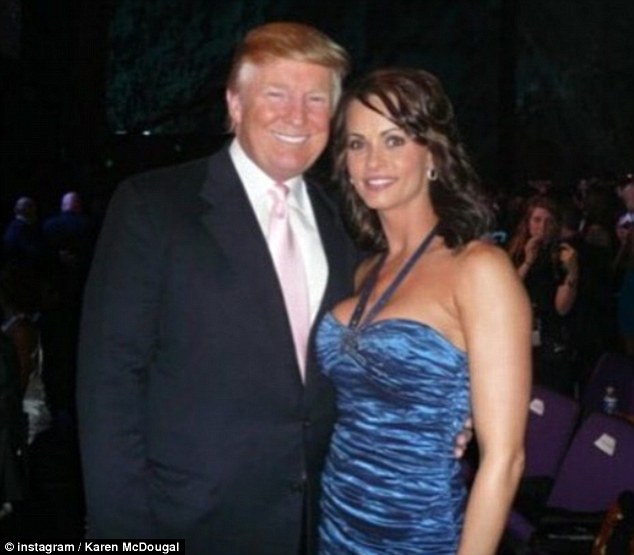 Miss McDougal claims she first met Trump when he was filming a segment of his TV series, Celebrity Apprentice, at Hugh Hefner’s Playboy Mansion in Los Angeles and the pair swapped numbers

Miss McDougal insisted Mr Trump behaved very differently to her than the bombastic bully that people saw on TV.

She said she saw a man who was ‘very sweet, very respectful, very loving, very kind and caring’.

She claims they saw each other at least five times a month, sometimes much more, and had sex ‘many dozens of times’. He never used protection, she said.

They invariably saw each other when he was visiting LA but she would also come to meet him, going to a charity golf tournament at Lake Tahoe in Nevada, his golf courses in California and New Jersey and even his home in New York’s Trump Tower. She said they would take precautions to hide their affair.

In order not to leave a ‘paper trail’ that would connect them, she would buy a plane ticket and book a hotel room – even if she wasn’t going to use it – and Mr Trump would later refund her.

Mr Schiller appeared not to be the only Trump aide who was privy to his secrets.

On her visit to the Trump Tower, where she was smuggled in the back entrance, she says she asked the President: ‘Aren’t you afraid to bring me here?’. She claims he replied: ‘They won’t say anything.’

Miss McDougal says she never mentioned Melania to him and he only brought up his wife twice. On the first occasion, he described her as an ‘intelligent woman’ who could speak several languages.

He allegedly mentioned her again as he was showing her around their Trump Tower home.

Miss McDougal claims she felt ‘very guilty’ in the family home and ‘couldn’t wait to get out – I wanted to go back to my hotel room’.

She says she ran in to Mrs Trump only once, during a party at the Playboy Mansion. They were photographed together in a group that included Mr Trump, his daughter Ivanka and other Playboy models. 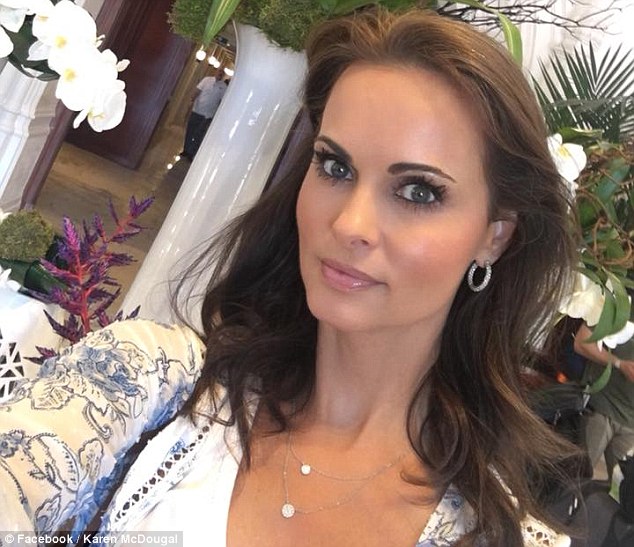 Miss McDougal, who says she voted for Mr Trump, was not paid by CNN for her interview and insisted she simply wanted to ‘share my truth’ because everyone else was discussing it.

The New Yorker magazine has already printed a shorter account in which she detailed her alleged affair. She is suing a US magazine which paid her $150,000 for her story but never published it.

She claims this was a political decision to protect Mr Trump.