Florida pastor Paula White, 53, who has a job in the White House and has been close to Trump for 18 years, said: ‘We declare that anything that’s been conceived in satanic wombs, that it will miscarry, it will not be able to carry forth any plan of destruction, any plan of harm.’

A video of the January 5 sermon was posted on Twitter by the liberal advocacy group Right Wing Watch and has been viewed more than 8million times since Friday.

The short 94 second clip prompted a furious backlash from critics.

But White claimed she was speaking in ‘metaphors’ and was merely praying for evil plans to be foiled in the lives of her congregants.

Pastor Paula White has been close to Donald Trump for 18 years. They are pictured together here during an ‘Evangelicals for Trump’ campaign event on January 3 in Miami 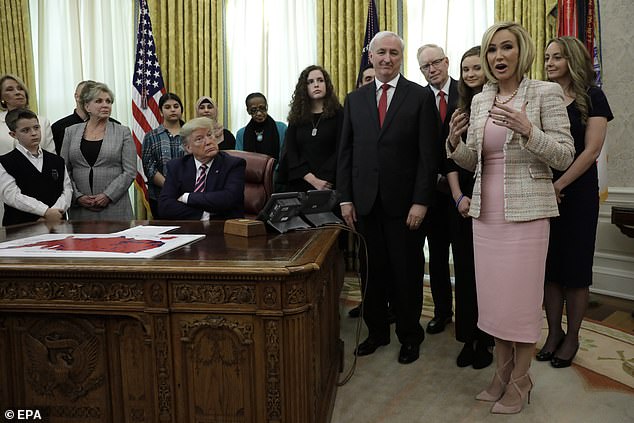 White joined the White House Office of Public Liaison as a religious adviser in October. She is pictured in the Oval Office earlier this month announcing new guidance on constitutional prayer in public schools

She tweeted yesterday: ‘I don’t normally respond but clearly this has been taken out of context.

‘I was praying (Ephesians) 6:12 that we wrestle not against flesh and blood.

‘Anything that has been conceived by demonic plans, for it to be cancelled and not prevail in your life …’

Ephesians 6:12, according to the King James Bible translation, reads: ‘For we wrestle not against flesh and blood, but against principalities, against powers, against the rulers of the darkness of this world, against spiritual wickedness in high places.’

Jennifer Gunter, an obstetrician and gynecologist who writes a column on women’s reproductive health for the New York Times, tweeted: ‘So Paula White wants everyone at @WhiteHouse to know she is praying for abortion.’

James Martin, a prominent Jesuit priest, said: ‘No pregnancies are satanic. Every child is a gift from God.

‘Jesus asked us to pray for our persecutors, not to curse them. To love our neighbors as ourselves.’ 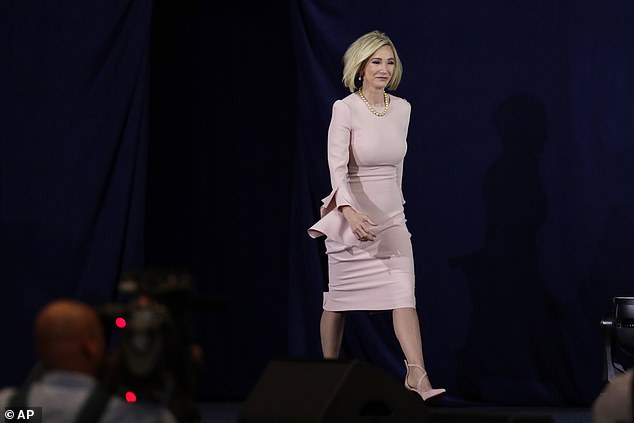 A video of the January 5 sermon was posted on Twitter by the liberal advocacy group Right Wing Watch and has been viewed more than 8million times since Friday. She is pictured here striding onto stage in Miami for a pro-Trump event on January 3 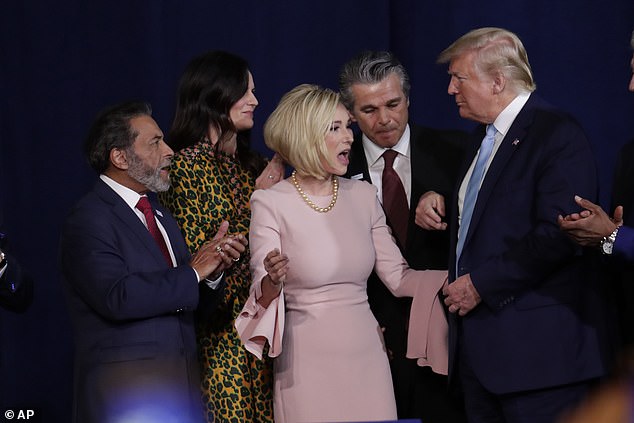 White claimed she was speaking in ‘metaphors’ and was merely praying for evil plans to be foiled in the lives of her congregants. Pictured with Trump in Janaury

But others backed her claims her comments were metaphorical.

André Gagné, a theological studies professor at Concordia University and expert on the Christian right, said White probably was speaking in metaphor when she called for miscarriages.

He cited a book by Nigerian evangelist D.K. Olukoya that describes ‘satanic pregnancies’ as ‘the plans that Satan has against a person’s life.’

Gagné concluded: ‘White is commanding that Satan’s plans be aborted.’

White preaches the ‘Prosperity Gospel,’ which says giving money to churches and religious causes brings health and wealth, and says that she and Trump had once planned to open a megachurch together.

She joined the White House Office of Public Liaison as a religious adviser in October. 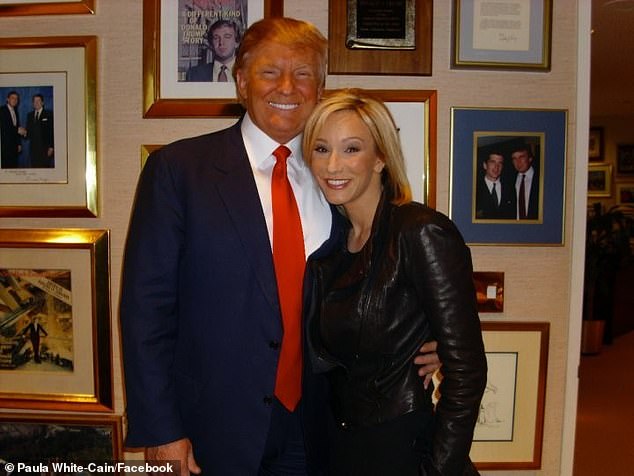 Trump and White, a televangelist, have been close for 18-years, and now she’s working for the White House – a state of affairs that makes many Christians in the West Wing uncomfortable

In her controversial sermon she also vented her fury against forces that may harm the president.

She also condemned ‘any hex, any spell, any witchcraft, any spirit of control, any Jezebel,’ and ‘anything that the enemy desires through spells.’

White is well known for her passionate sermons and also gave a vitriolic speech at a re-election rally for Trump in June where she declared that his opponents were a ‘demonic network.’

But calling for the deaths of unborn babies, even metaphorically, is unusual for White and evangelical preachers in general due to their strident belief in the right to life and opposition to abortion rights which are one of the most important political issues for religious conservatives. 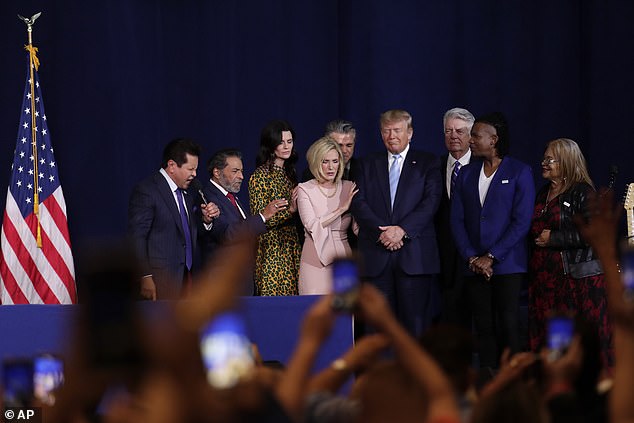 Pastor Paula White, fourth from left, and other faith leaders pray with President Donald Trump, center, during a rally for evangelical supporters at the King Jesus International Ministry church, Friday, Jan. 3, 2020, in Miami.

In a 2017 interview she said she and Trump made plans in 2006 to build a megachurch together.

White claimed Trump hired an architect and wanted her to take the project over once it was built, but a divorce from her second husband a year later sidelined everything.

She is now married to Jonathan Cain, the keyboardist from the rock band Journey.

Her first marriage collapsed after she had an affair with fellow faith-healer Benny Hinn.

Miscarriages are the most common type of pregnancy loss and happen in 10 to 20 percent of all pregnancies.  In the United States, miscarriage is defined as the death of an embryo or fetus before the 20th week of pregnancy, after which it would be considered a stillbirth.

Presidential spiritual adviser Paula White takes authority over the marine kingdom, the animal kingdom, and all “satanic pregnancies” that seek to harm Trump or the church. pic.twitter.com/pmrJEIxCHk

White and Trump first spoke in 2002 when he called her to praise her televised sermon, The Washington Post Magazine has reported.

White claims she advised him to hold back running for president in 2011, telling him: ‘I don’t feel it’s the right timing.’

When he did run she helped his campaign by arranging a meeting with hundreds of evangelical leaders.

When he was inaugurated, White was one of six clergy members who spoke at the ceremony.

In October, she joined the White House in an official capacity, advising the president’s Faith and Opportunity Initiative and handling outreach to religious groups.

White said in a sermon in November that Christians who give money to her ministry will receive life-clarifying ‘visions’ from God.

She prayed that congregants would open their wallets. ‘Maybe that’s a sacrifice of fifty dollars or a hundred dollars, maybe it’s a thousand dollars, whatever it is you speak,’ she told the Almighty.

‘Some of us are gonna get a covenant seed right now,’ she said, referring to her belief that cash donations are ‘seeds’ that grow into karma-like benefits that return to the giver in larger ways.