President Donald Trump’s threat to deploy a never-used constitutional power to force Congress to adjourn exploded hours after he leveled it Wednesday – with Senate Majority Leader Mitch McConnell showing no interest in the idea.

Trump’s threatened course has also immediately shown to face legislative and practical obstacles. One of the two chambers might have to vote to adjourn in the middle of a global crisis in order to provoke a required ‘disagreement.’

From a practical political standpoint, even if Trump were to prevail, sending Congress home during the coronavirus crisis might not be the signal he wants to send. The White House is continuing to negotiate with Congress to try to get billions to prop up the economy, with more than 20 million Americans unemployed.

A spokesman for McConnell did not exactly endorse the idea in comments Wednesday evening, after Trump floated the idea as a way to force consideration of stalled executive nominees.

President Trump on Wednesday threatened to try to force Congress into adjournment in order to install additional conservative judges and other nominees, but the idea appears dead-on-arrival

‘Leader McConnell had a conversation today with the president to discuss Senate Democrats’ unprecedented obstruction of the president’s well-qualified nominees and shared his continued frustration with the process. The Leader pledged to find ways to confirm nominees considered mission-critical to the COVID-19 pandemic, but under Senate rules that will take consent from Leader Schumer’ – a reference to Senate Minority Leader Charles Schumer of New York, he said.

Independent Rep. Justin Amash, a former Republican, tweeted: ‘Without one chamber participating in this improper scheme, this action would be unconstitutional. The president has no general, unilateral power to adjourn Congress. He may do so only in the limited “Case of Disagreement between them, with Respect to the Time of Adjournment.”

The Constitution, in Article II Section 3, gives the president the power to call Congress into session, which has happened numerous times in the nation’s history. It also states that ‘in Case of Disagreement between them, with Respect to the Time of Adjournment, he may adjourn them to such Time as he shall think proper.’

However at present each chamber has chosen to stay open and in ‘pro-forma’ session amid the coronavirus outbreak. That has stalled the confirmation of nominees – although in many cases many vacancies exist because Trump has not submitted nominations, and he has often said he prefers officials in an ‘acting’ role rather than seeking Senate-confirmed officials.

McConnell has been the archetect of a strategy that has packed the courts with Trump’s conservative nominees, but he has in some cases prioritized the lifetime appointments over administrative posts. Trump on Wednesday complained about not having new oversight of Voice of America, which he called a ‘disgrace.’

Maryland Rep. Jamie Raskin told the Washington Post  after Trump’s threat: No other president “has tried to force a collision between the House and the Senate to try and indefinitely adjourn one of the houses. . . . That would provoke a true constitutional crisis. The president has just never reconciled himself to the existence of other branches” of government.

He did so just days after clashing with governors and claiming he had ‘absolute’ power to force them the country to reopen – only to make comments the following day backing down.

He blasted senators for holding up judicial and administrative nominees, saying the Senate must ‘fulfill its duty.’

‘If the House will not agree to that adjournment I will exercise my constitutional authority to adjourn both chambers of Congress,’ Trump said.

‘The current practice of leaving town while conducting phony pro forma sessions is a dereliction of duty that the American people cannot afford during this crisis. It is a scam. What they do, it’s a scam and everybody knows it,’ he said.

The Senate is not due back until May 4th, and has been meeting in ‘pro forma’ sessions every three days, which has the effect of preventing the president from making ‘recess’ appointments.

Both houses must agree to a resolution to adjourn. The Senate is narrowly controlled by Republicans, and the House is in Democratic control.

A White House official told DailyMail.com the conditions are already there for presidential action. ‘They haven’t agreed on an adjournment resolution, so by definition they are in disagreement,’ the official said.

University of Texas law professor Steven Vladeck wrote Thursday: ‘Leave aside that the president’s own party controls the Senate and has assented to the current legislative calendar. Trump’s argument is legally implausible, practically moot…’

He added: ‘Simply put, it would take both a remarkable abandonment of tradition from Senate Republicans, and a refusal to go along from House Democrats for the president to even be in position to formally adjourn Congress. And before any of this happens, Congress would, more than a little ironically, have to return to Washington — and the Senate would have to vote to change the adjournment schedule.’

Add to that Trump would have to adjourn Congress in the midst of a crisis where he desperately needs more legislative action to prop up the economy and maintain his electoral prospects.

Congressional leaders made the decisions on going home in part to protect the health of members and staff, while still being able to quickly pass bailout legislation. When the chambers meet, members typically fly back and forth from their districts, coming in contact with numerous Americans en route.

Congressional scholar Norman Ornstein of the American Enterprise Institution told DailyMail.com: ‘He could only do it if the two houses disagree on adjournment. I wish I could count on McConnell to act in the interests of Congress and the country. But he cannot adjourn Congress without that disagreement.’ 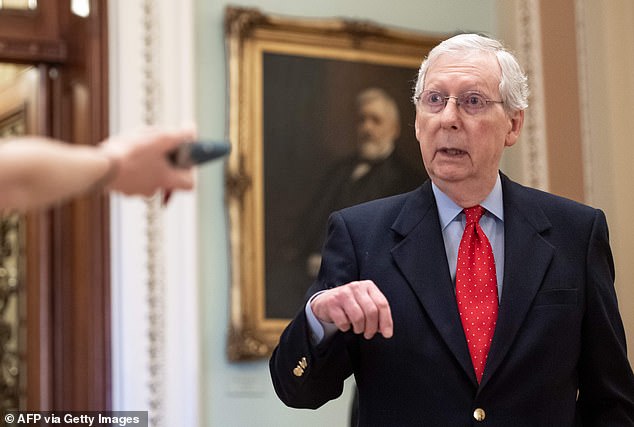 The Senate has gone home for recess amid the coronavirus outbreak. Senate Majority Leader Mitch McConnell controls the schedule 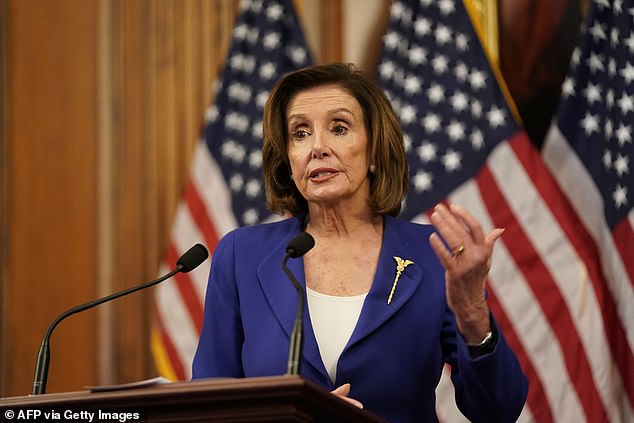 ‘It is absolutely essential that the key positions at relevant federal agencies are fully staffed and we’re not allowing that to take place through our Congress, they’re just not giving it to us. We have many, many positions that are unstaffed,’ Trump complained.

‘We have judges because we go through the process,’ he said, complaining of a ‘very unfair system.’

‘They’ll take the maximum number of hours and days, we’re talking about days, to get one judge approved. Many of these people have been waiting for two and a half years,’ he said, mentioning 129 nominees ‘stuck in the Senate.

‘We have a tremendous number of people that have to come into government. And now more so than ever before because of the virus and the problem,’ he said.

He vented: ‘The current practice of leaving town while conducting phony pro forma sessions is a dereliction of duty that the American people can not afford during this crisis.’

In 2014, the Supreme Court sided with Republicans on setting its own pro forma sessions in ruling against Obama recess appointments. ‘The Senate is in session when it says it is,’ the court ruled.