Donald Trump’s Walk of Fame Star is put behind bars

In the latest stunt against the president’s plaque, a street artist laid prison bars on top of Trump’s star saying at least for now ‘the infamous star is caged’.

The street artist, who goes by Plastic Jesus, was caught on video wearing a black hoodie as he placed the bars on top of the plaque and ran away. 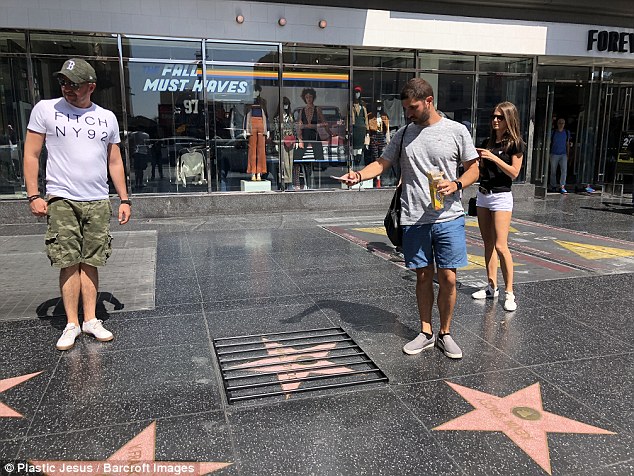 Thousands of tourists passed the plaque, many taking pictures of Trump’s star behind bars 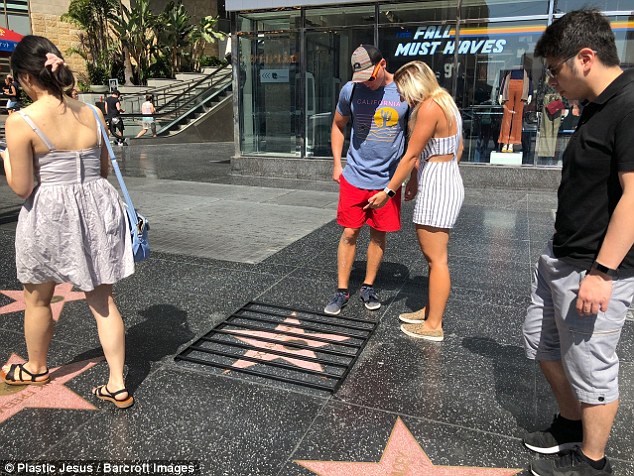 The British and Los Angeles-based artist says he used instant-drying, industrial strength, double-sided sticky tape to place the bars on top of the star on Wednesday 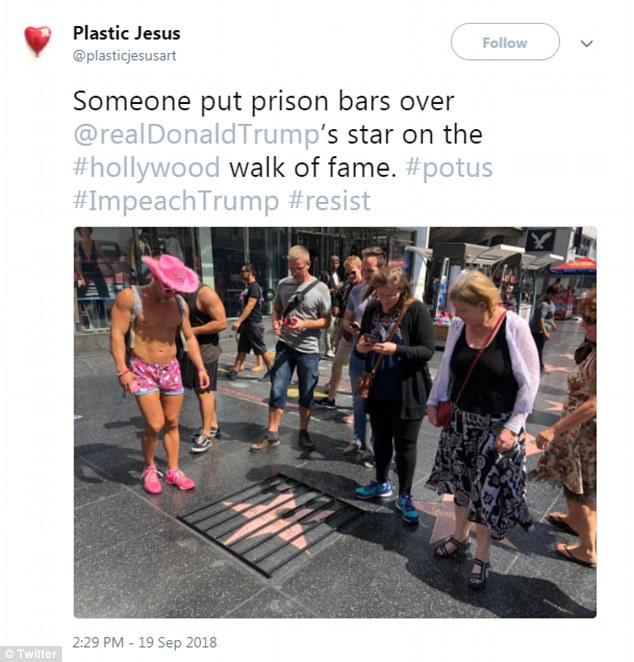 Locked up! After he placed the bars, he tweeted his final artwork saying ‘#ImpeachTrump’

Plastic Jesus says the stunt shows Trump should pay the price if he’s guilty of colluding with Russia in the 2016 presidential election.

The artist tweeted his final artwork on Wednesday writing: ‘Today I put @realDonaldTrump behind bars.’

However his art installation didn’t last long as a Trump supporter damaged it.

‘There have been calls to jail Trump since the day he was elected, and today he was certainly put behind bars,’ the artist said to Huffington Post. 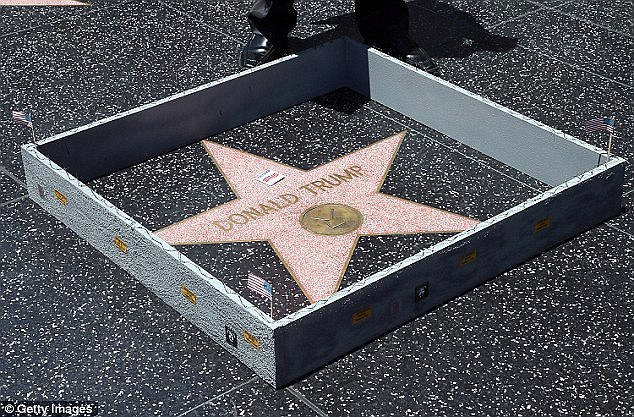 Last year Plastic Jesus set up a six-inch-high wall around Trump’s star – complete with barbed wire and American flags, protesting the president’s cry for a wall along the U.S. -Mexico border 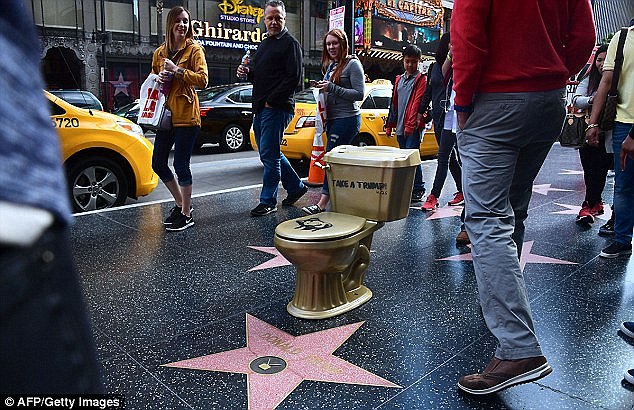 Trump’s star was installed in 2007 and has been vandalized many times, such as with this golden toilet that says ‘Take a Trump!’

‘Although it was very quickly damaged by a Trump supporter trying to remove it the bars did appear to be stuck fast and were there several hours later ― to the amusement of thousands of passing tourists,’ he added.

In 2016, the artist surrounded Trump’s star with a six-inch wall as a protest to Trump’s call for a wall to be built on the U.S. border with Mexico. His model was complete with barbed wire and a tiny American flag.

In July Trump’s star was replaced after a protester attacked it with a pickaxe, utterly destroying it and smashing in into pieces.

Austin Clay, 24, is accused of vandalism for the pickaxe stunt but has denied the charges – which carry a $10,000 fine and up to a three year jail sentence if convicted. 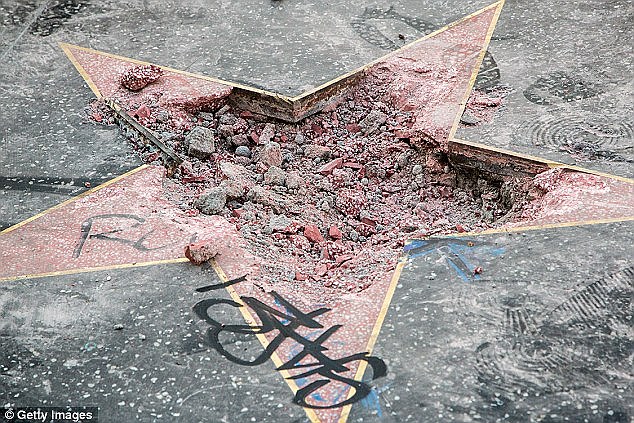 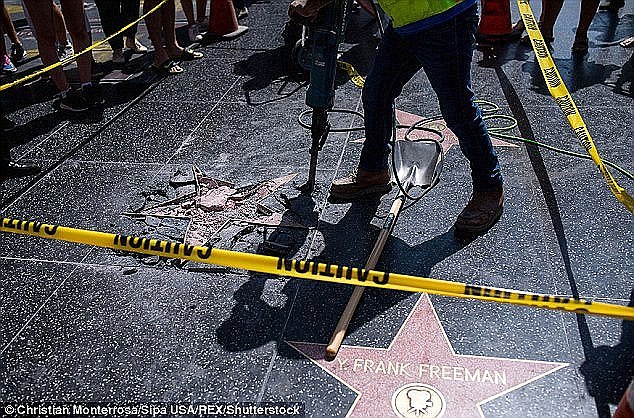 The star was speedily replaced and Clay was accused of vandalism, but he’s denied charges 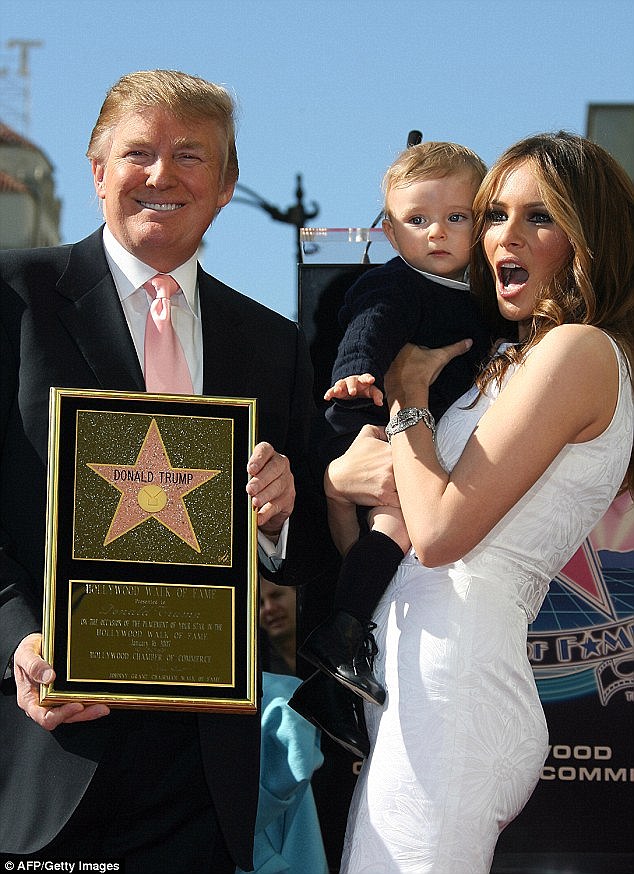 The West Hollywood City Council voted unanimously for Trump’s star to be removed in August, but no action has been taken. Trump pictured with Melania and Barron when he was honored with the star on January 16, 2007

He was caught on camera raising the axe high above his head before thundering it to the floor.

The West Hollywood City Council voted unanimously for Trump’s star to be removed in August, but no action has been taken.

Trump’s star was originally installed in 2007 commending his work for the Miss Universe pageant, however the plaque has faced repeated attacks by protesters during his time in office.