Don’t despair, however bad Brexit gets, it could be worse. Just look at Europe, says PETER OBORNE

The Brexit debate has plunged British politics into an agony of self-doubt.

After a year of political high drama and turbulence, and given the seeming parliamentary impasse over the Prime Minister’s deal, there are massive anxieties about the consequences of leaving the EU without a withdrawal agreement in place.

Will it plunge us into an economic depression as some doom-mongers predict? Will prices rocket and essential goods be in short supply? Will there be riots on the streets as the ugly new social divisions opened up by Brexit play out?

I don’t doubt for one moment these concerns are wholly understandable and we are right to focus on them.

But we should also count our blessings. We are not the only country experiencing turmoil — and for many of our neighbours it is far worse.

Around Europe, many leaders are spending Christmas contemplating chaos and confusion politically, and widespread public dissatisfaction, growing unrest and even violence. For some, economic winter is already descending.

After a year of political high drama and turbulence, and given the seeming parliamentary impasse over the Prime Minister’s deal, there are massive anxieties about the consequences of leaving the EU without a withdrawal agreement in place

Indeed, I believe the continent of Europe confronts a growing crisis which could yet cause the collapse of the EU.

So whatever our recent troubles — and there are more to come — we should remind ourselves that unemployment now stands at 4.1 per cent, the lowest level since 1975, and we have a youth unemployment rate of just 11 per cent. Since 2009, we have enjoyed solid economic growth.

Compare this with Spain. Youth unemployment is just under 35 per cent — and more than a third of young people have never had a job. Moreover, this human tragedy is directly linked to Spain’s membership of the EU because the euro has rendered large tracts of the Spanish economy hopelessly uncompetitive.

Economically, Italy’s story is even more harrowing. Its economy is barely any bigger than it was 20 years ago, employment stands at 10.6 per cent and youth unemployment is 32.5 per cent. The national debt stands at almost €2.5 trillion — more than 130 per cent of Gross Domestic Product. That money will never be paid back and Italy is heading once more for bankruptcy.

No wonder so much of the country feels total fury at distant EU bureaucrats whom they believe — and with some justice — have condemned Italy to economic failure, let alone their incompetency on migration, which Italians feel they bear the brunt of.

In Greece, the birthplace of European democracy, an epic tragedy continues to play out: membership of the eurozone has wiped out business, jobs and entire industries that will take generations to recover.

Next, let’s look at fraud and corruption. We’ve had serious problems on this front here in Britain, not least among scores of MPs who infamously were found to have fiddled their expenses. And, yes, the occasional business executive is disgraced or goes to jail. But Britain is a remarkably honest country compared with the horror show that is the EU.

Take Malta, viewed by most Britons as a holiday paradise. Last year, a dark underside came to light with the murder of a journalist investigating government corruption, including the sale of EU passports to shady figures from the former Soviet bloc. Many believe Malta escapes sanction from Brussels because the country’s deeply compromised ruling elite can be relied on to do what the European Commission tells it to do.

Romania and Bulgaria are two other countries where corruption flourishes. The culture of greed and backhanders in these two former Iron Curtain nations helps explain the poverty and mass emigration to the rest of the EU. The problem is so flagrant that the Romanian government has sacked the EU-backed chief anti-corruption prosecutor. 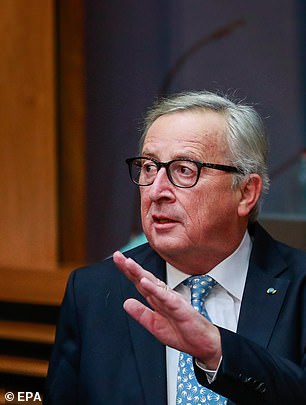 As for concerns about law and order, well we have no reason to be complacent. London has seen 131 murders this year — an increase of 38 per cent (excluding deaths by terrorism) on 2014.

There is public anxiety about the ability of our police forces to deal with everyday crimes, while the goings-on at Gatwick last week — when the drone scare brought the airport to a standstill — did us few favours in PR terms.

Politicians were slow to react, while the police, military and intelligence services were made to look foolish.

But compare that with France, where for a sixth weekend on the trot, the gilets jaunes (yellow vests) fuel protesters took violent unrest to the streets. On Friday, the riots claimed their 10th victim.

The protests are about more than France; they are of existential importance to the EU because President Macron has become the poster boy for the European project as Chancellor Angela Merkel’s star starts to fade in Germany.

Macron’s response has so far been weak. He has responded with a mixture of police brutality and concessions to rioters which so far have not worked.

As for political stability in Europe, well therein lies the greatest crisis for the EU.

Here in Britain there have been warnings that the two-party system which has governed us for more than 200 years may collapse — damaged irreparably by the Brexit fall-out. And there are menacing signs that the far-Right racist parties are on the rise, all the more so now UKIP employs the thug Tommy Robinson as an adviser.

Others worry that the UK itself could break up with Brexit sparking the secession of Scotland. I don’t dismiss for one moment the reality of these fears — but consider that only Italy’s government, out of the EU’s Big Four (France, Germany, Spain), has strong support and a clear majority.

And that is for the so-called ‘government of change’ — made up of two populist parties — which has flouted EU edicts on a budget, and rails against immigration policies.

Consider also the bitter dispute between Madrid and the Catalan separatists, whose leaders either await trial at home or are in exile.

In Germany, social democracy is on the wane and the far-Right poses a menacing threat with the electoral successes of the popular nationalists of the neo-fascist Alliance for Germany party.

Even Belgium, the headquarters of the EU, is in a political shambles. Prime Minister Charles Michel resigned just before Christmas, leaving a vacuum, while concerns about chronic unemployment and immigration fester.

Farther east, the situation is much more menacing with the rise of far-Right parties exploiting popular fears about immigration. Poland and Hungary, both at daggers drawn with Brussels, increasingly present a chilling authoritarian alternative to the EU model of liberal democratic politics.

Brexit confronts Europe with a fresh problem. As one of the biggest financial contributors to the EU, we have been essential for balancing the books.

At a time of economic stress, Germany, Holland and the other large contributors will refuse to pay more. However, supplicants such as Bulgaria and Romania will be furious at receiving less.

Elections are due next spring for the European Parliament and these may prove a shock to the EU elite as Right-wing parties score more significant gains. We will see new populist politicians emerge who make Nigel Farage look like a hand-wringing local vicar.

There is no question the EU is about to enter the greatest crisis in its 60-year history — and Brexit is a tiny part of it.

This is not a reason to gloat. Trouble among out closest neighbours will hurt us badly at home. We are entering truly troubling times, but we should keep a sense of perspective this Christmas and remind ourselves we have every reason to feel pride in the stability, prosperity and decency of 21st-century Britain.