Don’t letter go! Girl, four, is saved when dress snags on lettering after she falls off Thai roof

Don’t letter go! Girl, four, is saved when her dress snags on lettering after she falls off Thai hospital roof while chasing a gecko

A four-year-old girl who plunged from a hospital rooftop in Thailand was saved when her dress snagged on lettering on the side of the building.

The toddler was hauled to safety after her loose-fitting red dress became caught on the first letter of the Thai alphabet – tortao – on a sign showing the name of the hospital.

She accompanied her father for his treatment but wandered away from the ward at the Paholpolpayuhasena Hospital in Kanchanaburi, central Thailand on Sunday afternoon.

The four-year-old girl is seen hanging from the lettering on the side of the hospital in Kanchanaburi, central Thailand on Sunday

She then pushed through a fire escape door and climbed the stairs before running onto the roof of the seven-storey building, where she began chasing a small gecko.

The Burmese youngster, who has not been named, said she was following the lizard when she climbed over the side of the building and dropped below.

A guest called the hospital staff after he heard a child screaming outside the window. Six nurses then rushed to the roof and were shocked to find the girl hanging in midair.

Incredibly, the women managed to reach down and rescue the girl, who was also clinging on with her hands to the large letter.

One brave nurse climbed down to grab the girl’s hand while others held onto her body. A bystander on the floor below stood on the balcony prepared to try and catch the girl if she fell. 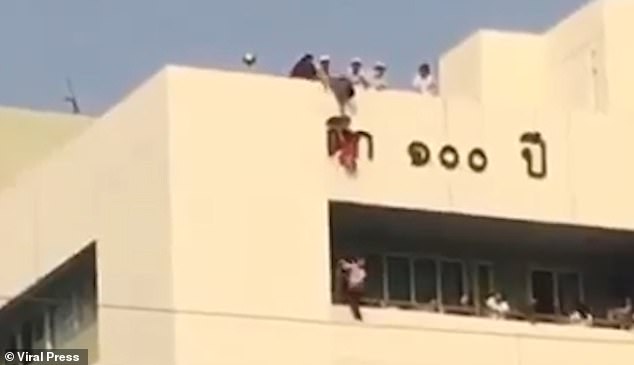 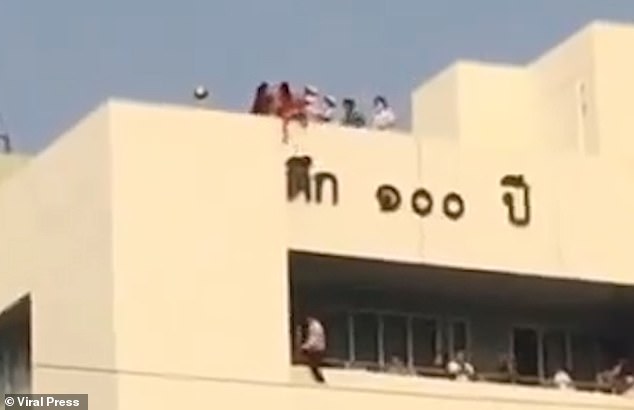 A group of nurses managed to pull the young girl safely over the edge of the building. She was taken inside for a check-up but had no major injuries

The four-year-old was eventually carried safely away from the scene, but was said to be in shock from the incident.

Her father said he was being treated in a patient room located on the seventh floor while his daughter was playing on the ward.

He said he became concerned after noticing she had disappeared for a long time.

He said: ‘My girl was running and trying to catch a lizard to the seventh floor. I let her because that’s what a child like to do. But I had no idea she would follow it up to the roof. I only realised she was missing when it was too late.’

Somjed Laoluekead, the director Paholpolpayuhasena Hospital, said: ‘We took the girl for a physical check-up and found no serious injuries. She only had bruises and scratches.

‘She was safe and went home with her cousins the next morning.’