Tory Spartans today urged MPs to set aside their differences over Brexit to support council candidates after several were attacked ahead of Thursday’s elections.

ERG chairman Jacob Rees-Party has cancelled tonight’s meeting of Eurosceptic backbenchers because it clashes with Tory HQ’s phone canvassing efforts and said: ‘I am urging all the ERG’s supporters to canvass’.

Mr Rees-Mogg is the latest senior Brexiteer to urge voters not to punish Tory candidates over the Brexit deadlock at Westminster.

He said: ‘It would be grossly unfair for local Conservative councillors, who are doing a good job the length and breadth of the country, to suffer because of the national party’s reputation’.

Tory bosses have urged MEP candidates to avoid talking about Brexit ahead of the May elections after several local members were attacked, it was claimed today.

Theresa May’s party could lose 1,000 councillors on Thursday and more than half of her 19 MEPs on May 23.

Mrs May insists she can get a Brexit deal through Parliament to avoid European elections – but Tory HQ has reportedly pencilled in the launch of its campaign on May 7. 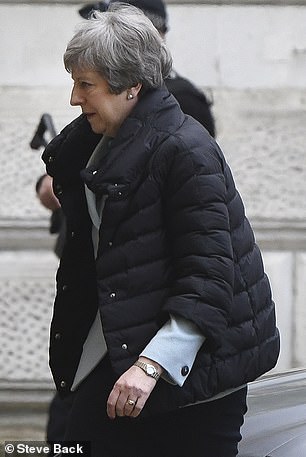 And party mandarins have reportedly urged candidates to lie low because of the fury about Brexit – as two council candidates were beaten on the doorstep.

In South Gloucestershire Brian Hopkinson, 70, was ‘pushed violently’ and choked by a voter waving a Tory leaflet while the victim was forced to apologise for ‘any offence the leaflet could have caused’.

He said: ‘I offered to take it back if he didn’t want it. Next thing I knew he rushed towards me, pushing me against the wall and wrapping his hand around my throat, digging his fingers right in.

‘I managed to break free and back off away from the property, at which point he shouted at me, threatening to kill me.’

Last week Carla Hales was punched and called a ‘Tory b****’ while out campaigning in Colchester, Essex and her local party leader Darius Laws said the attack was a ‘politically motivated assault’.

Mrs May enjoyed a ‘ladies night’ with Tory women at an exclusive London hotel last night. The Prime Minister posed with cabinet ministers including Liz Truss, Amber Rudd, Andrea Leadsom and Caroline Nokes as it emerged she could lose 1,000 councillors on Thursday and more than half of her 19 MEPs on May 23.

No 10 has refused to comment on the picture from the Goring Hotel posted by Ms Truss on Instagram last night with caption: ‘And it’s ladies night…#cabinetandfriends #girlpower’. MailOnline understands it was a Tory party event celebrating its women. 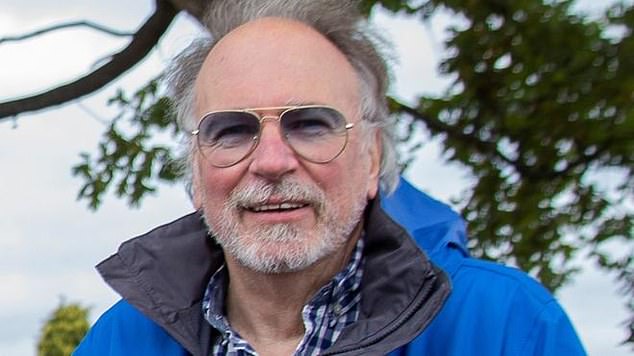 Brian Hopkinson, 70, was ‘pushed violently’ and choked by a voter waving a Tory leaflet 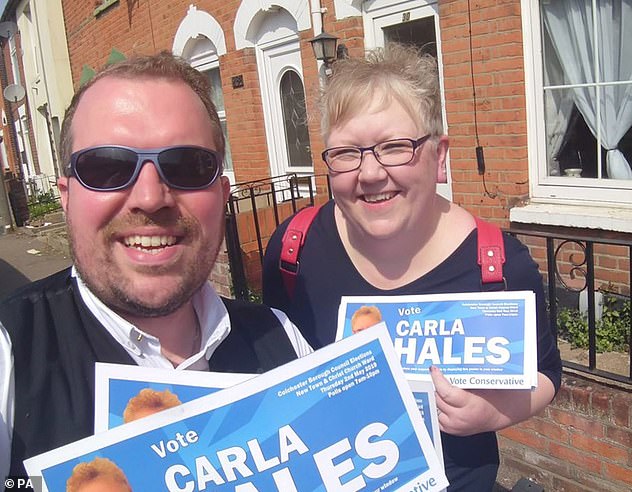 Just one in three voters believe the Tories are pro-Brexit, poll finds

Only a third of voters believe the Conservatives are a party that wants to leave the EU, a new poll revealed today.

Theresa May’s Tories are trailing behind Nigel Farage’s Brexit Party and Labour ahead of the European elections on  May 23.

But voters are also confused about Jeremy Corbyn’s party’s stance on Brexit.

One in four people say they ‘don’t know’ if Labour wants to leave the EU or not.

A senior source told The Times: ‘It was striking that during recess when Brexit was off the boil and attention was away from Westminster that the canvass returns got a lot better. I think there’s a general desire to keep Brexit out of the news as much as possible to allow the focus to be on other issues until then’.

Tory HQ has denied the claims in The Times and a spokesman said: ‘We’re focused on locals but we’re making responsible preparations for the European elections should it not be possible for the government to ratify a deal that allows us to leave the European Union before May 23, 2019’.

Boris Johnson has begged voters to ignore the Brexit chaos at Westminster and back the Conservatives as the party faces a backlash from the electorate this week.

The favourite to replace Theresa May has asked people going to the polls on Thursday to back ‘hard-working Tory councillors’ despite their anger over ‘our current dismal failure to leave the EU’.

While Jacob Rees-Mogg begged: ‘Please don’t let Brexit put you off voting Conservative in the Local Elections on Thursday’.

Analysis by Tory election expert Rob Hayward yesterday predicted the Conservatives are on course to lose more than 800 council seats – but some senior Tories fear the party could lose more than 1,000 of the 4,628 seats it is defending if voters decide to stay at home in protest at the failure to leave the EU.

Former minister Priti Patel warned last night the ‘the mood is dark’ on the doorstep – and last week a Conservative candidate in Colchester was beaten so badly she thought she had been stabbed.

Mr Johnson said: ‘I think [the voters] know how much good they do and how much we all rely on them. 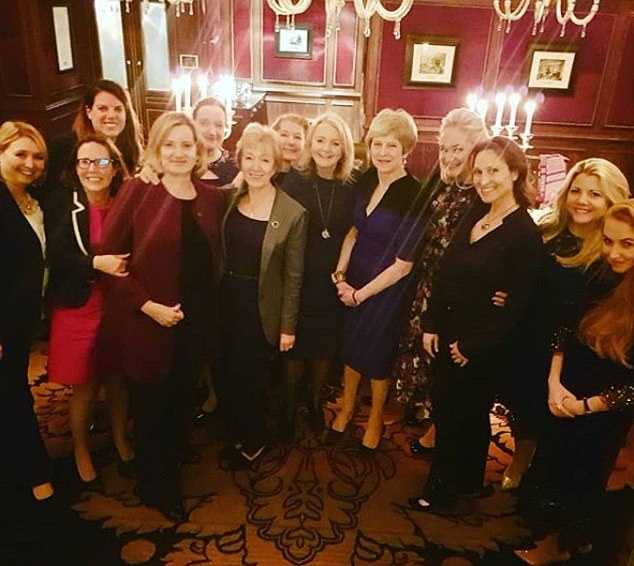 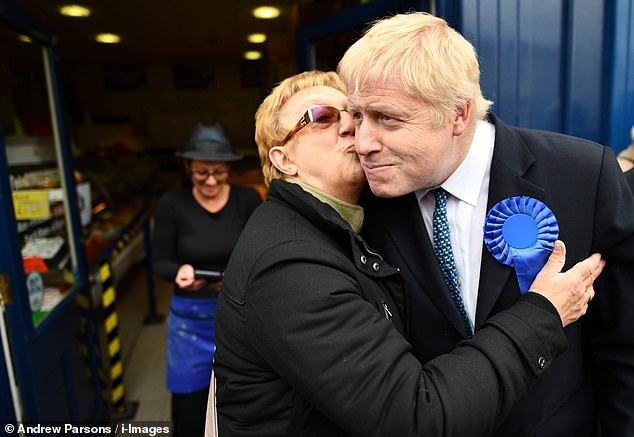 Boris Johnson, pictured campaigning in Walsall this weekend, has urged voters not to punish the Tories in local elections over Brexit

‘So much depends on their efficiency and responsiveness and capacity of those councillors. They can make all the difference for many families between misery and contentment.

Jacob Rees-Mogg: Voting for Farage will soon give Corbyn the keys to No 10

The Brexiteer said any Tory MPs or councillors who votes for Nigel Farage’s party must be axed.

He said: ‘I greatly respect Nigel Farage and I fully understand what my sister Annunziata is doing in supporting them but I don’t think it’s the right way to do it.

‘If we get to a General Election with the votes split between the Conservative party and the Brexit Party, all that does is let Jeremy Corbyn in who doesn’t deliver Brexit at all because the Labour party is quite hostile to it.

‘So what we need to do is ultimately reunite the Conservative party – but that’s a little way off at the moment.’

‘That is why it matters so much who we elect on Thursday – and that is why I hope people will vote for the councils that deliver the best services for the best value; and that means the Conservatives.’

He added in his Daily Telegraph column: ‘We have many superb and public-spirited people working in local government, and we should trust them now with more responsibility – and accountability – for the vast budgets that they spend.’

The Conservatives are heading for their worst local election defeat in more than 20 years as voters and activists prepare to punish Theresa May over Brexit.

The party’s deputy chairman Helen Whately acknowledged there was ‘a lot of anger’ over the party’s failure to deliver Brexit.

Mrs Whately told Sky News: ‘The local elections are going to be difficult. People see it as the opportunity to send a protest and that could well hit the figures for us.

‘I feel sorry for councillors who are standing and it is really important to remind people that this is about your local services and who you want in local government.’

A heavy defeat is likely to set off a fresh wave of demands for Mrs May to name a date for her departure.

The PM has yet to respond to a formal request from the 1922 Committee of Tory MPs to set out a departure ‘timetable’ to allow for the election of a new leader.

Downing Street is planning a fightback, with Tory whips telling MPs they hope to bring back key Brexit legislation in the hope of showing Mrs May can still deliver on her promise to lead the UK out of the EU.

He said: ‘This was always going to be difficult because the seats the Conservatives are defending were won on a very good night for them in 2015. But the results are unquestionably going to be worse because of the current situation.

‘There was a noticeable dip when the Prime Minister agreed to delay Brexit. That has calmed down a bit because there has been less debate about Brexit in the last fortnight. But at best, the Tories are at the crest of a trough.’

If the results are as bad as forecast it will be the worst result for any governing party since 2003 when Mr Blair lost more than 1,100 seats following the Iraq War.

Some 8,374 council seats are up for grabs in England and 460 in Northern Ireland on Thursday. 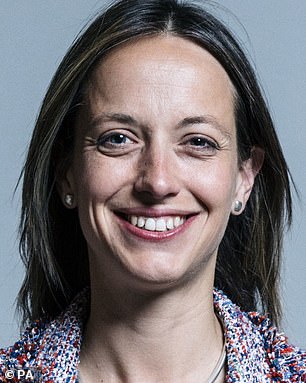 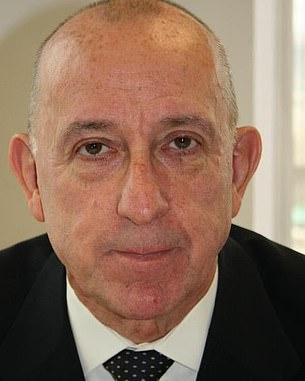 The seats were last contested in 2015, on the same day that David Cameron delivered a surprise Tory win in the General Election.

Mrs May could find relief in the fact that Tory voters have few places to go. Ukip, which secured 13 per cent of the vote in 2015, is contesting fewer than one in six seats while neither the Brexit Party nor Change UK field candidates as they focus on next month’s European elections.

The analysis by Lord Hayward suggests that the Liberal Democrats will be the main beneficiaries, with Sir Vince Cable’s party on course to pick up more than 500 seats.

‘It is counter-intuitive, but you could see some Tory Brexit supporters voting Lib Dem to register a protest vote against the establishment,’ he said.

Labour is set to gain around 300 seats. Ed Costelloe, chairman of the group Conservative Grassroots, said many Tory councillors were feeling ‘very nervous’ about the way Brexit was dominating conversations on the doorstep.

‘People just want to talk about Brexit and the position of the Prime Minister and don’t focus on local issue,’ he said.

Party Treasurer Sir Mick Davis is said to be in ‘complete despair’ over the Brexit crisis, with donations drying up.

Sir Mick was yesterday reported to have told one donor he had been ‘deserted by both Remain and Leave donors and therefore I am unable to run CCHQ and ensure we are capable of fighting and winning elections.’