Sgt Stephen Hughes, of Dorchester Police, is also accused of saying he wished another female PC, the mother of a young child, was his mum ‘so he could suck on her breasts’

A police sergeant has been accused of belittling female officers by telling one to make the tea because ‘you’ve got the t**s’.

Sgt Stephen Hughes, of Dorchester Police, is also accused of saying he wished another female PC, the mother of a young child, was his mum ‘so he could suck on her breasts’.

And he was allegedly overheard putting down a third woman officer who had been off sick with an ear problem by telling their inspector ‘she’ll be back soon – not that she has anything between her ears anyway’.

Four part-time female officers who worked under Sgt Hughes lodged complaints against him, claiming he made derogatory comments, undermined their confidence and made them feel stupid and embarrassed them in front of colleagues over almost a two year period.

They alleged incidents happened at Dorchester police station in Dorset between April 2014 and January 2016.

A misconduct hearing held at Dorset Police Headquarters in Winfrith, heard one of the women is no longer a police officer and the other three transferred to different teams because of the way they felt they had been treated by Sgt Hughes.

But Darren Bartlett, representing Sgt Hughes, told the misconduct panel comments made to officers were ‘just banter’ and when he questioned them about work it was to make them better police officers.

The hearing heard from one of the officers, named only as PC C, who said she overheard a conversation between Sgt Hughes and Insp Marsh.

The inspector asked after the welfare of PC B, who had been off sick. She said the sergeant said ‘she’ll be back soon – not that she has anything between her ears anyway.’

PC C said: ‘He thought his comment was funny because he laughed.

‘I didn’t see it as a joke to make about people when they are not there.

‘I believe Inspector Marsh was embarrassed because he walked out.

‘I thought she (PC B) needed to know. I would expect someone to tell me if that was the situation. I don’t expect to hear that from colleagues.’

The hearing heard that on April 4, 2015, Sgt Hughes made the comment about breastfeeding to PC D while at parade.

Witness PC C said: ‘Out of nowhere he said something like he wished she (PC D) was his mum so he could suck on her breasts.’

Another office, PC F, broke down as she described her life being hell for the last four years.

She said she first worked with Sgt Hughes after returning to work from maternity leave.

She said initially the superior officer was supportive but issues began to arise from January 2015 when she asked to go home as her daughter’s chicken pox had become infected and her condition worsened. 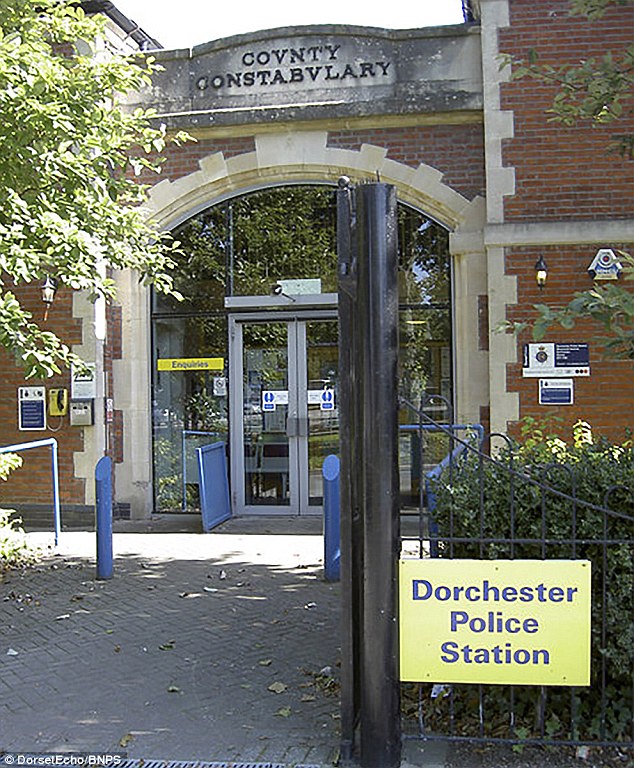 Sgt Hughes is accused of breaching the standard of professional behaviour for authority, respect and courtesy, equality and diversity, and bringing discredit upon the police service

PC F said Sgt Hughes would not let her leave for several hours despite there being no pressing need to remain on duty and told her she would have to take it as annual leave, which was not true as the force has a time off for dependants policy.

She said on another occasion while in the corridor to the parade room, he asked if she was going to make the tea and when she asked why he answered something like ‘well you’ve got the t**s’.

Sgt Hughes admitted this was inappropriate and unprofessional and was spoken to by his superior at the time. He claims he changed his behaviour, particularly to do with sexual innuendos, after this point.

In a particularly traumatic case involving a murder where PC F was assaulted by the suspect, she said Sgt Hughes later questioned her about why she had handcuffed the man and then made jokes to the rest of the squad about her wrongly handcuffing people.

She said: ‘I was upset and traumatised. The last thing I wanted was to come back and be questioned about what I had done.

‘He made me feel small, silly and that damaged my confidence, I don’t expect a sergeant to be joking about that (wrongly handcuffing people) in a parade room.

PC F told the hearing there were ‘so many’ incidents she could not cover them all in her statement.

She said: ‘When you add it up as a total, over a long period of time, it wears away at you. Each time hit my confidence, each time made me feel lower.

‘My life has been hell for the last four years.

‘I didn’t raise issues with him as they came up because he wasn’t approachable, I didn’t want to show weakness and it wasn’t something I had accepted until I plucked up the courage to tell somebody.

‘I already felt like I had to prove myself because I was part-time.’

Sgt Hughes is accused of breaching the standard of professional behaviour for authority, respect and courtesy, equality and diversity, and bringing discredit upon the police service.

He denies the allegations and is due to give evidence at the hearing later in the week.