Seven Iranian migrants have been rescued from a small dinghy in the English Channel.

The Dover coastguard and Royal National Lifeboat Institution launched into action at sea after the men in the boat called 999 as soon as they got close enough to land, at about 2.30am.

Border Force officials brought the migrants onto British shores after finding them two miles from the coast.

The seven people are currently waiting to be interviewed by immigration officials.

Seven migrants, all men aged between 19 and 54, who said they were Iranian, were found.

They have been given a medical assessment and do not require treatment. They will be interviewed shortly by immigration officials.

A Home Office spokesman said: ‘On the morning of 9 November, HM Coastguard and the RNLI intercepted a group of migrants in the channel in a small RHIB approximately two miles off Dover.

‘Seven men, aged between 19 and 54, who presented themselves as Iranian were found. They were given a medical assessment by paramedics but were found to be fit and well.

‘They are now being interviewed by immigration officials and their cases will be dealt with according to the immigration rules.’

They added: ‘The alarm was raised by those on board the vessel.’

A spokesman for HM Coastguard said it was ‘currently assisting Border Force with an incident in the Dover Channel’.

The port has not been affected by the incident.

There has been a spate of attempts to cross the channel in the last week.

It comes after 15 migrants claiming to be Iranian were found in two separate incidents last weekend.

Eight people were found in a rigid hulled inflatable boat (RHIB) in the channel off Dover, Kent.

Two people also on the boat were arrested for suspected people smuggling offences.

Another dinghy was found on the shore with seven men on board.

Charlie Elphicke, MP for Dover and Deal, said: ‘This incident shows again how reckless smugglers will be to help illegal immigrants break into Britain.

‘They will also target small ports and beaches in the hope they are less well-resourced.

‘That’s why we need to invest in more boats and trained officers to patrol the whole border effectively – not some Dad’s Army-style volunteer scheme that has been suggested.’

On November 1 a total of 21 Vietnamese migrants were found in a refrigerated lorry carrying sparkling water at Newhaven, East Sussex. 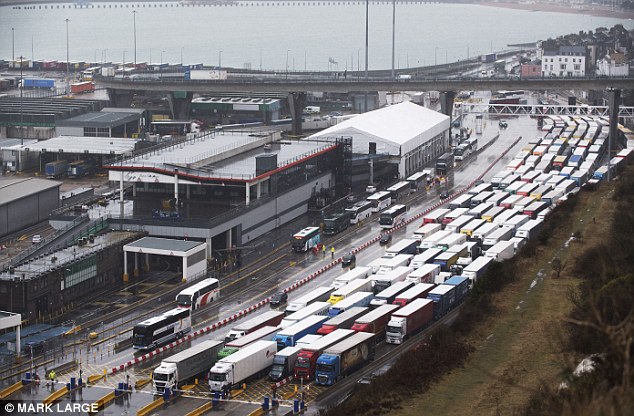 Dover coastguard are assisting the UK Border Force with an ‘incident’ in the English Channel, it is understood (stock image)