‘You don’t stop thieves by leaving the door open’: CHARLIE ELPHICKE begs Home Office for clear plan to tackle migrant crisis that he says has been ignored for too long

More than 200 migrants have arrived on the Kent coast in small craft in the past two months. The scale of the problem is unprecedented.

No matter how cold the nights become or how rough the seas, the migrants huddle on board unseaworthy vessels risking their lives and those of their young children.

For too long, the Home Office has not been taking this seriously enough and the crisis has continued to escalate.

So I welcome the Home Secretary’s declaration that this is a ‘major incident’, and that he has taken personal control and appointed a Gold Commander to oversee the Government’s response.

More than 200 migrants have arrived on the Kent coast in small craft in the past two months. The scale of the problem is unprecedented, claims Charlie Elphicke (pictured)

Yet there now needs to be a clear plan to defeat the traffickers, to put an end to these dangerous crossings before there is a tragedy in the Channel. It should start with a modern Dover Patrol to act as a powerful deterrent to people seeking to break into Britain. There are five Border Force cutters – yet just two of them operate in UK waters, covering 7,000 miles of coastline.

In contrast, 600 cutters patrol the much shorter Italian coastline and 147 cover Spanish waters.

Two of our cutters are in the Mediterranean and one is on ‘standby’.

You don’t deter burglars by leaving your front door open. So it’s no surprise the Channel is being sold as an easy passage by ruthless people traffickers. That’s why all five cutters should be patrolling our coast, to help us catch the traffickers who many suspect drop off migrants in dinghies as soon as they enter British waters, then disappear. 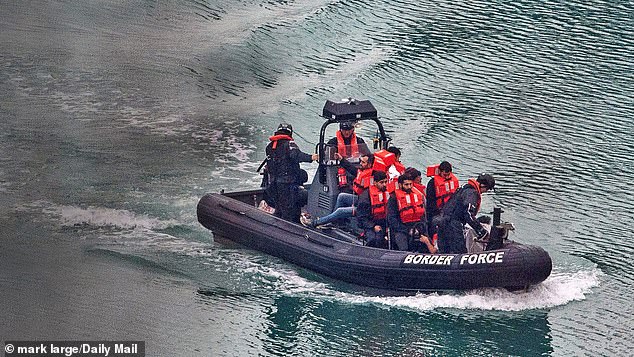 It would also take the burden off local lifeboat crews who have been making so many of the rescues. These incredible volunteers will go out to anyone in distress, no matter who they are or where they come from.

We need to see more action from the French too. In January last year Britain handed over an extra £44.5 million to France for border security in Calais. So what is President Macron doing to tackle the crisis along his coastline, and why has he allowed a trafficking network to flourish in his country?

The French need to act now. We all know what happens when things get out of control: Calais becomes a migrant magnet. The result last time was the Calais Jungle where 10,000 people lived in misery and squalor. People traffickers roamed free exploiting the vulnerable, and terrorising tourists and truckers on the roads to Calais. Only after a hard-fought campaign was the Jungle dismantled, and the number of migrants being trafficked plummeted. We cannot risk allowing the bad old days to return. Make no mistake, these ruthless traffickers will seek to exploit our leaving the EU too if they can.

There needs to be more investment in our border security; in more fully-trained, skilled officers, intelligence and effective computer systems. This cannot be done on the cheap with the half-hearted Dad’s Army-type set-up suggested by the Home Office in the past.

It’s time to for all five Border Force cutters to be put to work, establishing a modern Dover Patrol. Time for the French to step up action on their side to stop the trafficking networks and prevent people from attempting dangerous crossings. And time for greater investment in our borders to make them safer and more secure.

This way we can put an end to the Channel migrant crisis.