Dow closes down ANOTHER 558 points – losing 4.5 per cent for the week

Dow closes down ANOTHER 558 points – losing 4.5 per cent for the week as trade worries flare and tech stocks plummet

U.S. stocks have fallen sharply, as the market posted its third weekly decline in four weeks as trade fears continue to rattle investors.

The latest wave of selling sent the Dow Jones Industrial Average plunging 558 points on Friday. The blue chip average lost more than 1,000 points this week, shaving 4.5 percent of its value.

Traders have been worried about worsening trade relations between the U.S. and China – fears that took a turn for the worse this week with the U.S.-ordered arrest of a senior Chinese technology executive who is heiress to a tech empire.

Meng Wanzhou, 46, was arrested in Canada’s Pacific coast city of Vancouver on Saturday while changing planes during a trip from Hong Kong to Mexico — ratcheting tensions between the U.S. and China just as the countries’ leaders agreed a truce in their trade war. 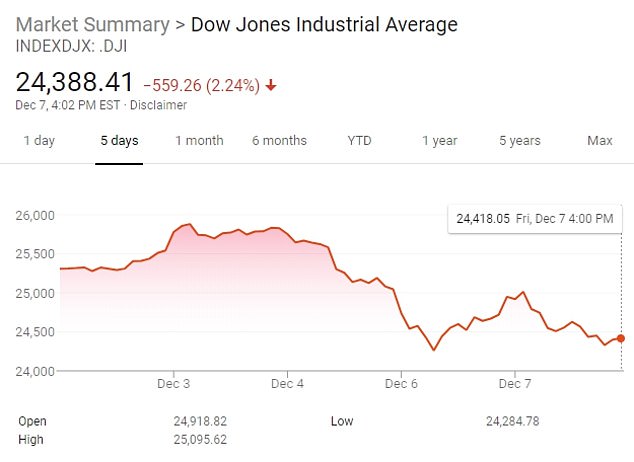 A five-day view of the Dow shows a week of losses, in which the index shaved 4.5 per cent

Meng, the CFO of Huawei and daughter of the company’s billionaire founder, is accused of lying to US banks about the use of a covert subsidiary to sell to Iran in breach of sanctions.

A Canadian government lawyer asked the court on Friday to deny her bail, saying she has been accused of ‘conspiracy to defraud multiple financial institutions’ and if convicted faces more than 30 years in prison.

The lawyer said that Meng had personally denied to American bankers any direct connections between Huawei and the subsidiary, SkyCom, when in fact ‘SkyCom is Huawei.’ SkyCom’s alleged sanctions breaches occurred from 2009 to 2014.

He suggested that Meng has also shown a pattern of avoiding the United States over the past year since becoming aware of the investigation into the matter, argued that she has no ties to Canada and has access to vast wealth and political connections — and thus poses a flight risk. 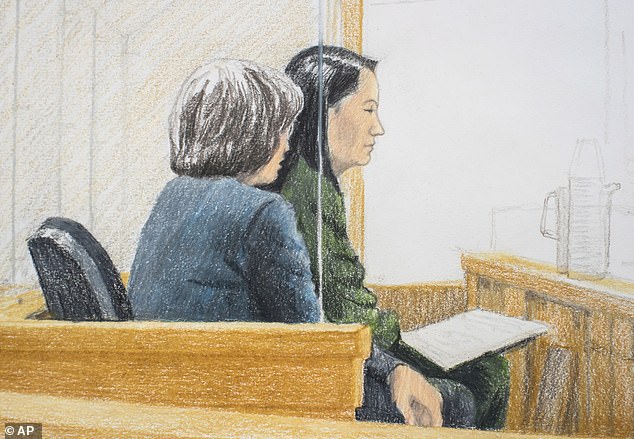 In this courtroom sketch, Meng Wanzhou, right, the CFO of Huawei Technologies, sits beside a translator during a bail hearing at British Columbia Supreme Court in Vancouver, on Friday

Meng’s detention in Canada came on the same day as a summit at which US President Donald Trump and his Chinese counterpart Xi Jinping agreed to a 90-day truce in the escalating trade dispute opposing the two economic powerhouses.

Analysts say the case against Meng likely proceeded separately within the DOJ from Trump’s trade discussions. Trump denied having any prior knowledge of the arrest before it happened, but National Security Adviser John Bolton admitted he did know.

The assurances were not enough to stem the slide of stock prices, however, amid fears that China could retaliate by taking American business travelers ‘hostage’ and trade talks could unwind completely.

On Wall Street, losses in technology and health care stocks accounted for much of the market’s slide during the week.

Utilities, which investors favor when they’re fearful, eked out a slight gain.

Traders continued to shovel money into bonds, a signal that they see weakness in the economy ahead.