Down the hatch! Stomach-churning moment a seagull attempts to swallow a foot-long rat whole

A wildlife enthusiast who grabbed her camera just in time to capture a seagull swallowing giant rat whole has told of her shock at the scene which unfolded in her garden.

Belinda Leach was making dinner when the bird appeared outside her window in Andreas, Isle of Man with the foot-long rodent in its beak.

After two failed attempts to get the beast down, the gull eventually ‘tenderised’ its prey by battering it with its beak – before swallowing it in one, on Thursday.

Wayleave officer Belinda, 55, was stunned to capture the ‘amazing’ scenes on camera and says she would be pleased if seagulls are going to clean up the island of ‘longtails’ – as Manx superstition means they won’t name rats.

However, pet owners should be on their guard as Belinda believes small animals like family bunnies would be on the menu, and her own family have lost ducklings from their pond to seagulls. 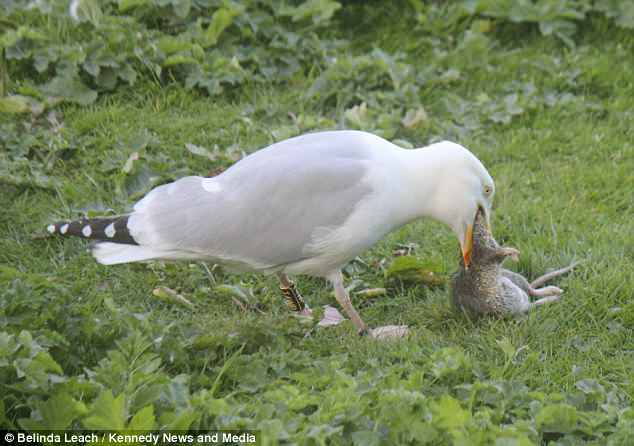 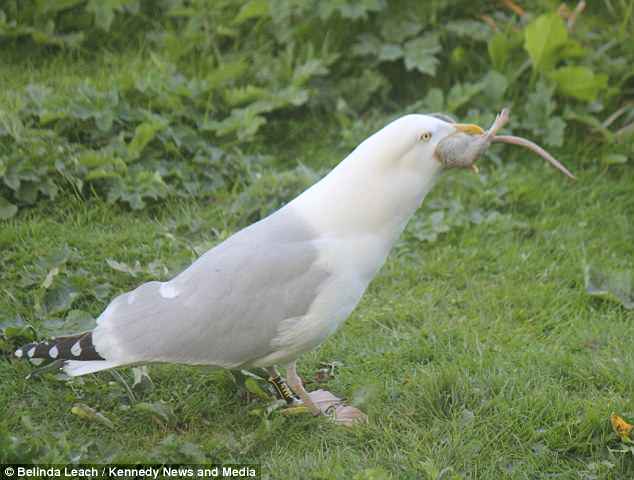 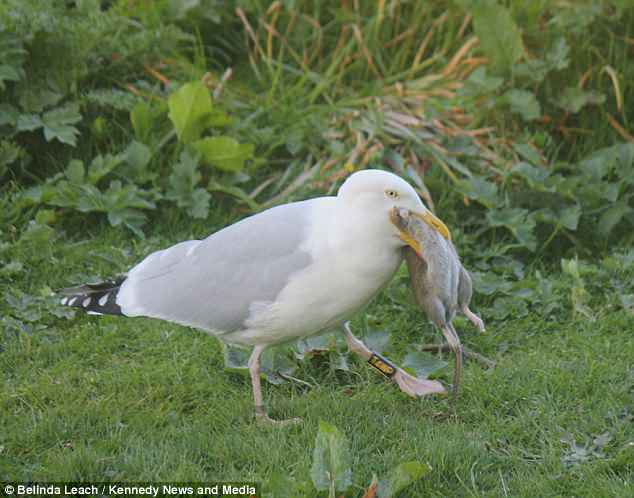 The greedy gull was attempting to swallow the rat in Belinda Leach’s garden. She ran to grab her camera just in time 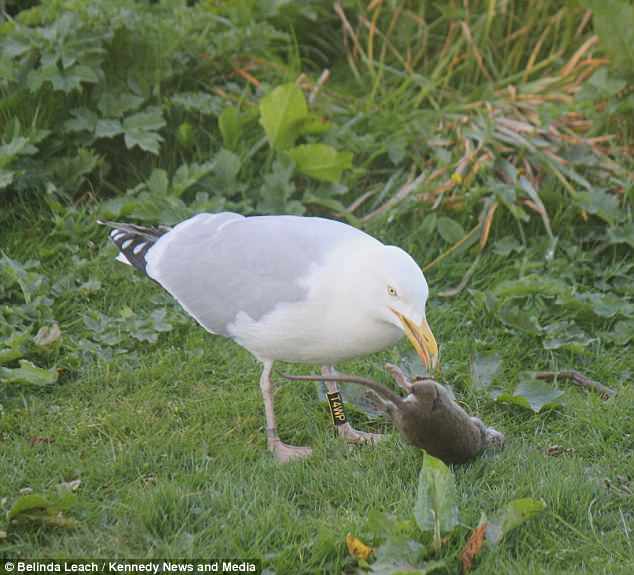 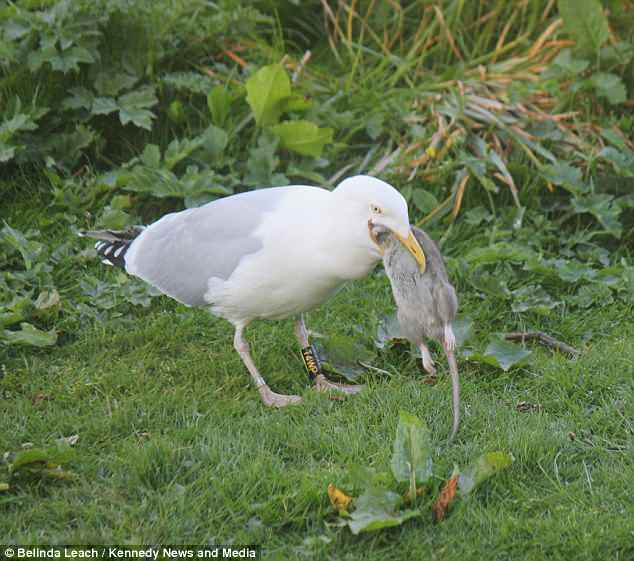 Belinda said: ‘It was an adult rat so it was big. To swallow it down in one is pretty good going.

‘It was amazing to watch, really brilliant. It took the gull three goes but in the end it was able to get it down in one.

‘It was quite fascinating to watch. It tried to gulp it down head first and it wouldn’t go down at first so it had to regurgitate it back up.

‘The gull then deliberately crunched along the back bone a few times with its beak, almost like it was tenderising the rat, I guess, making it a bit more flexible.

‘It was only on its third attempt and after about five or six minutes battling it, it swallowed it whole. I watched the back of the gull’s neck change shape as it swallowed it.

‘After gulping it down, the bird just flew off and sat on the chimney to look down on the world.

‘It looked quite amazing that in the end it only had that little bit of tail sticking out of its beak.

‘It didn’t phase the bird at all. It was quite confident. It didn’t stop him flying at all, which amazed me. I thought he’d need to hang around a bit to let it go down.’

The images show the rat’s tail is all the remains sticking out of the gull’s mouth once it has finished.

However the bird’s belly appears distended, while it’s neck is swollen to accommodate the supersized rodent.

Belinda said: ‘Seagulls are vermin too so they will eat whatever they can get hold of but even so it was a bit of shock to see this one eating a large rat.

‘It was clearly newly dead. I honestly can’t say for certain that the seagull killed it, but it may well have done.

‘The gulls will take all kinds of animals. They would take ducklings, young rabbits and so on but I never thought it would take on something of that size.

‘We have ducks and a lot of wildlife in our garden and we have lost a lot of ducklings off our pond to them, but I still didn’t expect this.’

Belinda was pleased to see seagulls turning on rats, which she says Isle of Man locals are superstitious over and, like Lord Voldemort, will not say by name. 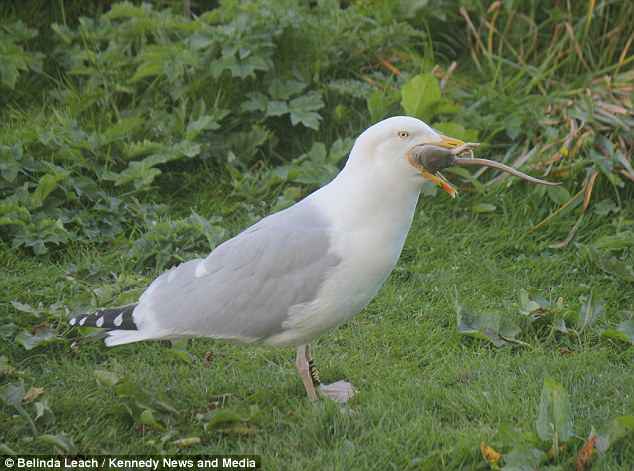 Belinda Leach was making dinner when the bird appeared outside her window with its own meal in Andreas, Isle of Man 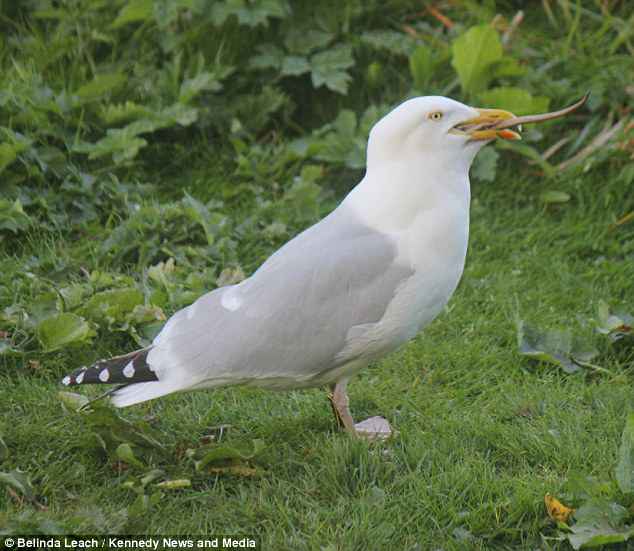 Nearly there! The seagull would not quit and battled on in Belinda Leach’s garden as she watched in shock 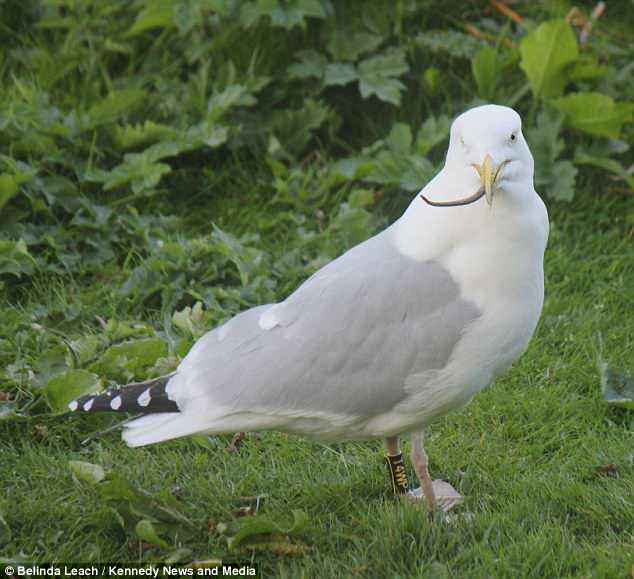 Success! The seagull managed to get the seagull down and even stared down the camera when he finished

Belinda said: ‘We don’t call them rats on the Isle of Man. I have to touch wood after saying that. It’s a superstitious thing.

‘On the Isle of Man they are either called longtails, queerfellows or we spell it out. Young people sometimes call them ringies because of the rings on their tails.

‘But we do not say that word as that is bad luck. They are not seen as nice things so you don’t refer to them as their name.

‘I did not feel even vaguely sorry for the rat – I hate them with a passion.

‘I would be absolutely delighted if the seagulls started sweeping up all of these longtails [rats]. I would be quite happy.

‘Rats are just horrible. It’s easy to feel sorry for a cute, fluffy duckling than a longtail. That’s all it comes down to.

‘But it’s just nature to some extent. We have to keep our poultry covered with nets to protect them.’