Morgan Freeman was seen heading to the set of his new film on Monday with his bodyguard and girlfriend in tow.

The actor looked downcast and tried to hide his face by looking to the ground as he got into a waiting SUV, with his bodyguard leading the way and opening up the car door for the Oscar winner.

He was dressed casually in a pair of jeans and a blue button-down with a colorful hat on his head and carried  tablet in his hand while his girlfriend had a book with her to read on set.

It was the first time Freeman has been seen since allegations of sexual harassment were reported by CNN.

Morose Morgan: Morgan Freeman was seen for the first time since multiple women accused the actor of harassment of inappropriate behavior in interviews with CNN (above) 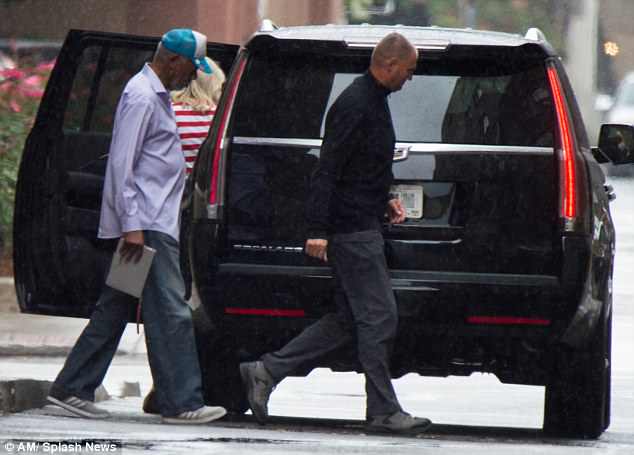 Low profile: The Oscar-winning actor, 80, kept his eyes fixed on the ground and was led to a waiting SUV with his girlfriend by a bodyguard

Here’s Johnny: He is in Savannah, Georgia filming The Poison Rose alongside John Travolta, but lost his longtime job with Visa in the wake of the scandal 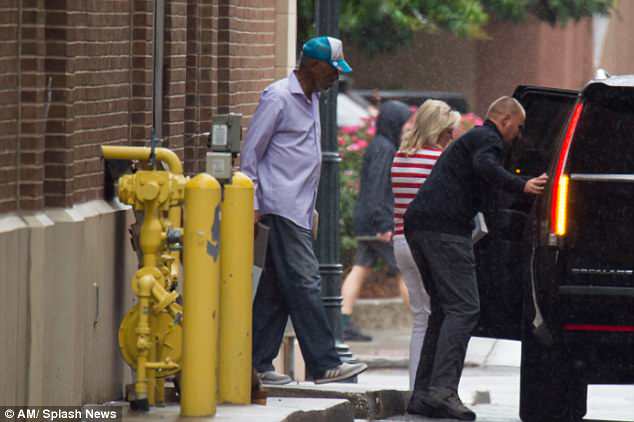 Explanation: ‘I admit that I am someone who feels a need to try to make women, and men, feel appreciated and at ease around me,’ said Freeman in a statement last week

Freeman is currently at work filming The Poison Rose alongside John Travolta in Savannah, Georgia.

He has managed to keep a low profile since the CNN story broke last week, but did release a statement responding to the allegations.

‘I admit that I am someone who feels a need to try to make women, and men, feel appreciated and at ease around me,’ said Freeman.

‘As a part of that, I would often try to joke with and compliment women, in what I thought was a light-hearted and humorous way. Clearly I was not always coming across the way I intended.’

The actor also stated that he did not assault any women, create an unsafe work environments or offer employment or advancement opportunities in exchange for sexual favors.

That does not contradict the CNN report, in which one woman alleged that the actor tried to lift her skirt on set but most spoke of comments that Freeman made which made them feel uncomfortable including the reporter who wrote the story, Chloe Melas.

She was six-months pregnant when she claims Freeman made a number of comments about her during an interview which she deemed inappropriate and told her supervisors about the following day.

Freeman also said in his statement: ‘I am devastated that 80 years of my life is at risk of being undermined, in the blink of an eye, by Thursday’s media reports.’

The accusations did not cause him to lose his role in The Poison Rose, but he was quickly dropped by Visa and as the voice of Vancouver’s public transportation system.

There has also been talk of the Screen Actor’s Guild possibly taking away his lifetime achievement award. 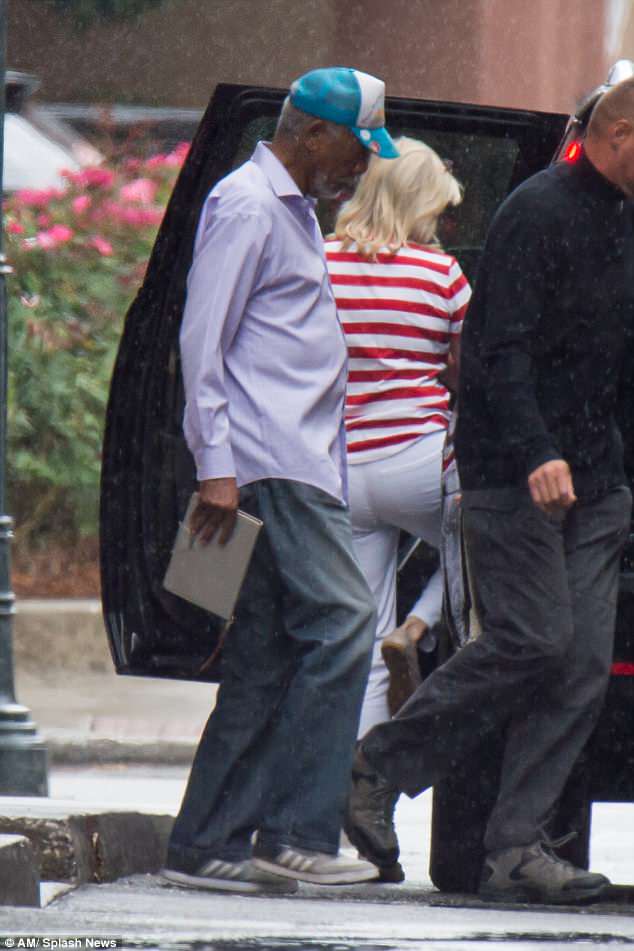 Quiet getaway: The actor stated that he did not assault any women, create an unsafe work environments or offer employment in exchange for sexual favors 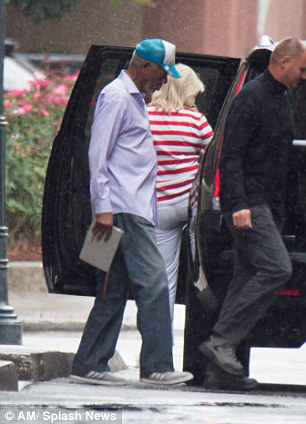 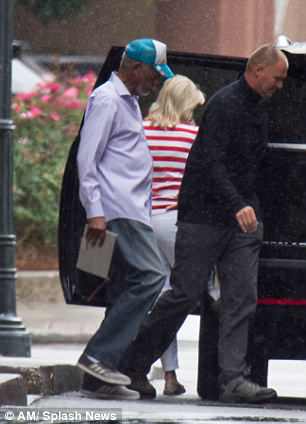 Lifetime: Freeman also said in his statement: ‘I am devastated that 80 years of my life is at risk of being undermined, in the blink of an eye, by Thursday’s media reports’ 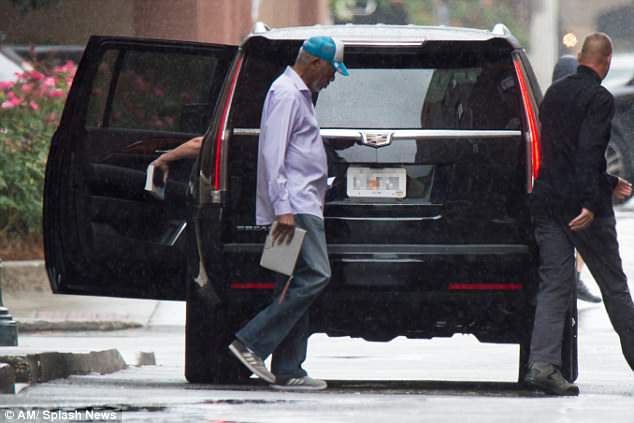 SAG back: There have been reports that the Screen Actor’s Guild might ask Freeman to retur his lifetime achievement honor 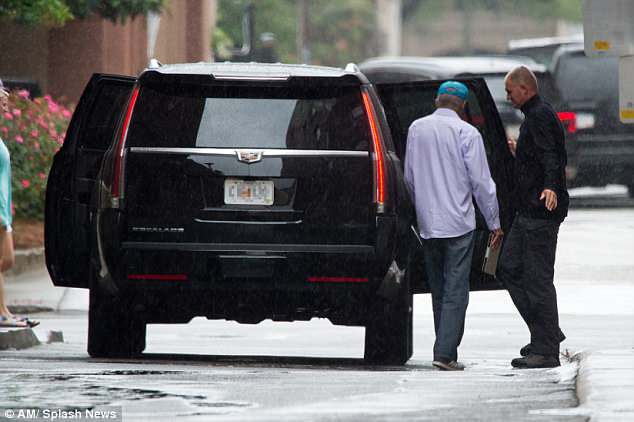 Away they go: Freeman has been busy filming The Poison Rose over the past few weeks

One person who will likely not be judging him however is his co-star Travolota, who was asked about the #MeToo Movement earlier this month in Cannes and said: ‘I don’t know much about it. I try to keep people equal. I’m a citizen of the globe. Division is a dangerous thing.’

Travolta has also been accused of sexual misconduct, but never charged and always denied those allegations.

Two men sued Travolta in 2012 filing sexual battery lawsuits in court. The men, known as John Doe 1 and John Doe 2, where represented by Gloria Allred in the case.

John Doe 1 claimed that Travolta groped him at the Beverly Hills Hotel in January 2012, the same month that John Doe 2 claimed the actor did the same at a hotel in Atlanta.

According to court documents in the case of John Doe 2; ‘Travolta suddenly turned on his stomach with his legs wide open with a full erection. He then tried to force Doe Plaintiff No. 2’s hand on Travolta’s scrotum.

‘Then, Travolta started to grab, rub and caress Doe Plaintiff no. 2’s upper thighs and buttocks.

‘We will be conferring with our client regarding what will happen next in this case.’ 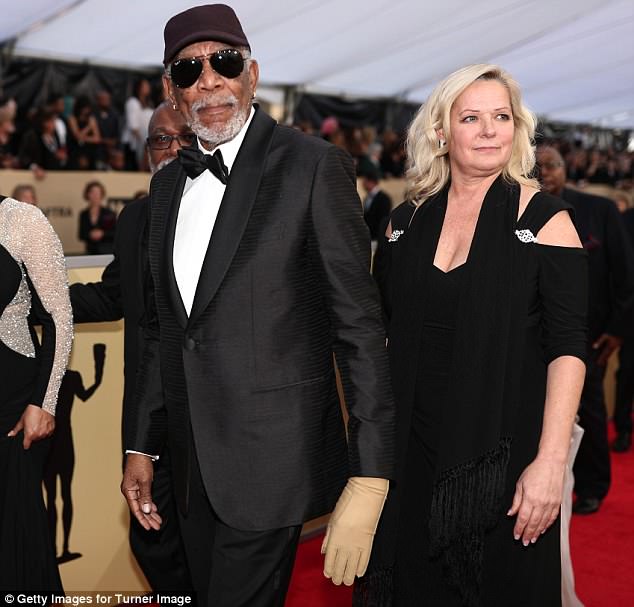 Big night: Freeman and his girlfriend at the Screen Actor Guild Awards in January 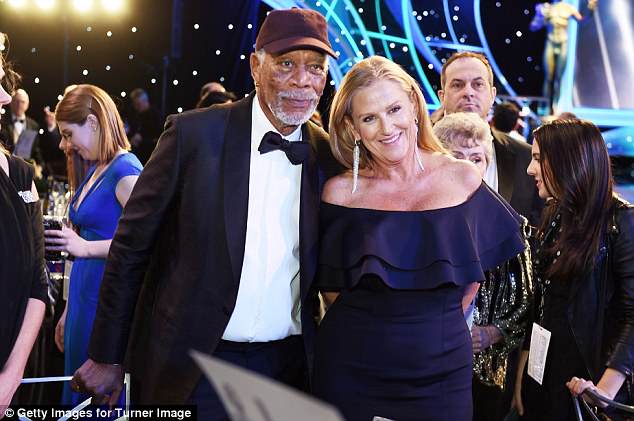 Partner: Freeman and his partner Lori McCreary, who is the president of the Screen Actors Guild

In an Employee Discipline Form, which was obtained by TMZ, it claims; ‘According to his own statement, Fabian proceeded to a guest stateroom to deliver a room service order as instructed by his supervisor.

‘When he stood up to leave the stateroom the guest asked him to give him a neck massage.

‘Fabian clearly stated that he did so shortly and then told the guest he needed to leave.’

But that was not the end of the encounter, with the papers later claiming; ‘According to Fabian, the guest then told him he was a beautiful person and invited him to return to visit him later that night.

‘Fabian explained that he couldn’t do so due to the strict company policy and despite the fact that the guest insisted, he left the room.’

Travolta’s lawyer Marty Singer said at the time; ‘The incident report now confirms Mr. Zanzi fabricated his story about my client. He never stated that my client did anything wrong.

‘Obviously, if he had engaged in any inappropriate conduct he would have reported it to his supervisors.’