Downing Street today appeared to wash its hands of a bid by Brexiteers to make Big Ben bong for Brexit.

Number 10 suggested Parliamentary decision-makers were standing in the way of the plan to formally mark the moment the UK leaves the EU on January 31 at 11pm.

Big Ben is currently undergoing a massive overhaul and Boris Johnson said it would cost £500,000 to get it working for the proposed set piece at the end of the month.

Earlier this week the Prime Minister backed plans for people to ‘bung a bob for a Big Ben bong’ as he suggested the public could pay for the bell to ring out.

But the House of Commons Commission has suggested it would not be possible to accept public donations, seemingly killing off any chances of the plan coming to fruition.

Today the Prime Minister’s official spokesman said the Commission had flagged ‘potential difficulties’ with the donations plan and that Number 10 is now ‘focused on the events we are planning’.

Boris Johnson, pictured in the Commons yesterday, had backed a campaign earlier this week for people to donate money to pay for Big Ben to bong on Brexit night 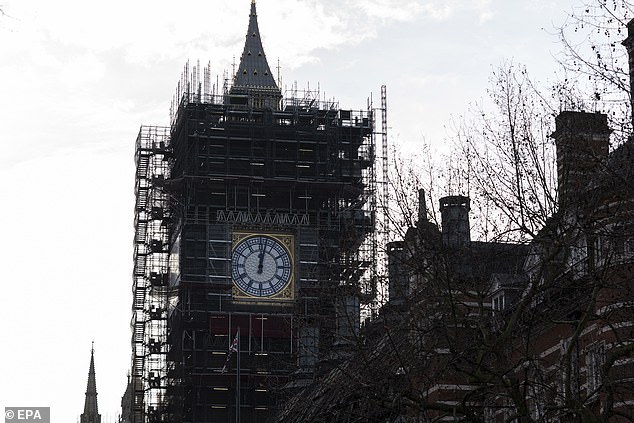 But the House of Commons Commission has suggested it could not accept public money to pay for the bongs. Downing Street today blamed Parliament for blocking the bid to mark the UK’s departure from the EU on January 31 at 11pm

The stand off between the government and Parliament means Brexiteer hopes of Big Ben bonging on Brexit day are now on life support.

It also means that even if the ‘bung a bob’ campaign hits the £500,000 target, it is likely to have all been for naught.

The PM’s official spokesman said: ‘The House of Commons authorities have set out that there may be potential difficulties in accepting money from public donations.

‘I think the PM’s focus is on the events which he and the government are planning to mark January 31.

‘It is a significant moment in our history and we want to make sure that it is properly recorded.’

Asked if Mr Johnson was disappointed by the Commission’s stance, the spokesman said: ‘It is a matter for the House authorities and a question for them.’

Pushed on whether the PM was no longer encouraging people to donate to the campaign, the spokesman added: ‘We are focused on the events we are planning.’

Number 10 is yet to set out what its plans to mark Brexit will actually entail.

It represents a humiliating U-turn for the Prime Minister who said during a BBC Breakfast interview on Tuesday: ‘The bongs cost £500,000… but we’re working up a plan so that people can bung a bob for a Big Ben bong.

‘We need to restore the clapper, in order to bong Big Ben on Brexit night, and that is expensive.’

The Commission said in a statement that accepting donations to make the bell ring on Brexit night would be an ‘unprecedented approach’ as it appeared to pour cold water on the idea.

It said: ‘There has been a suggestion that the cost of striking the Bell could be covered by donations made by the public.

‘This would be an unprecedented approach. The House of Commons has well established means of voting through the expenditure required to allow it to function, and to preserve its constitutional position in relation to government.

‘Any novel form of funding would need to be consistent with principles of propriety and proper oversight of public expenditure.’