At least 30 people have died after a tsunami crashed through an Indonesian coastal city demolishing houses and leaving families missing.

The National Disaster Mitigation Agency has warned that initial reports show ‘victims died in the rubble of a collapsed building’.

Photographs from the city of Palu, home to about 350,000 people on the coast of Sulawesi island, showed partially covered bodies on the ground near the shore.

Dramatic video footage filmed from the top floor of a parking ramp spiral in Palu and posted on Twitter, showed a churning wall of whitewater flatten a large mosque.

Houses have been swept away and people reported missing as the waves struck Palu and another city, Donggala – Indonesian disaster agency spokesman Sutopo Purwo Nugroho confirmed.

Palu which is home to around 350,000 showed partially covered bodies on the ground near the shore 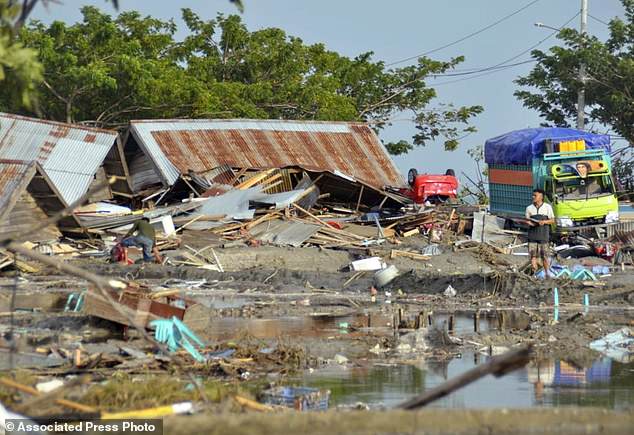 A man stands amid the damage caused by a tsunami in Palu, Central Sulawesi, Indonesia 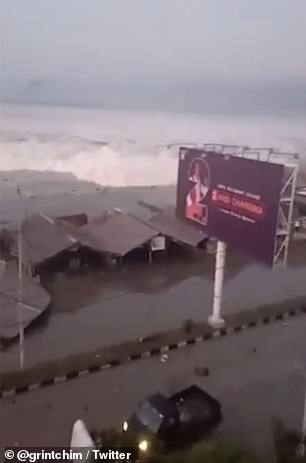 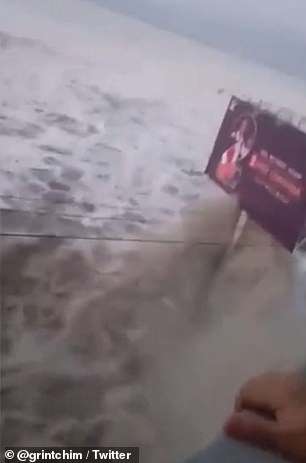 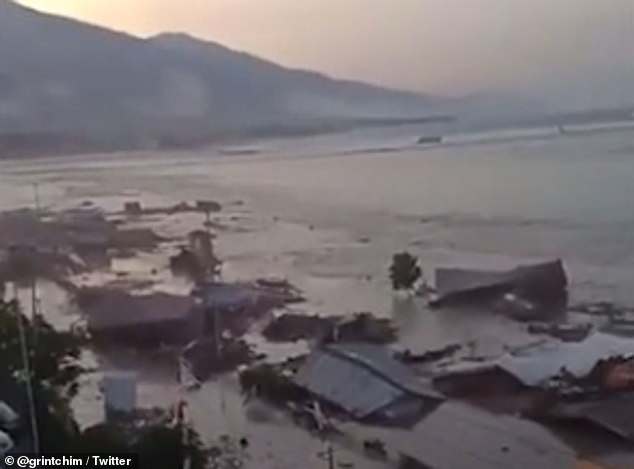 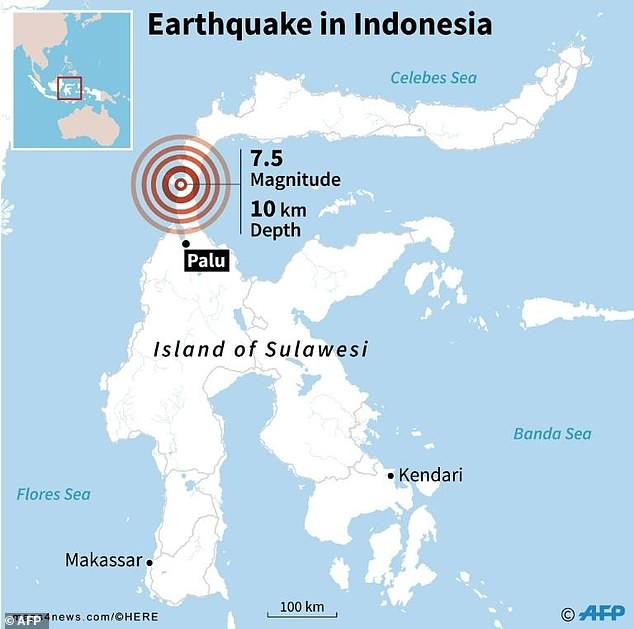 Sutopo said communications with the area in central Sulawesi are down and the search and rescue effort is being hampered by darkness.

The Indonesian government caused widespread confusion after issuing a tsunami alert on Friday afternoon, then quickly repealing at 5pm despite the tremors.

Three hours later at 8pm local time a spokesman for Indonesia’s geophysics agency confirmed that a tsunami had in fact occurred.

People in Central Sulawesi and West Sulawesi provinces were only then told to evacuate to higher ground.

It remains unclear as to whether people remained in their homes because of the contradicting government advice.

‘There are reports that many buildings collapsed in the earthquake,’ Nugroho said in a statement. 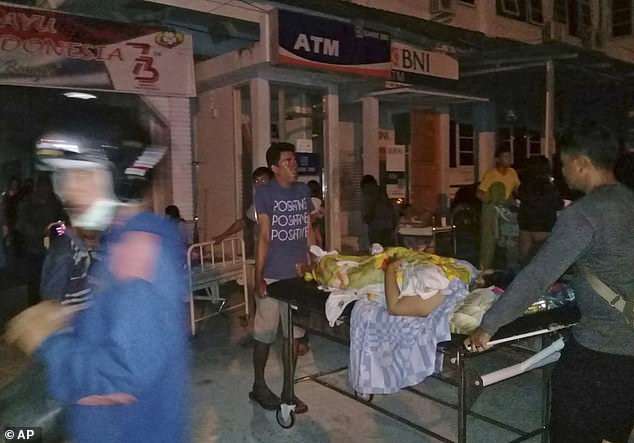 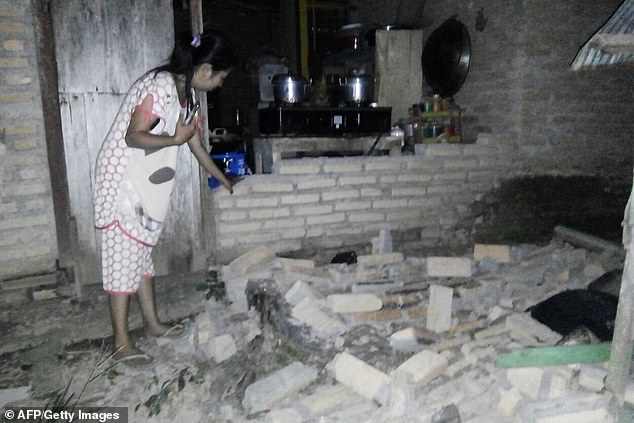 ‘Residents panicked and scattered out of their homes.’

Sulawesi is the fourth largest Indonesian island and is home to around 18million people – all of whom have been put on alert following the quake on Friday.

The U.S. Geological Survey put the magnitude of the second quake at a strong 7.5, after first saying it was 7.7.

An earlier 6.1 magnitude quake destroyed some houses, killing one person and injuring at least 10, authorities said.

A series of earthquakes in July and August killed nearly 500 people on the holiday island of Lombok, hundreds of kilometres southwest of Sulawesi.

Indonesia sits on the Pacific ‘Ring of Fire’ and is regularly hit by earthquakes.

In 2004, a big earthquake off the northern Indonesian island of Sumatra triggered a tsunami across the Indian Ocean, killing 226,000 people in 13 countries, including more than 120,000 in Indonesia. 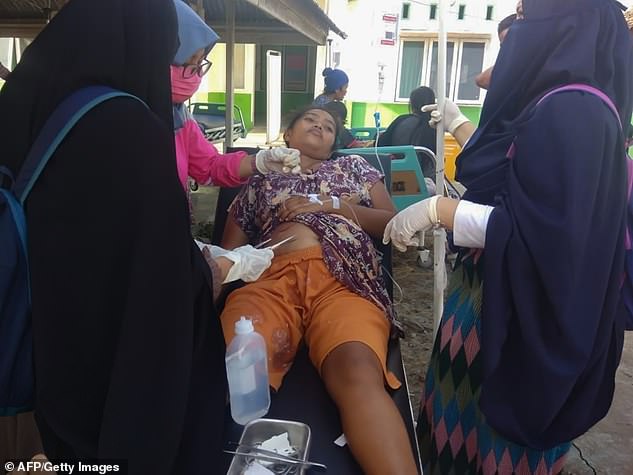 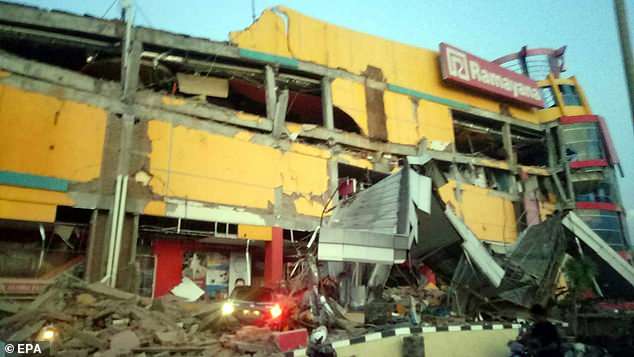 A collapsed shopping mall in the center of Palu city after a 7.5 magnitude earthquake struck on Friday evening 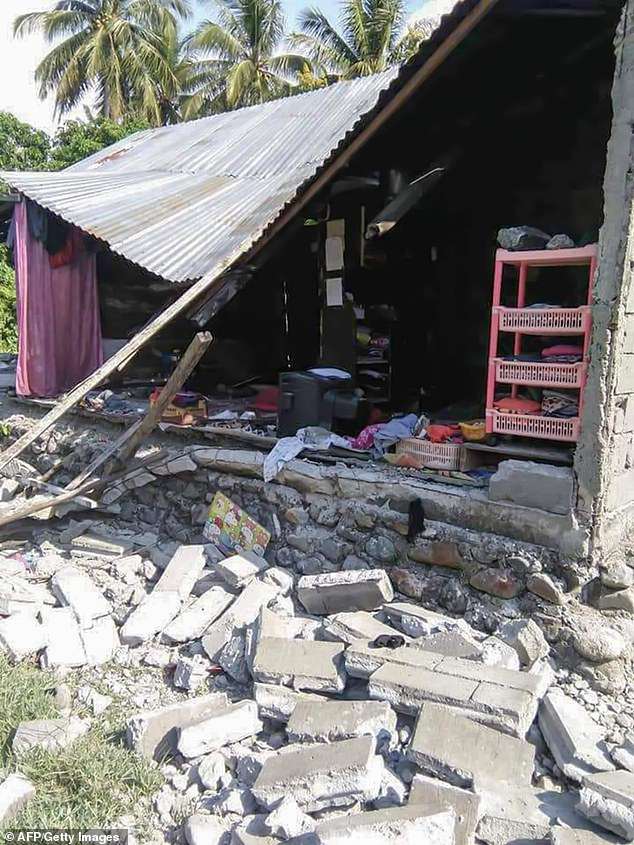 Several houses were said to have collapsed in the earlier quake, although it is not yet known what damage has been caused by the 7.5 magnitude tremor