More than 70 dying seal pups have been rescued from a farm in China after being caught by suspected animal traffickers to sell to aquariums.

The baby spotted seals, all less than two weeks old, were found starving and wailing on a poultry farm in the city of Dalian by police earlier this month.

Police claim the suspects had caught a total of 100 pups in the wild. Among them, 29 had died ‘from shock’ before the police arrived and nine more died after being rescued due to weak health, according to Xinhua News Agency. 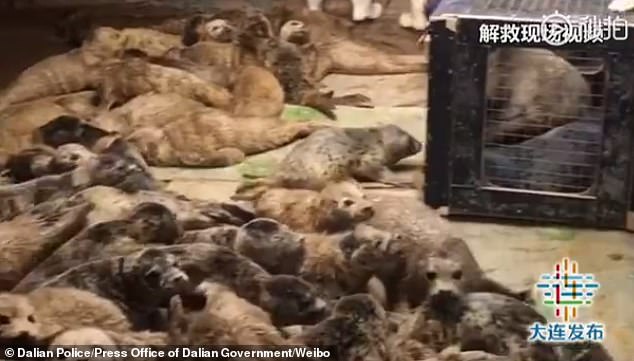 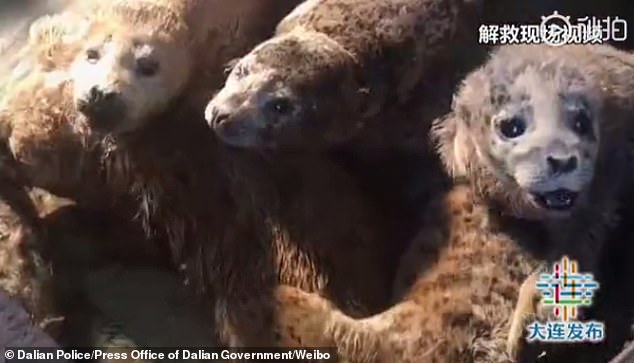 All of the tiny animals are less than two weeks old and are still sporting fur, according to police

Dalian police have arrested eight suspect and are searching for another four who are on the run. A manhunt has been launched with cash rewards.

Spotted seals live in the waters of the North Pacific Ocean and can be found along the north-eastern cost of China, particularly on the Liaodong Peninsula near the Yellow Sea. The species gets its name from its coat pattern.

They are a second-class protected animal species in the country – along with heavily trafficked pangolins and Asian black bears. Hunting, farming or trading of spotted seals without permission is prohibited by China’s Wildlife Protection Law.

Dalian police found the pups in the village of Hutou in Wafangdian on February 11. They made the discovery after receiving information from the locals.

Footage released by the police through the press office of the Dalian government on social media shows the tiny marine mammals, still sporting their fur, cramped into a small geese farm and crying for attention.

Officers found 71 live pups and nine dead pups in the building. On the next day, they found 20 more corpses buried under concrete nearby. 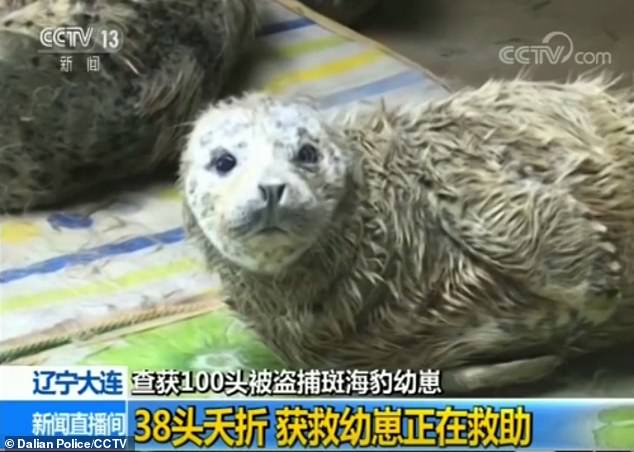 A total of 100 pups were said to be caught by suspected traffickers, among which 38 have died 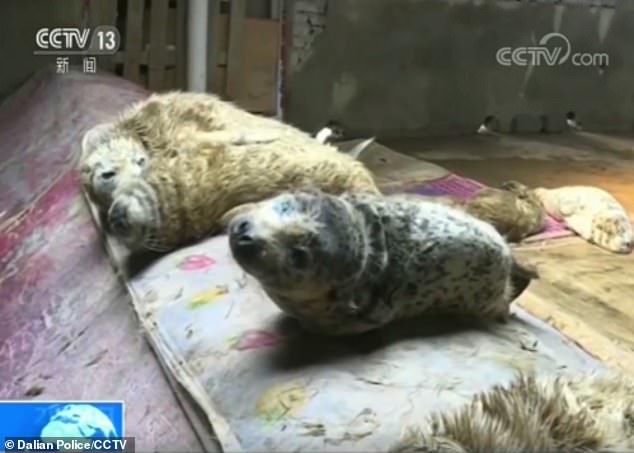 All of the pups were starving and their health was extremely weak, according to a local official.

Shi Xiaoming, the deputy director of Dalian Spotted Seal National Nature Reserve, told China Central Television Station that these pups should have been fed with their mother’s milk, but instead workers on the farm simply gave them large chunks of fish, which the pups would not be able to eat.

It is said that these pups account for more than half of the spotted seal pups born every year on the Liaodong Peninsula.

The surviving pups, 62 in total, have been put under the care of three government-approved organisations, including two ocean parks and an institute of marine and aquatic sciences. Vets and keepers are trying to nurse the animals back to health.

All of them are expected to be released back to nature between March and May after recovering from the ordeal, according to Dalian government officials in a press conference today. 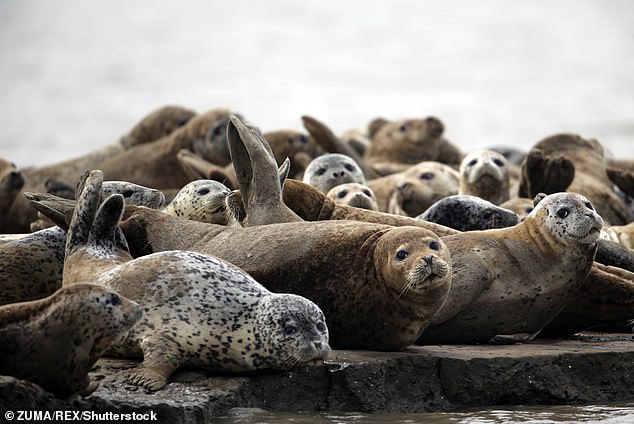 A total of 12 suspects have been identified by the police, among whom eight have been captured.

The police today launched a manhunt to find the four remaining suspects who are on the run.

The fugitives, all locals, are between 40 and 45 years old, according to a police reward notice.

Locals told Xinhua that all suspects were fishermen in Wafangdian.

Anyone who can provide useful information leading to the capture of any of the four men would be given a 50,000 yuan (£5,720) cash reward.

Animal rights activists have urged the Chinese authorities to punish the suspected traffickers.

In a statement issued to MailOnline, Dr. Li said the footage ‘reveals the depths that some will go to exploit animals for human entertainment’.

He added: ‘For these seal pups to have been cruelly ripped away from their mothers and their natural environment, and crammed into this disgusting pen to await their fate, is really contemptible and we urge the Chinese authorities to take action against the perpetrators.’ 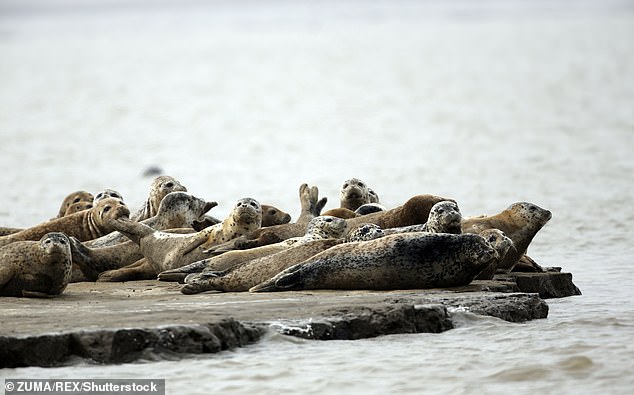 Spotted seals can be found along the north-eastern cost of China, particularly on the Liaodong Peninsula. Pictured, a few spotted seals rest on a rock at the Liaodong Bay in Jinzhou, Liaoning

Despite legal protection, spotted seals are one of the most hunted wild animals in China, especially by fishermen in the Bohai Bay where female seals go every winter and spring to give birth and raise their offspring.

Adult male spotted seals were once the most prized catch for their genitalia as some Chinese people believe consuming a male seal’s sexual organs could help improve men’s performance in bed.

The animals’  waterproof skin and thick soft fur are also highly sought after.

Seal pups have reportedly become more and more in demand among illegal traders in recent years because of their popularity among aquariums.

A previous Shanghai Daily report said the number of spotted seals in north-eastern China and the neighbouring Korean Peninsula had dwindled from millions to just hundreds by 2010 as a result of hunting.