Model Annalise Braakensiek was a Bondi icon, known by Australians from all walks of life – and a moving sunrise tribute to the former TV presenter, held on the Sydney beach on Wednesday morning, was living proof.

Women in long, bohemian dresses, men in full suits and children in wetsuits were just some of those who descended on the sand to pay their final respects to Braakensiek after she took her own life on January 6.

Mourners, who included model Jodhi Meares, gathered silently at the southern end of the beach just before 6am, leaving their shoes along the wall and sitting down across the rocks.

Most carried a single frangipani, Braakensiek’s favourite flower, and two large wreaths had been laid out nearby.

Hundreds of mourners gathered on Bondi Beach on Wednesday morning to pay tribute to model Annalise Braakensiek (pictured is her ex-husband, Danny Goldberg) 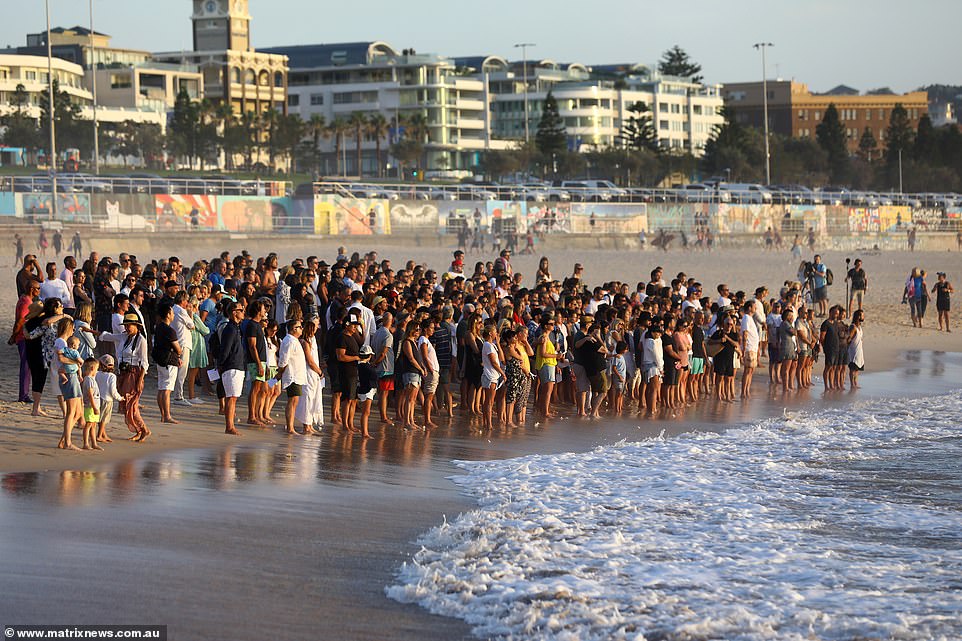 The lingerie designer’s former husband, stockbroker Danny Goldberg, was front and centre on the beach, as was her family 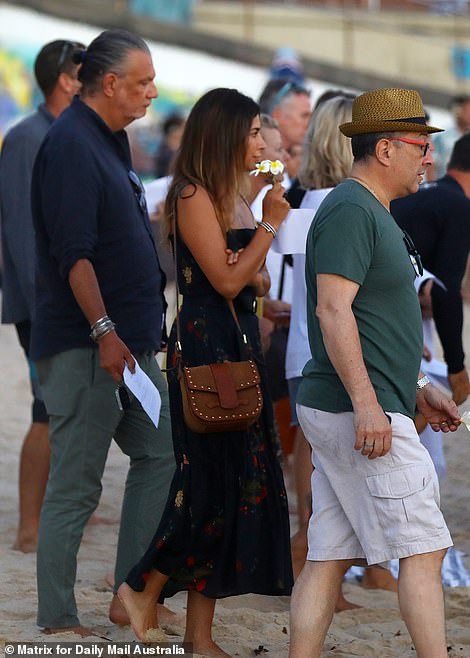 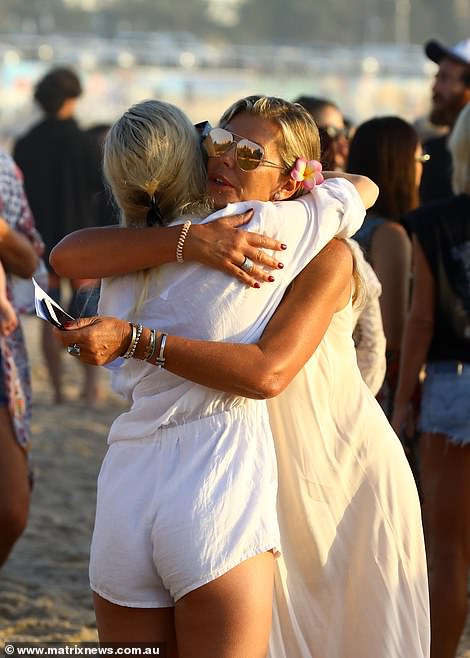 People from all walks of life were seen grieving on the sand, as they engaged in silent meditation before heading into the surf (pictured left is model Jodhi Meares, right is friend Gina Byrnes) 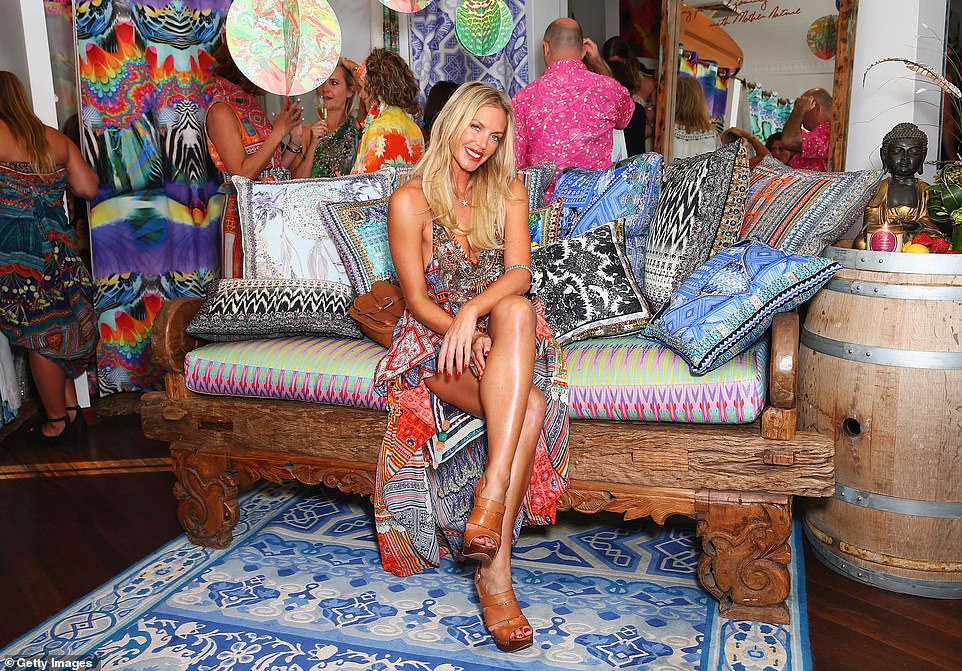 The former model, who had launched successful jewellery and lingerie lines, had been an ambassador for R U OK? and had spoken often in interviews and on social media about her struggles with mental health. She took her own life on January 6 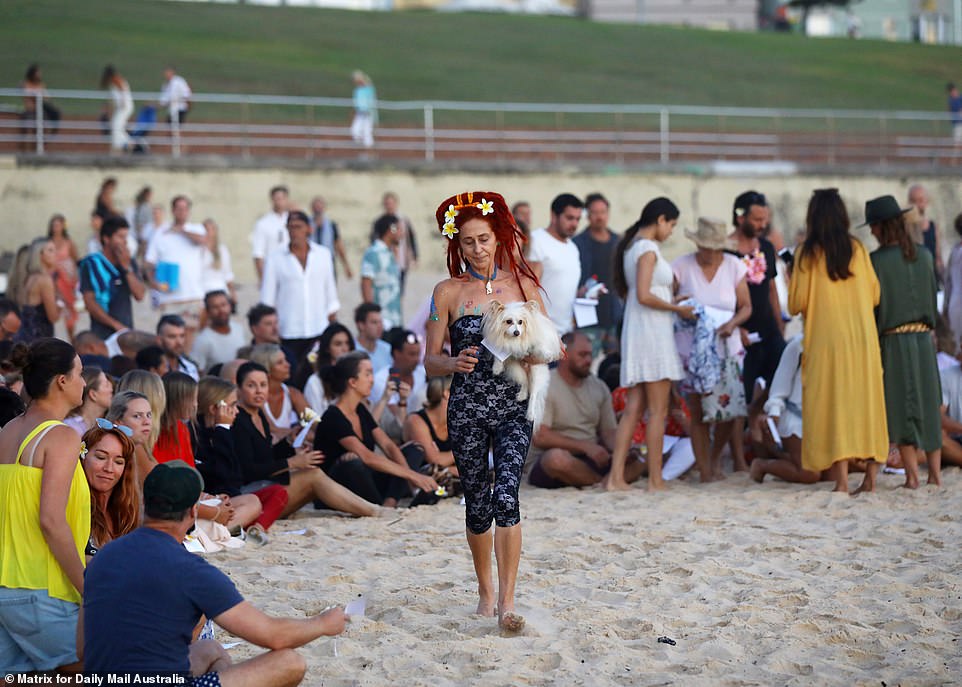 One woman brought her dog, while others were seen on the beach with their young children 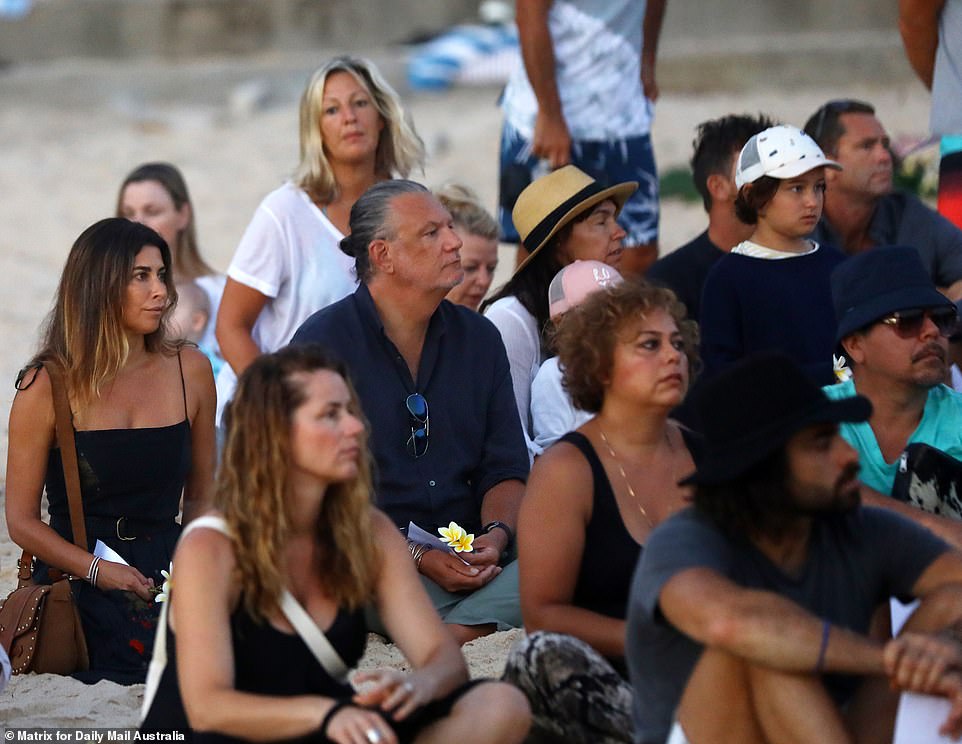 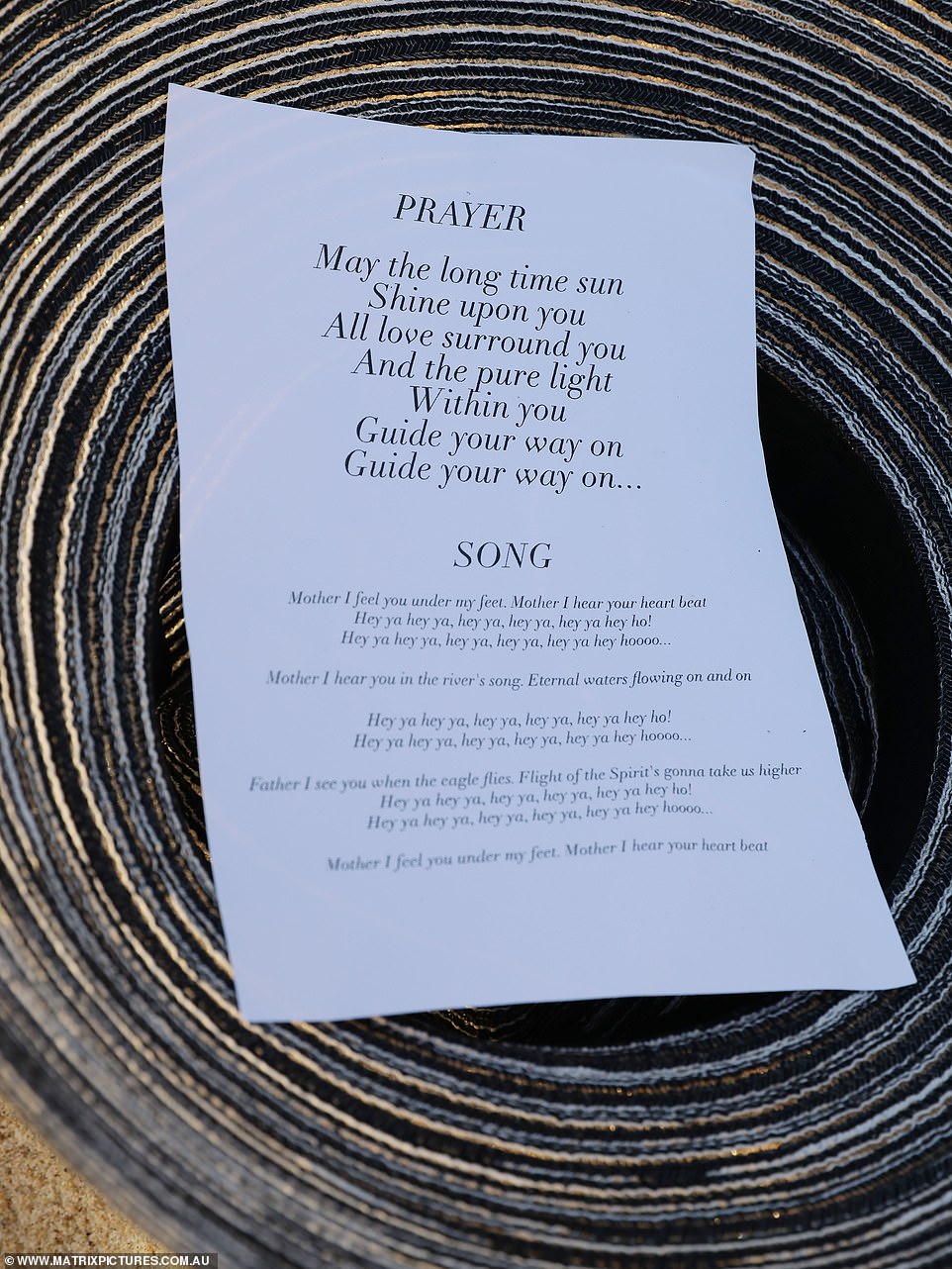 Danny Goldberg, the designer’s former husband, arrived with one flower behind his ear and a bunch tied around a string and worn as a necklace.

As the large group moved from the rocks to the sand, he was embraced by friends and family as he took his seat on the sand, positioned front and centre.

After a lengthy meditation, ended with music played on a wooden recorder and a prayer, the crowd moved towards the water to lay their single frangipanis.

Friends held each other for support as they stared out at the sun rising over the waves and remembered their friend in silence.

Dozens of mourners returned to the sand to change into swimming gear and grab their surfboards before paddling out beyond the break to gather in a circle and talk more about Braakensiek.

Mr Goldberg was taken into the deep water by a lifeguard on a jet ski while holding a wreath of frangipanis.

As the surfers took a moment to remember their friend, another large crowd stayed closely gathered on the shore, watching on. 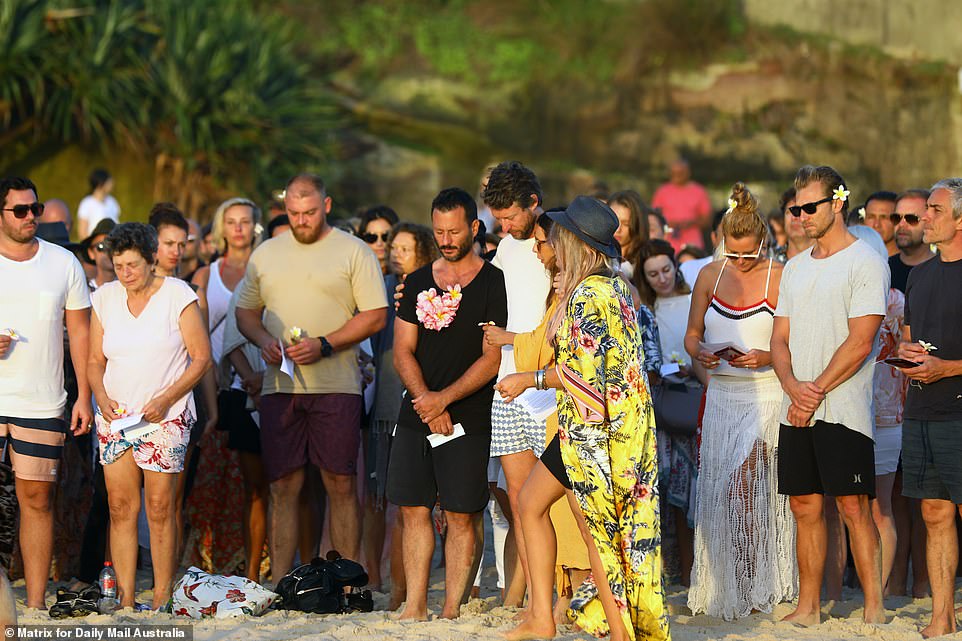 Mr Goldberg was comforted by friends as he took part in a prayer for his estranged wife. The Bondi man had been married to Braakensiek for 16 years before they split in April 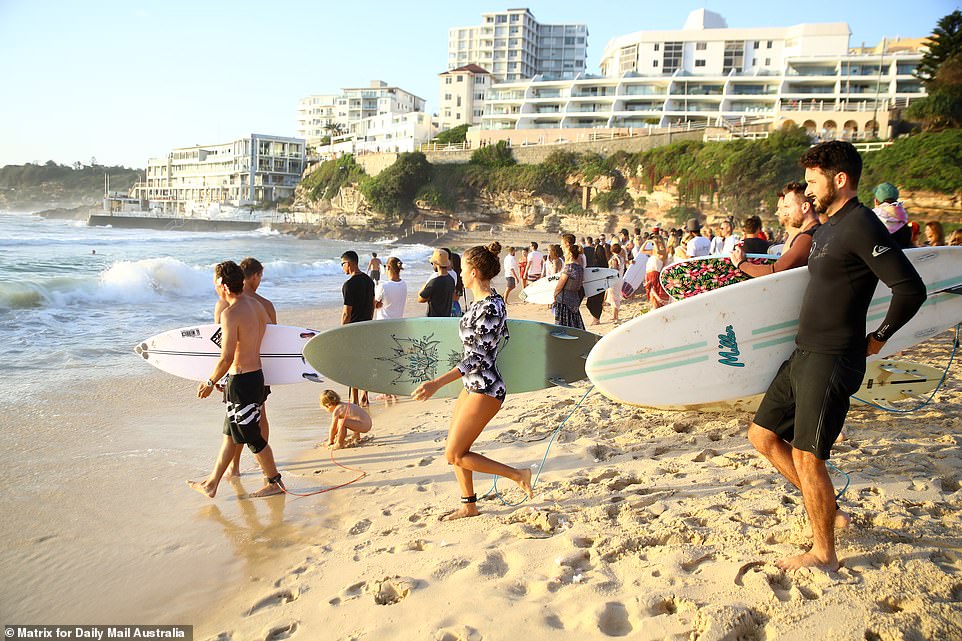 While dozens made their way into the water, more stayed on the sand and watched the group gather in a circle 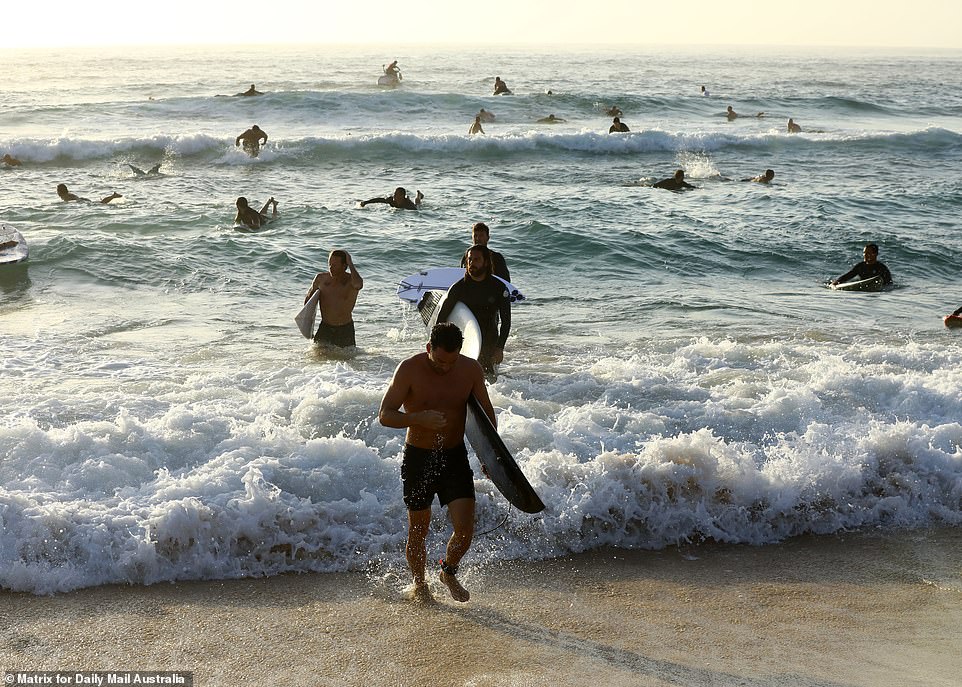 The surfers remained in the circle for some time, in quiet reflection, before returning to shore (pictured) 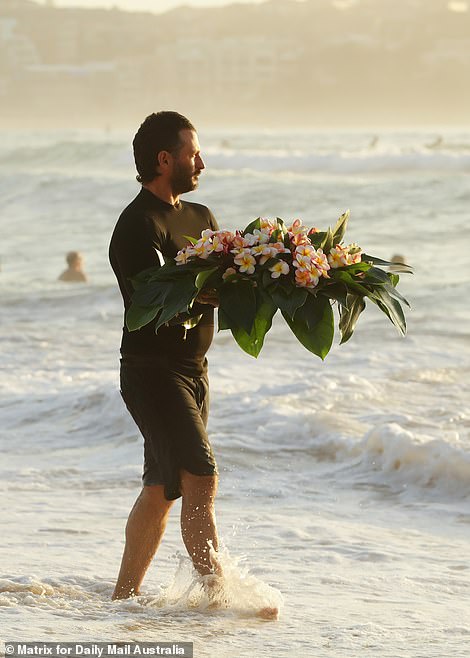 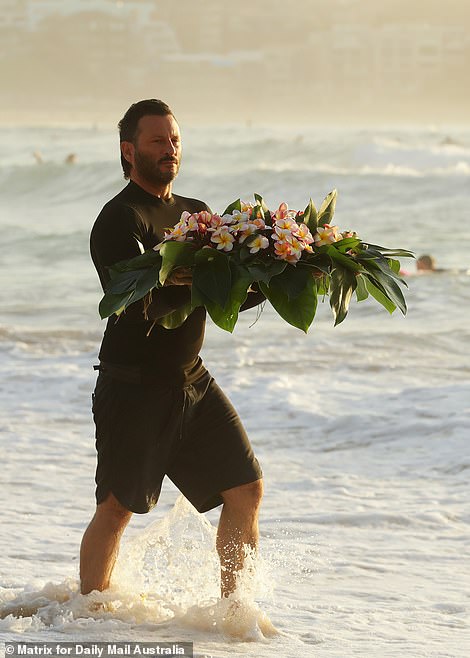 Mr Goldberg was seen carrying a large frangipani wreath into the water, before he was picked up by a jetski and taken to the circle 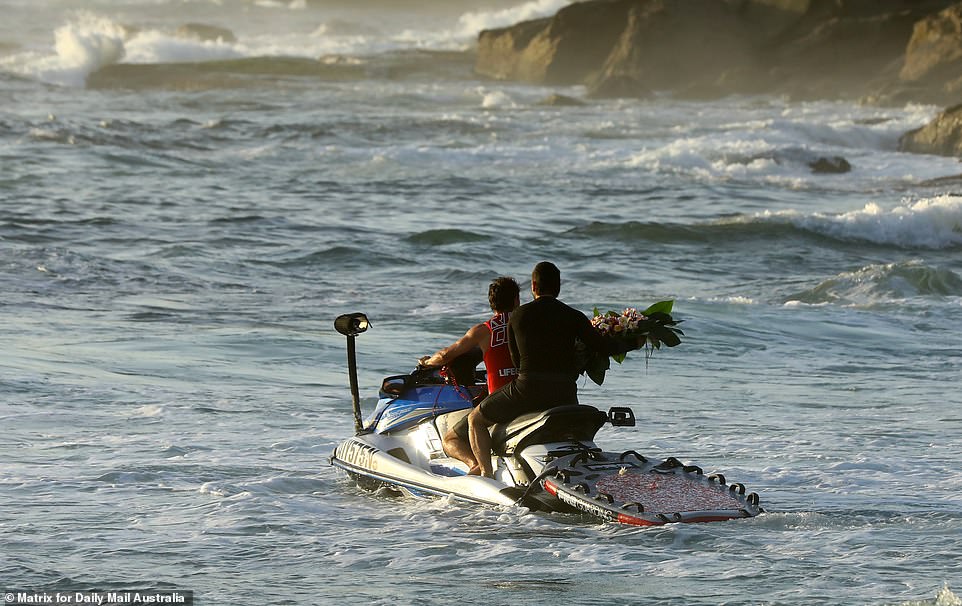 The large crowd then all gathered to sing, and were encouraged by a live band to: ‘sing for her’.

Afterwards, mourners convened to The Bucket List for ‘hot lemon water, a coffee, and a natter’, said to be a tradition between Braakensiek and one of her best friends, meditation guru Gina Byrnes.

Ms Byrnes, a mother-of-two, shared a loving tribute to Braakensiek on Instagram last week, telling followers how she: ‘had an ability to smile with her whole body’.

‘You were a work of art and yes not everyone understood you but those who did will never forget you,’ she wrote.

‘You stayed committed to being adventurous, joyful, authentic, creative, genuine, inclusive, compassionate, forgiving and open minded. You loved passionately, fiercely and without conditions. Your body oil fragrance is still lingering in your now very empty room.

We laughed and cried together sharing each others pain and happiness. Baby I know you felt so abandoned and misunderstood by some people but you were loved globally sweetheart, your presence and unselfish creative soul touched so many peoples hearts.

‘Thank you for opening up your beautiful generous heart sharing your inner secrets with me, what an honour… you made my soul shine and feel alive, my spiritual goddess.’ 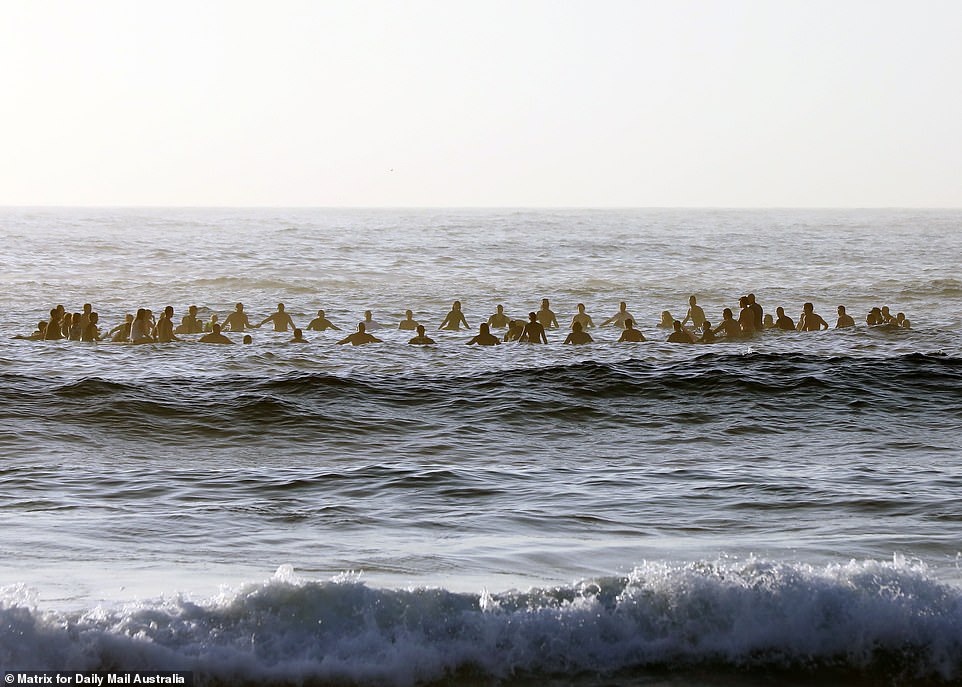 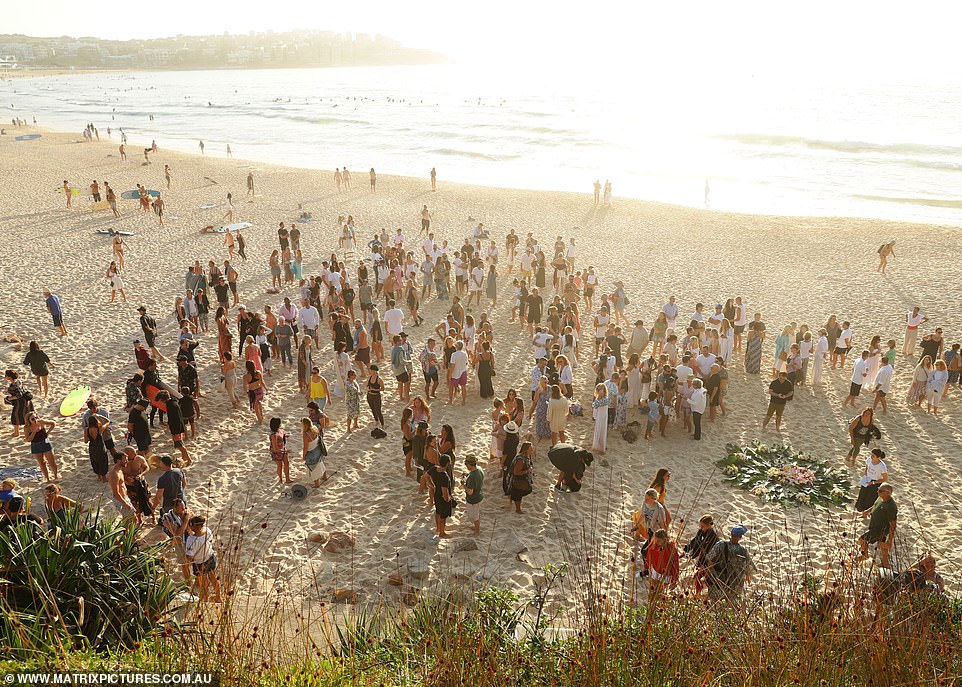 As the surfers got ready to paddle out, those in attendance used the time to comfort each other and catch up 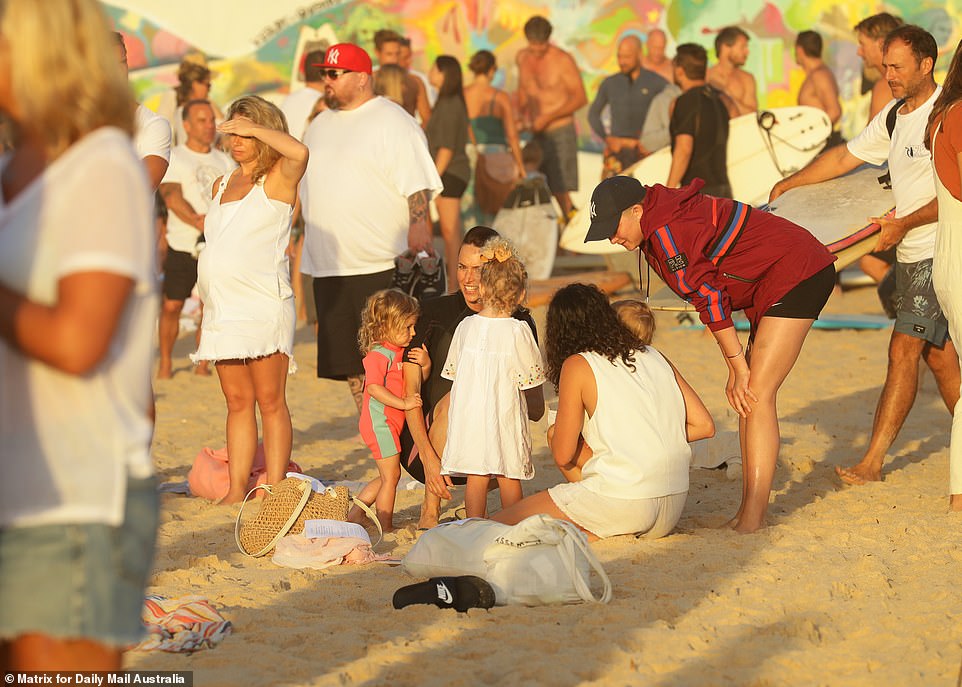 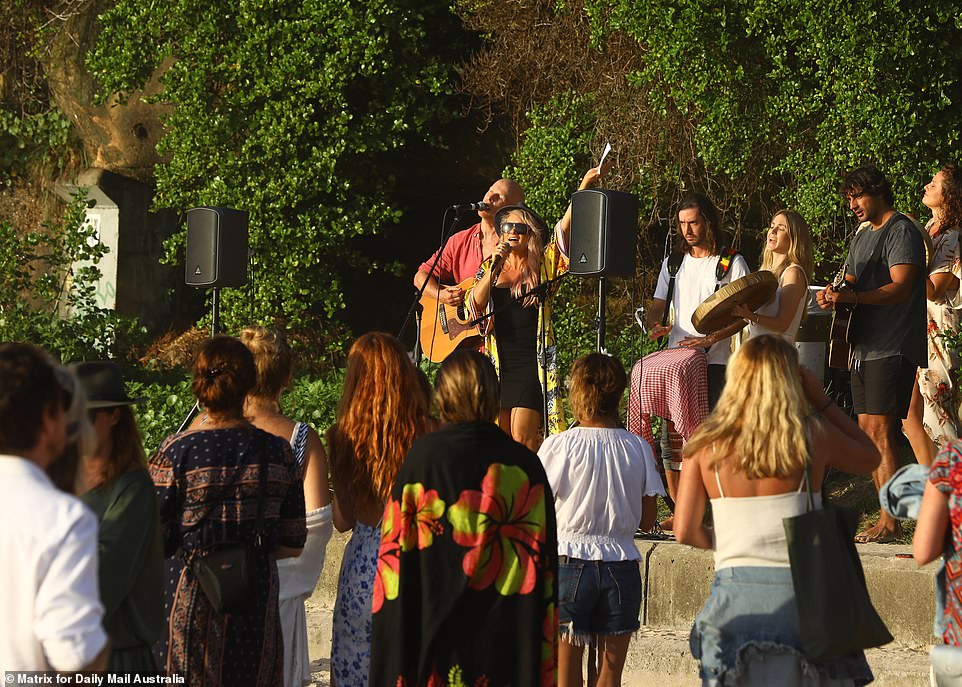 A live band performed a call and response song, with the singer encouraging mourners to ‘sing for her [Braakensiek]’

Braakensiek was found dead in her brand new Potts Point apartment on January 6 by friends who had become concerned after not hearing from her for a few days.

The former model, who had launched successful jewellery and lingerie lines, had been an ambassador for R U OK? and had spoken often in interviews and on social media about her struggles with mental health.

In the months before she took her life, Braakensiek had posted a series of cryptic social media posts, including one in which she paid tribute to those who had supported her during a ‘challenging year’.

‘The rest you know who you are. I love you. Beyond. Including my bestie in heaven. A day doesn’t go by when I don’t think about you,’ she posted.

Ms Braakensiek split with her stockbroker husband Danny Goldberg in April last year after 16 years together.

She bought the apartment in Potts Point where her body was found after the break up. 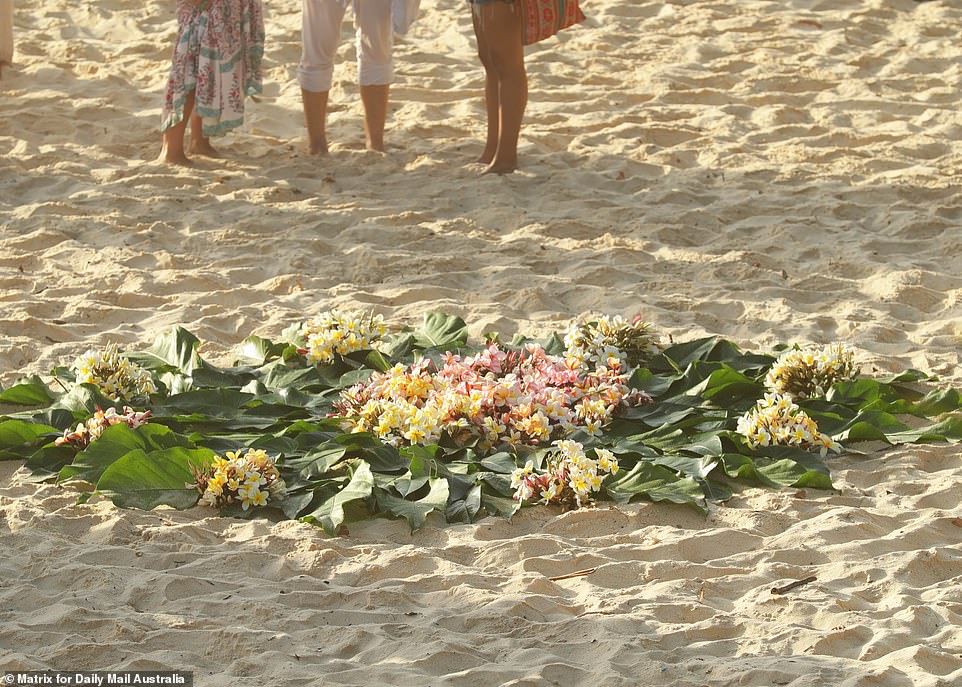 Frangipanis played a vital role in the service, as they were Braakensiek’s favourite. Guests were encouraged to each lay a single flower in the ocean 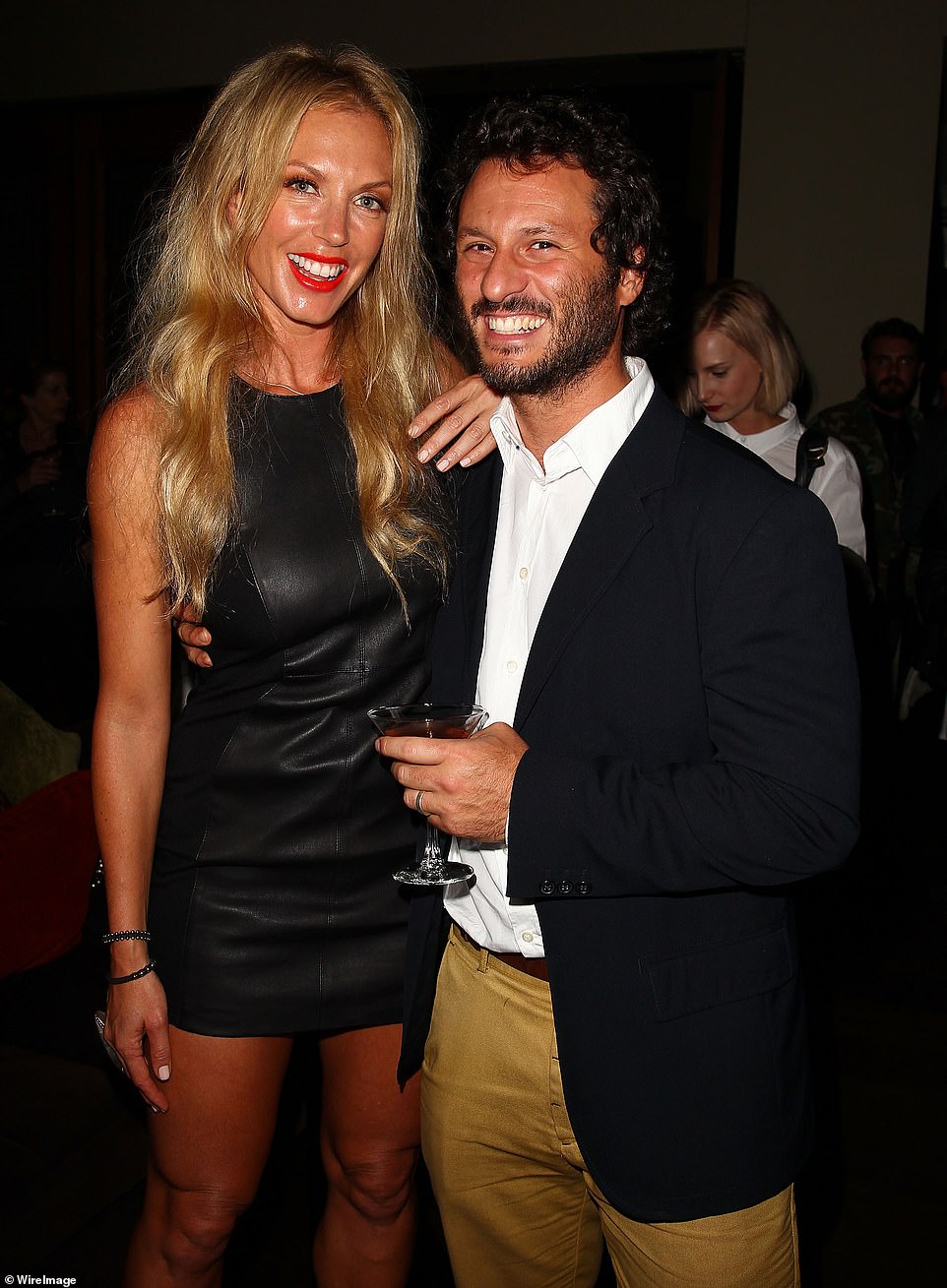 In one of the last posts to her 40,000 followers on December 15, she wrote: ‘Everything seems to feel twisted and upside down at the moment’.

‘Thank you from the bottom of my heart to all of you who have helped me though my dark clouds,’ she wrote in another Instagram post about her mental health struggles.

In a later-deleted Instagram post, she wrote: ‘I don’t know if a broken heart mends or learns to live in pieces’.

She also wrote that she was ‘hanging in there by the hair on my chinny chin chin’.

While Braakensiek was left devastated by the breakdown of her marriage, friends say she was also grieving for a man she had lost more than a decade before. 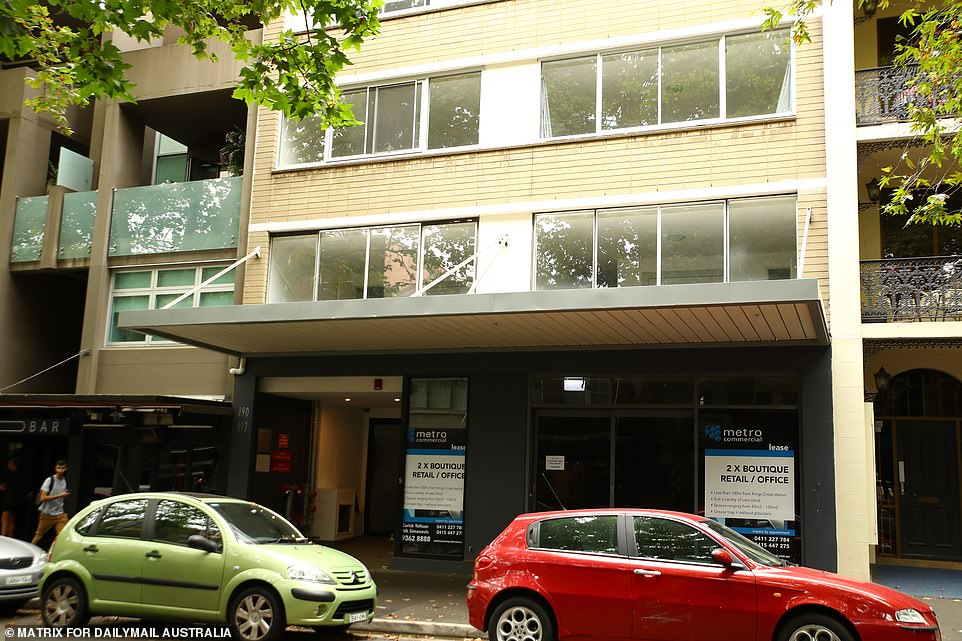