More than 25 oil tankers are currently floating off the Southern California coastline as the demand for oil plummets.

The U.S. Coast Guard filmed video that shows 27 tankers anchored in waters just off the coast by the Port of Los Angeles and Long Beach as of Thursday afternoon.

Stay-at-home orders across the country have led to a dramatic reduction in the demand for crude oil and now the tankers have no place to deliver the product and instead have become floating storage tanks.

A couple walks on the beach as two oil tankers sit off the coast in Long Beach, California on Wednesday 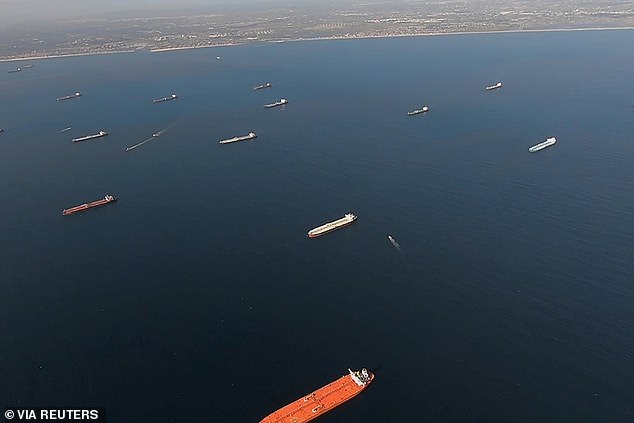 Some of the 27 oil tankers anchored off shore during the outbreak of the coronavirus disease (COVID-19) are viewed from a U.S. Coast Guard helicopter near Long Beach 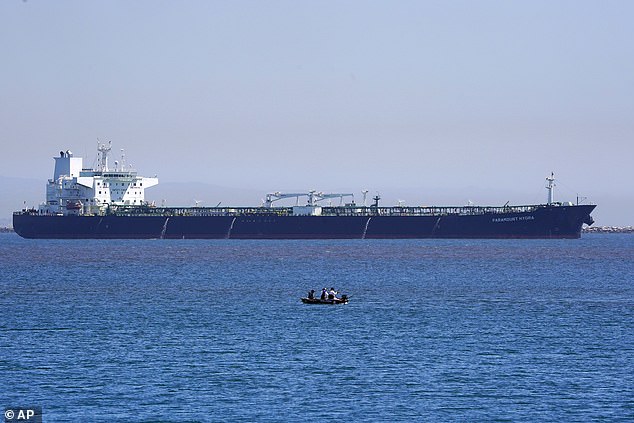 The oil tanker Paramount Hydra sits off the coast as people fish in the foreground. About three dozen tankers are parked between Long Beach and the San Francisco Bay Area

‘The supply chain is being backed up, and tankers are now being used to store product that would have originally gone out to the supply chain,’ Scott Lauermann from the a spokesman for the American Petroleum Institute told the LA Times.

Oil prices began to fall this week and pushed the prices into negative territory for the first time ever.

Prices were supported by producers such as Kuwait saying they would move to cut output.

Stay-home orders around the world mean most cities are locked down with air travel greatly reduced and millions working from home. 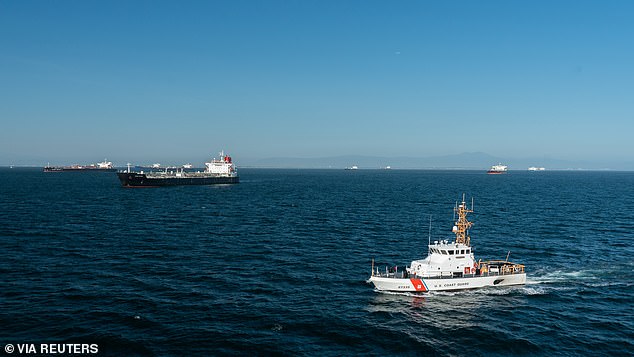 U.S. Coast Guard Cutter Narwhal patrols near some of the 27 oil tankers anchored off shore during the outbreak of the coronavirus disease 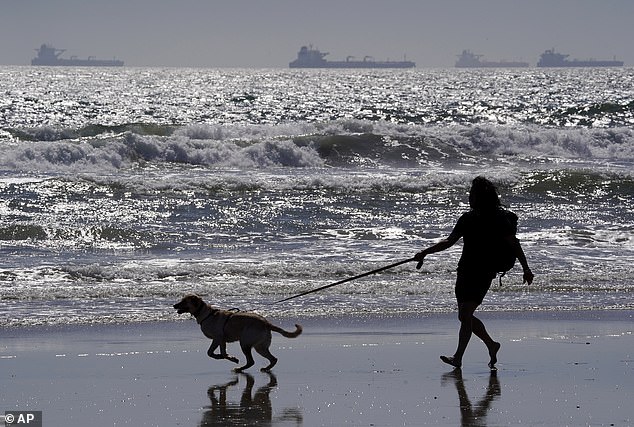 A man walks a dog as oil tankers sit offshore n Huntington Beach, with nowhere to go due to lack of demand and nowhere to store the oil 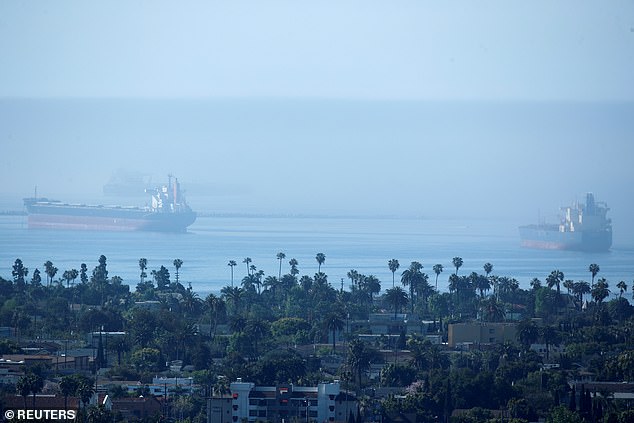 An oil tanker and a container ship sit off shore of the port of the Long Beach during the outbreak of the coronavirus disease in Long Beach, California

However, oil rigs and refineries are still at work. Oil is still be extracted from the ground and it all has to go somewhere.

‘Due to the unique nature of this situation, the Coast Guard is constantly evaluating and adapting our procedures to ensure the safety of the vessels at anchor and the protection of the surrounding environment,’ said Cmdr. Marshall Newberry, from Coast Guard Sector Los Angeles/Long Beach to NBC Los Angeles.

‘Coast Guard watchstanders, in partnership with the Marine Exchange of Southern California, are closely monitoring each anchorage to manage the increased number of tank vessels we’re seeing off the California coast.’ 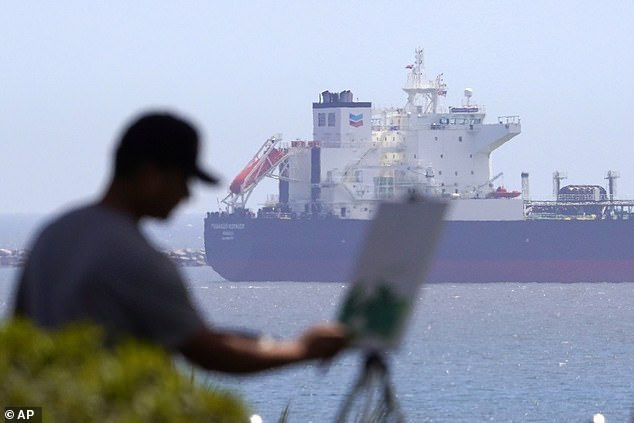 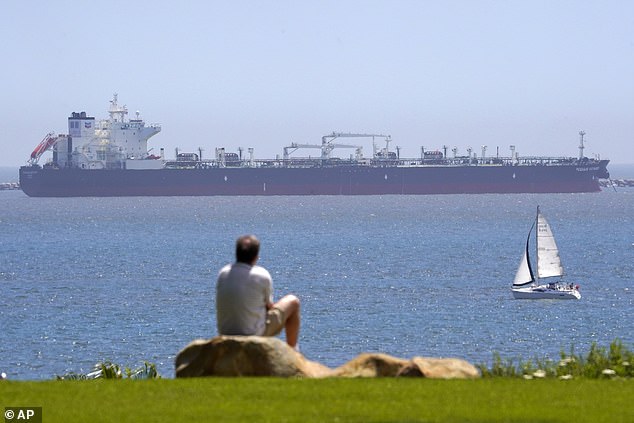 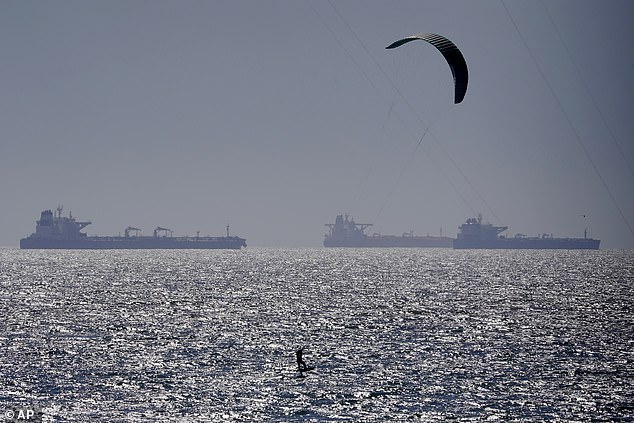 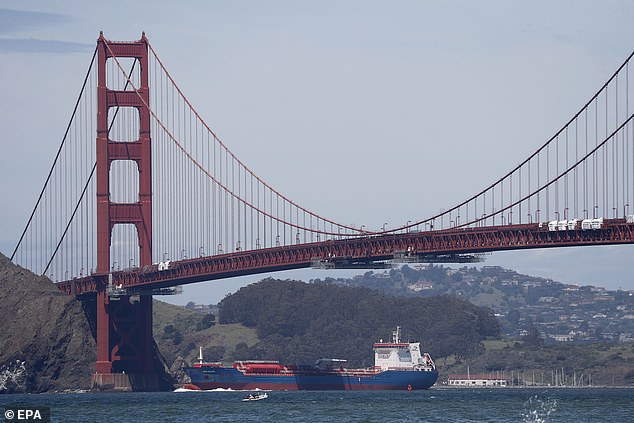 The Med Pacific, an oil and chemical tanker, makes its way under the Golden Gate Bridge in San Francisco, California