Hummus, garlic bread and pesto are under threat from strict new calorie limits, the food industry has warned.

Dozens of other products popular with middle-class shoppers including hollandaise sauce, sweet potato chips and guacamole also face being changed beyond recognition.

There is a growing backlash in the industry against the calorie guidelines, first announced by the Government’s health agency last spring.

They are among a raft of measures to tackle obesity and call for the calories of 15 categories of food to be cut by 20 per cent over five years.

The only way for some foods to meet the calorie guidelines is to remove a crucial ingredient. Products under threat include hummus, top left, and olive and basil focaccia, top right

But manufacturers and retailers say the guidelines are ‘unworkable’ and the wrong response to the nation’s obesity crisis.

They have accused Public Health England (PHE) of basing the targets on an oversimplified mathematical model which does not work in practice.

For some products, the only way to reduce the calorie content to comply with the guidelines is to remove a crucial ingredient.

They include the ‘bread with additions’ category, which has a proposed limit of 254 calories per 100 grams.

Garlic bread typically contains 374 calories per 100g and the same portion of an olive and basil focaccia loaf has 300 calories.

Only if the garlic butter was removed from the garlic bread or the olives from the focaccia would the calories be sufficiently reduced, manufacturers claim. 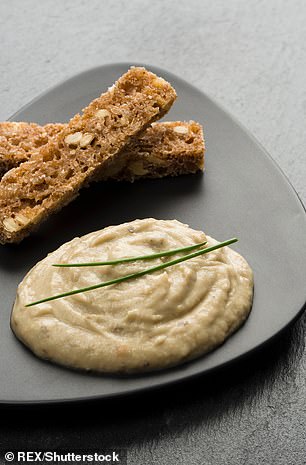 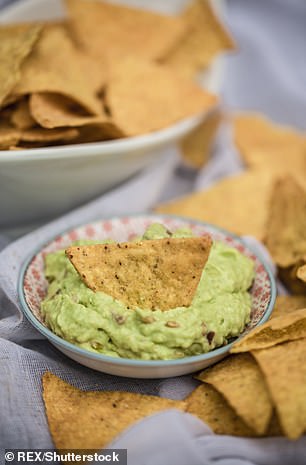 There are similar problems for hummus and guacamole, which are classed as ‘meal accompaniments’, with a 193 calories per 100g limit.

Hummus typically has about 278 calories per 100g and even a reduced calorie version is 219 calories. Guacamole is about 228 calories.

Manufacturers say the calorie content of these products cannot easily be reduced without radically altering their taste and consistency.

Other items that fall outside the limits include microwavable rice and quinoa pouches, which would need to be stripped of their flavourings to comply.

Grissini breadsticks, polenta chips and korma curry sauce are also above the guidelines and would be very difficult to alter. 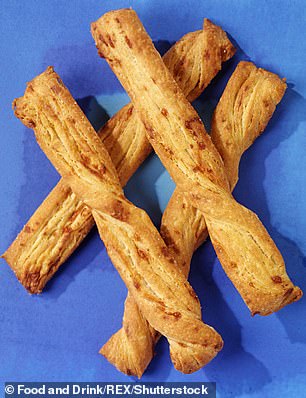 Manufacturers say the calorie content of some products, such as Grissini breadsticks, pictured, cannot easily be reduced without altering their taste (file picture)

The guidelines are not compulsory but the Government has threatened to use ‘other levers’ against the food industry – such as a sugar tax on confectionery – if it is deemed not to be taking sufficient action against obesity.

Two thirds of adults and one third of children in the UK are either overweight or obese. Britain’s rates are the third worst in Europe.

Further details emerged over Christmas when draft calorie limits were drawn up for each of the 15 categories of foods and circulated within the industry.

PHE is expected to publish final guidelines this spring and the food industry will be expected to have met them by 2024.

Tim Rycroft, of the Food and Drink Federation, which represents manufacturers, said: ‘FDF and its members welcomed the calorie reduction programme when it launched. But we have reservations about how achievable the targets are in reality.

‘A collective 20 per cent calorie reduction guideline across all food categories is unfeasible, particularly given the range of food types that this blanket guideline covers. We hope industry’s concerns will be considered.’

Andrew Opie, director of food and sustainability at the British Retail Consortium, the trade body for retailers, said: ‘While we support the Government’s aim of reducing calorie consumption, some of the calorie targets are simply not realistic.

‘Our members continue to reformulate products by removing sugars, fats and salts. However, they must also take account of the tastes and preferences of their consumers.’

Coffee shops and restaurants will also have to comply with the limits. Kate Nicholls, chief executive of UK Hospitality, which represents them, said: ‘We are wary that the targets are unworkable.’

Dr Alison Tedstone, chief nutritionist at PHE, said: ‘Consuming too many calories is the root cause of obesity. The Government has a clear ambition to halve the number of children becoming overweight and obese by 2030 and prevent them becoming obese adults.

‘The food industry has a responsibility to act where it can make products healthier. Our draft proposals set out how the food industry can help tackle excess calories. We encourage industry feedback to help shape this work.’