By Walter Finch For Mailonline and Afp

At least 35 teenage girls have been rescued from a ‘baby factory’ hotel where they were used as sex slaves and their babies sold on the black market, Nigerian police say.

The teenagers were rescued from the Gally Gally hotel on Monday in the southeastern state of Anambra, where they were used ‘for sex slaves, prostitution and baby factory,’ state police spokesman Tochukwu Ikenga said late Wednesday.

Nigerian police have previously freed dozens of under-aged women and babies from illegal maternity homes known as ‘baby factories’ where women are forced to have children for sale on the black market.

Four of the girls were pregnant, he said, while some weapons and cash were recovered from the hotel.

Ikenga said investigations were ongoing while the girls would be handed over to the government agencies for rehabilitation.

He said the owner of the hotel was on the run, while three suspects had been arrested, accused of abducting the teenagers, engaging in sexual slavery and prostitution, and operating a baby factory. 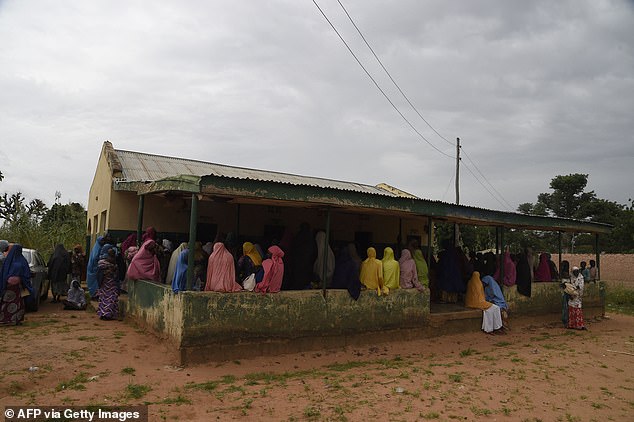 This photo, from September last year, shows mothers with acute malnourished babies sitting on the floor and fences to be attended by health officials at Bini primary health clinic, Wamako district of Sokoto in northwest Nigeria

‘All suspects will be charged to court at the end of investigations.’

The so-called ‘factories’ are usually small illegal facilities parading as private medical clinics that house pregnant women and offer their babies for sale.

In many cases, young women have been held against their will and sexually assaulted before their babies are sold on the black market.

In other cases, unmarried pregnant women are promised healthcare, only for their children to be taken away. In others, women are raped and made pregnant.

In April police raided a baby factory and two unregistered orphanages in Lagos and rescued more than 160 children, some of whom had been sexually abused.

Two months earlier in February, Lagos police told local media they had uncovered a case where a pregnant woman went to a private home to have her baby delivered – only for the baby to be taken away and sold.