DR ELLIE CANNON: Do I really need to undergo a painful prostate biopsy?

I am a fit and healthy 50-year-old but my doctor says I should have a prostate biopsy as the PSA reading in my blood test was a little high.

Are there any downsides to having one?

It is always important to ask what the downsides might be of any investigation or treatment.

A biopsy involves taking a small sample of tissue from an area of the body in order to examine it under a microscope and look for disease.

Some people find them incredibly painful, or they suffer bleeding. This is why doctors generally recommend one only when it might be needed to diagnose a cancer.

In the case of a prostate biopsy, it is important to know the facts.

This week a reader asks DR ELLIE CANNON: I am a fit and healthy 50-year-old but my doctor says I should have a prostate biopsy as the PSA reading in my blood test was a little high. Are there any downsides to having one?

PSA is a compound released in larger quantities by the prostate when cancer develops, but this is not always the cause. Other reasons why a reading might be high include a urinary infection or an enlarged prostate.

Even sex or heavy exercise can increase the figure.

Doctors should recommend a biopsy only if these other reasons have been ruled out. And these days, an MRI scan is usually arranged before a biopsy to make sure it isn’t done unnecessarily.

Three out of four men with a raised PSA will not have cancer.

In a prostate biopsy, tissue is taken via a needle through the perineum, the area between the anus and scrotum. There is usually a sharp pain each time a sample is taken – but sometimes as many as 30 may be needed.

Some patients find that the pain lasts for a couple of days, and, like any procedure, there is a risk of infection. This is precisely why all the pros and cons should be fully discussed with a specialist before you go ahead and decide to have the biopsy.

I am a divorced 55-year-old with an adult child who has left home. A few weeks ago a small boy was murdered by his stepmother locally, which caused a national outrage.

I didn’t know them, but for some reason the news has hit me hard. I keep crying about it for hours after work, sometimes uncontrollably.

I am finding it difficult to sleep. I am normally a happy person – what’s happened to me?

Last week I wrote about how prescription charges can be incredibly expensive when you tot them all up, with some patients forced to pay thousands every year.

Surprisingly, I had a number of letters questioning my facts.

Readers drew my attention to the pre-payment system, which lets patients who rely on lots of medications pay a set fee of about £108 annually, or £30 every three months.

I am afraid they are wrong. The truth is that pre-payment cards are not available to every patient, as many pharmacies and GPs don’t offer them.

Recent research shows that two-thirds of people with long-term conditions don’t have the cards, and one in five patients don’t even know they exist.

So patients will have to fork out thousands every year – and I know several in this situation.

It is common to feel worried if we have an extreme emotional response to an event – either in our lives or beyond.

In fact, it is perfectly understandable, especially when an awful tragedy happens close to home. And some people are simply more empathetic than others.

It is entirely possible to suffer grief and feel the aftermath of a traumatic event without a personal connection to it.

When a tragedy happens in a tight-knit community, it often makes residents feel more fearful for their own lives and perhaps more aware of their own mortality.

Local places, such as religious buildings or community centres, may offer events or groups where there are likely to be people experiencing similar feelings.

But there are practical things you can do to help in this situation, too.

It sounds obvious, but try to exclude yourself from certain scenarios that could trigger the extreme emotions – reading in depth about the tragedy on the internet, for instance.

Instead, look for activities that relax you. Perhaps reading, or try an art or exercise class.

Often with something like this, you just need time to make the feelings easier to cope with.

In the meantime, focus on distracting yourself from unpleasant thoughts.

It is important to recognise this is grief and allow yourself to feel it.

I have a large, scabby mole my GP said could be skin cancer – either basal cell carcinoma or squamous cell carcinoma – and I was given an urgent referral to a dermatologist.

But the appointment was over the phone and, after looking at pictures, my consultant said it was more likely to be something harmless called seborrheic keratosis.

Should I ask for a second opinion?

In the vast majority of cases, dermatologists are able to tell via a photograph if a lesion is likely to be cancerous.

It seems unbelievable, but modern equipment and technology means that it is safe to rely on a remote specialist consultation.

The images are even more accurate if the GP has used a dermatoscope – a special microscope used for examining skin lesions close up. We use these to take photos which are then sent on to consultants.

We also used these methods before Covid to speed up the time it takes for a specialist to see the photographs.

But this only works well if the photos are taken on a specialist medical camera. The same doesn’t apply if the patient, or doctor, takes their own photos on a smartphone.

It is always possible to ask for a second opinion – either ask to see a different specialist via the GP, or ask the GP what they think of the outcome.

They look like crusty, rough lesions and feel as if they have been stuck on to the skin.

Each of the skin cancers has specific characteristics which a dermatologist is well placed to spot on medical images.

The only way to be 100 per cent certain is to have the lesion removed and examined. However, removing a lesion that could be harmless also leads to problems such as scarring larger than the lesion.

Most patients would rather avoid this, especially on the face.

NOW we can ditch USELESS video calls with patients

That was confirmed last week in a report by researchers at the University of Oxford, which included feedback from patients, doctors and technology experts.

The study concluded that seeing patients via a video call risked missing serious diagnoses and that patients were rarely satisfied. 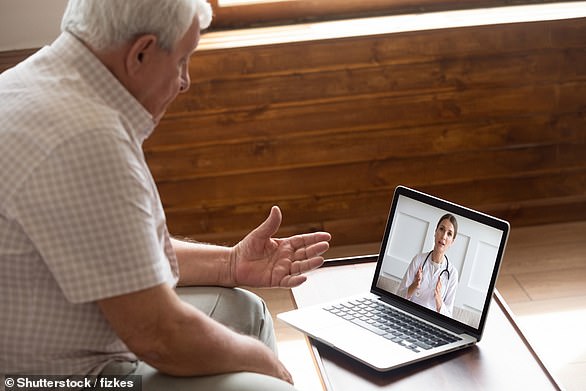 I’ve been saying for years that video consultations were mostly a waste of time – especially when the former Health Secretary Matt Hancock seemed obsessed with pushing them on patients in 2020.

Patients are often surprised when I reject their request for a video call and say that I’d rather speak to them on the phone instead.

Thankfully, video calls aren’t widely used in NHS GP practices any more, the report stated, and I hope it stays that way.