Dr. Fauci and heads of CDC and FDA will testify remotely to committee headed by quarantined senator

Three senior health officials in the Trump administration who are in self-quarantine after coming into contact with someone infected with coronavirus will testify remotely before a Senate committee whose chairman is also in isolation.

Senator Lamar Alexander will not return to Washington this week and will self-quarantine in his home state of Tennessee after a member of his staff tested positive for COVID-19.

The Republican senator will be working remotely and will chair the Senate health committee hearing on Tuesday morning by video conference.

Fauci, Redfield and Hahn have also self-quarantined after exposure to an infected staffer.

Senator Lamar Alexander, the Republican from Tennessee who chairs the Senate Health, Education, Labor, and Pensions Committee, will self-quarantine in his home state after a staffer tested positive for COVID-19. Alexander is seen above on Capitol Hill on Thursday 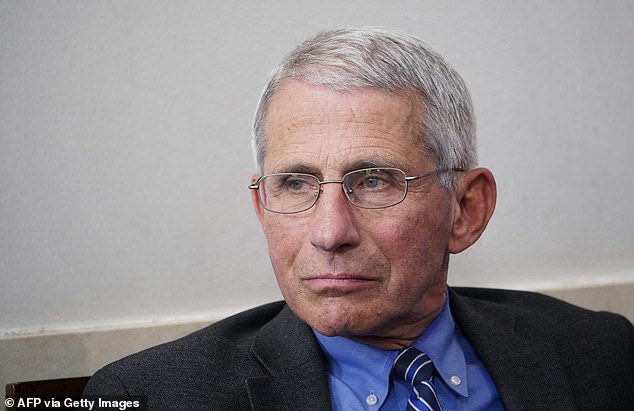 Dr. Anthony Fauci, the director of the National Institute of Allergy and Infectious Diseases and member of the White House’s coronavirus task force, will testify before Alexander’s committee remotely on Tuesday. He told CNN on Saturday that he will begin a ‘modified quarantine’ 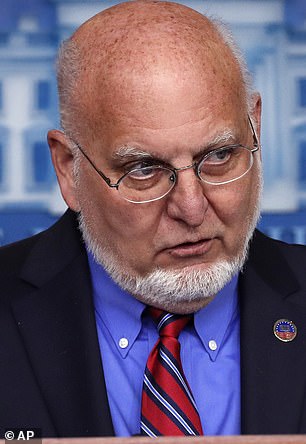 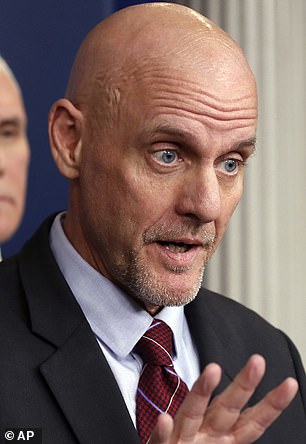 Robert Redfield (left), the director of the Centers for Disease Control and Prevention, and Stephen Hahn (right), the commissioner of the Food and Drug Administration, said they will self-quarantine for two weeks after coming into contact with an infected White House staffer

The witnesses will testify from remote locations as well.

Alexander consulted with his physician and decided not to go back to Washington.

He will self-quarantine for 14 days ‘out of an abundance of caution.’

Cleary said almost all of the senator’s Washington staff are working from home, and there is no need for any other staff member to self-quarantine.

Fauci, the director of the National Institute of Allergy and Infectious Diseases, told CNN on Saturday that he will begin a ‘modified quarantine’ after coming into ‘low risk’ contact with someone who tested positive for COVID-19.

Redfield, the director of the Centers for Disease Control and Prevention, ‘will be teleworking for the next two weeks’ after a ‘low-risk exposure’ on Wednesday to a person at the White House who has the disease, The Washington Post reported on Saturday, citing a spokesman.

Hahn, the commissioner of the Food and Drug Administration, is in self-quarantine for a couple of weeks after coming into contact with someone who tested positive for COVID-19, an FDA spokesman told Reuters late on Friday.

Hahn immediately took a diagnostic test for the coronavirus and the results were negative, FDA spokesman Michael Felberbaum said in an emailed statement.

‘As Dr. Hahn wrote in a note to staff today, he recently came into contact with an individual who has tested positive for COVID-19. Per CDC guidelines, he is now in self-quarantine for the next two weeks,’ the FDA spokesman said. 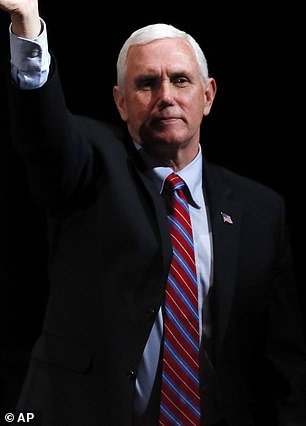 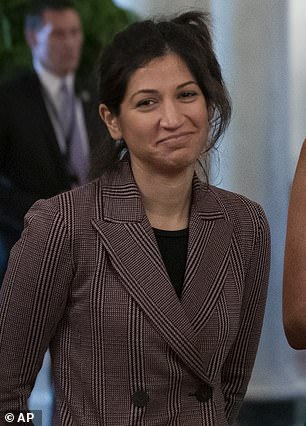 Vice President Mike Pence (left) denied on Sunday that he is self-isolating after his press secretary, Katie Miller (right), tested positive for COVID-19

An administration official said earlier on Sunday that Pence was voluntarily keeping his distance from other people in line with guidance from the Centers for Disease Control and Prevention.

He has repeatedly tested negative for COVID-19 since his exposure but was following the advice of medical officials.

‘Vice President Pence will continue to follow the advice of the White House Medical Unit and is not in quarantine,’ spokesman Devin O’Malley said Sunday.

‘Additionally, Vice President Pence has tested negative every single day and plans to be at the White House tomorrow.’

Pence has been at home since returning to Washington from a day trip to Iowa on Friday and did not appear at President Donald Trump’s meeting with military leaders Saturday at the White House.

Pence was informed of his press secretary’s positive test shortly before departing for that trip.

The diagnosis of Katie Miller, who is married to White House immigration adviser and speech writer Stephen Miller, was revealed by Trump in a meeting with Republican lawmakers on Friday.

A valet for Trump has also tested positive along with Ivanka Trump’s personal assistant. 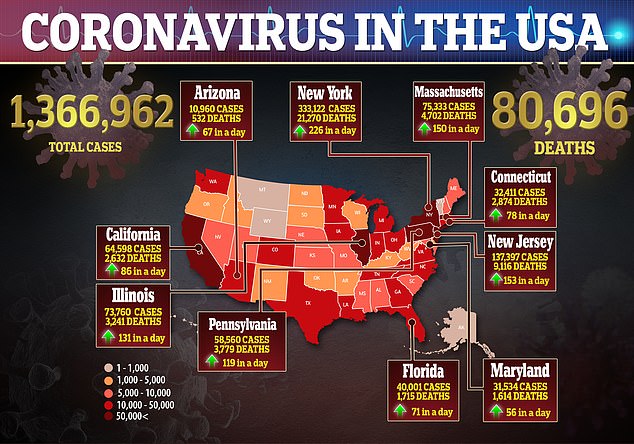 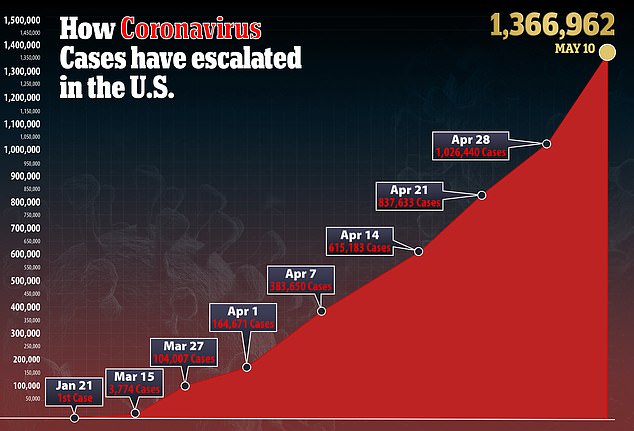 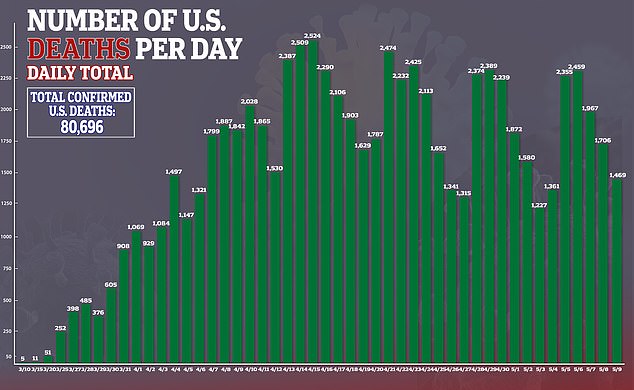 The assistant has not been around Ivanka Trump for weeks and has been working remotely, according to CNN.

The network reported that both Ivanka Trump and her husband, Jared Kushner, who also serves as a senior adviser to the president, tested negative for COVID-19.

Some 60 employees of the agency charged with protecting President Trump and other senior government officials are currently in quarantine due to the outbreak, according to Department of Homeland Security documents obtained by Yahoo News.

The current active cases of COVID-19 were reported as of Thursday.

It is not known if any of the infected employees were in close contact with Trump or Pence. 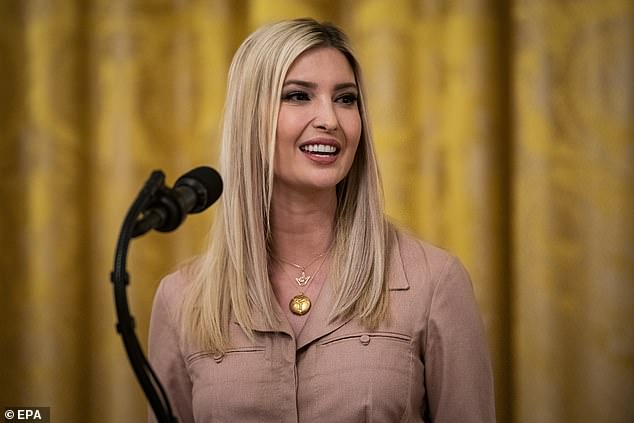 A personal assistant to Ivanka Trump (above), the president’s daughter who also serves as an adviser in the White House, is also reported to have tested positive for COVID-19 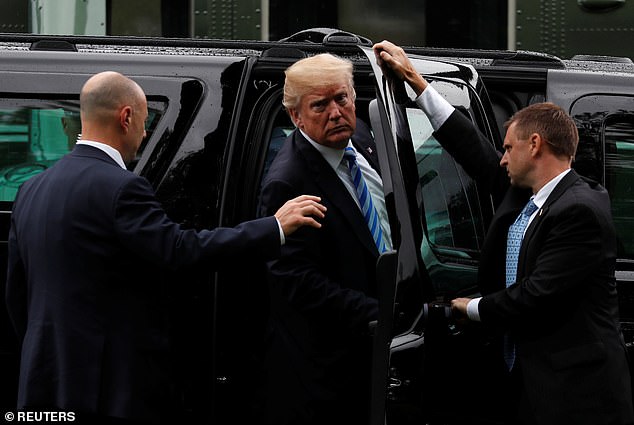 Secret Service agents hold the door for President Trump (center) in May 2018. Eleven members of the Secret Service have tested positive for COVID-19, according to an internet news report 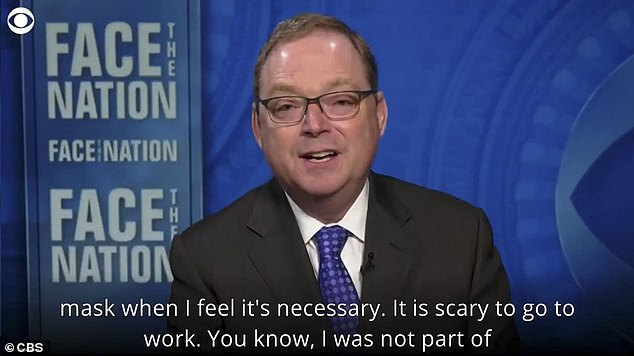 The Secret Service protects the president, the vice president, and visiting world leaders. It also has security details for living former presidents and other dignitaries.

Whelan told Yahoo News that the agency has been following prevention guidelines from the Centers for Disease Control.

The White House is taking extra precautions to ensure the safety of the president, the vice president, and their staff after a rash of positive COVID-19 tests affecting several aides.

Both Trump and Pence will be tested daily for the virus, according to USA Today.

Every staff member in close proximity to them will also be tested every day.

Anyone visiting the White House will also undergo testing.

Meanwhile, the cramped workspaces of the West Wing will be thoroughly cleaned while staff will follow social distancing guidelines.

White House employees will also have their temperatures checked daily while their symptom histories will be reviewed, according to a White House spokesperson.

‘The president’s physician and White House operations continue to work closely to ensure every precaution is taken to keep the president, first family and the entire White House complex safe and healthy at all times,’ White House spokesman Judd Deere said.

Meanwhile, it appears that senior members of the military may also have been exposed to the coronavirus.

The chief of the US National Guard, which is at the leading edge of the domestic military response to the coronavirus, is in limbo after testing positive and negative in conflicting tests this weekend, officials said on Sunday. 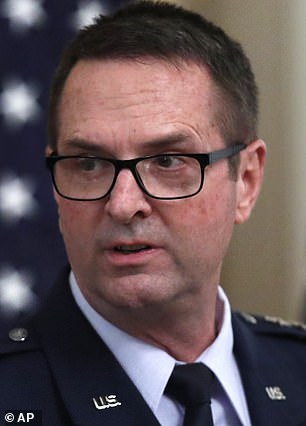 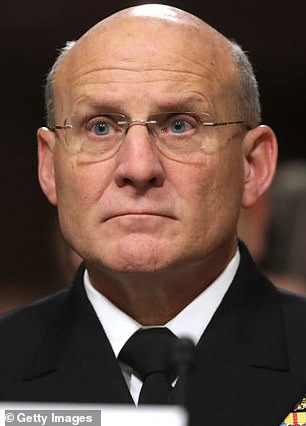 General Joseph Lengyel (left), the commander of the US National Guard, tested positive and negative for COVID-19. Admiral Michael Gilday (right), chief of US Naval Operations, tested negative, but will self-quarantine after coming into contact with an infected person

One of the officials, speaking on the condition of anonymity, said that in addition to General Joseph Lengyel from the National Guard, the Chief of Naval Operations Admiral Mike Gilday had come in contact with a family member who was coronavirus positive.

Gilday tested negative for the coronavirus but would quarantine himself as a precaution.

One of Trump’s top economic advisers admitted Sunday that it’s ‘scary’ to think about going back to work, voicing his own concerns about working at the White House in the midst of the pandemic.

‘I think that I’d be a lot safer if I was sitting at home than I would be going to the West Wing. But, you know, it’s the time when people have to step up and serve their country.’

TOP US OFFICIALS IN QUARANTINE

Robert Redfield, director of the Centers for Disease Control and Prevention

Stephen Hahn, commissioner of the Food and Drug Administration

US Navy soldier who serves as valet for President Trump

‘Nobody knows it,’ Hassett told CBS News Sunday morning when asked about the ‘silver lining’ he proposed two days ago in front of the president.

‘And, you know, and it’s very unsatisfying.’