Dr. Anthony Fauci said there is a ‘promising’ coronavirus vaccine entering phase three trials next month and there could be a cure ready by early next year.

The director of the National Institute of Allergy and Infectious Diseases, in his testimony before Congress on Tuesday, said there were several vaccines moving through the federal approval process at ‘various paces.’

‘One of them will enter phase three study in July. This is one that has already shown in preliminary studies, some very favorable response in the animal models that were developed,’ he told members of the House Energy and Commerce Committee in his opening remarks. 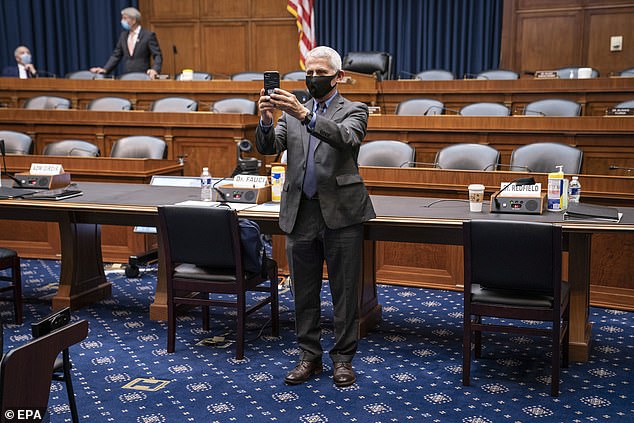 Dr. Fauci was spotted taking selfies before he testified before the House Energy and Commerce Committee

In Phase III, the vaccine is given to thousands of people and tested for efficacy and safety, according to the Centers for Disease Control and Prevention.

‘We feel cautiously optimistic,’ Fauci added and said he expects there to be a vaccine ‘within a year from when we started, which would put us at the end of this calendar year at the beginning of 2021.’

Fauci’s testimony comes as President Donald Trump has urged the country to reopen – a move health care professionals have warned should proceed with caution.

The United States has had more than 2.36 million coronavirus infections and more than 122,000 people have died.

Several states in the reopening process, including Texas, Oklahoma and Florida, have seen increased number of cases as stay at home orders have eased up and businesses have begun to reopen.

Nationwide, there has been a 15 per cent increase in cases over the past two weeks, with the biggest jumps coming in the South, West and Midwest.

The White House is preparing for a possible second wave coming this fall.

‘We are filling the stockpile in anticipation of a possible problem in the fall. We are doing everything we can beneath the surface, working as hard as we possibly can,″ trade adviser Peter Navarro told CNN on Sunday. ‘You prepare — you prepare for what can possibly happen. I’m not saying it’s going to happen, but of course you prepare.’