What a difference 24 hours makes: Queensland’s top doctor suddenly ditches her AstraZeneca phobia as the state rushes to get 150,000 AZ jabs into arms to tackle worrying Delta outbreak

Queensland’s chief health officer has suddenly changed her tune on young people getting the AstraZeneca vaccine as the state’s Delta variant outbreak surges.

Dr Jeannette Young has long insisted only those aged over 60 should line up to get the AstraZeneca vaccine – despite Australian government advice recently shifting.

Even on Monday, Dr Young stood by her position that younger Queenslanders should wait for Pfizer or Moderna because of a rare risk of clotting illnesses.

She then nominated 60 as an appropriate age to get the Oxford University-designed vaccine.

But Dr Young appeared to shift away from her harsh previous stance on Tuesday, as the state reported 16 further cases of the highly infectious Indian Delta strain.

A reporter asked: ‘Should young people be talking with their doctors now about getting AstraZeneca?’

Dr Young responded: ‘Now is the time that people who are under the age 60 should be talking to their GP about what is best for them as an individual.

‘GPs know their patients and know what advice to give them’.

The softening of her position came as her advice to Queenslanders on Monday was contradicted by the Federal government’s acting top medical official.

Therefore, ‘the benefits of the Covid-19 vaccine AstraZeneca are greater than the risk of rare side effects occurring, in all age groups,’ Dr Kidd said.

The Federal government’s technical advisory group on immunisations (ATAGI) has urged any Australian who don’t have access to Pfizer to ‘re-assess’ getting an AZ jab.

Dr Young on Tuesday pointed to that advice in making her comments.

‘The ATAGI advice said that when we reach a large outbreak – which I think that we’re on the verge of (and) I suspect it will become larger, that is the time to discuss that with your GP,’ she said of people receiving AstraZeneca.

The shift came as the state’s Health Minister Yvette D’Ath enthusiastically welcomed a promise of an additional 150,000 AstraZeneca vaccines from the Federal Government this week.

‘We will take them and more,’ Ms D’Ath said. 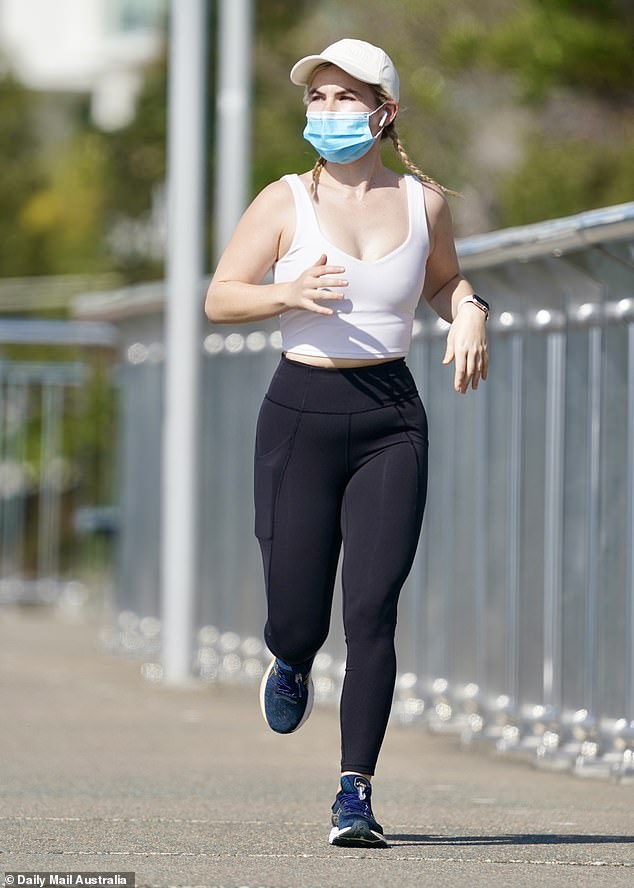 A jogger wears a mask during her run around Brisbane earlier this week. South-east Queensland’s lockdown is due to run until least Sunday

NSW authorities have urged all residents aged over 18 to go and get AstraZeneca, given people under 40 are mostly likely to contract and spread the virus.

‘The health advice for Greater Sydney has changed in relation to AstraZeneca,’ Ms Berejiklian said.

‘All adults can come forward and get the AstraZeneca vaccine. If anyone has concerns they can go to their GP.’

Queensland’s contact tracers have been focused on Brisbane schools with the latest outbreak. 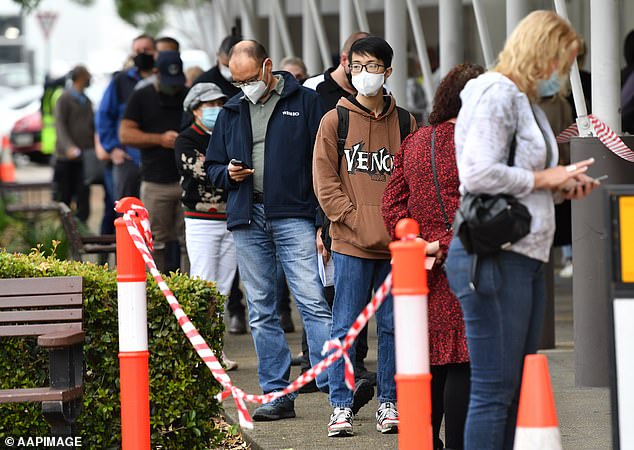 Five new cases are household or family contacts of already confirmed cases. Another was a neighbour of a known case.

The new cases, calculated from 34,178 tests, bring the number of active cases linked to the current outbreak to 47.

Dr Young said the threshold for lifting the state’s lockdown next Sunday at 4pm would be the number of cases in quarantine.

‘On Sunday, we will want to have seen that any new cases that have been coming up have been in quarantine for their full infectious period.’