Dr Martin Scurr: Will my cooker stop a pacemaker working?

My wife is due to have a pacemaker fitted. But we’ve heard there’s a risk to it when using an induction cooker, and that she’ll have to stand 24 in from the hob when cooking. Is this correct? Will she need to wear a lead apron to protect herself?

There is very little information available to ease your concern, so I discussed this with a consultant cardiologist and electrophysiologist who works on the frontline treating abnormal heart rhythms.

The opinion is reassuring — pacemakers are not at risk from such hobs and you needn’t worry.

To explain why, a brief diversion into the physics of induction hobs is needed.

The hobs consist of a glass or ceramic plate with an electromagnetic coil beneath the site of each burner. When on, a current runs through the coil, generating an intense electromagnetic field, and is passed on through the metal of a pan placed on top, causing it to heat up. This magnetism is induced only in a type of metal known as ferrous metal (which basically means it contains iron).

I assume the concern you have raised is based on the belief that pacemakers — which are made of metal and emit electrical signals — may be interrupted by the force of an external electromagnetic field. But this is flawed.

Pacemakers — implants about the size of a 50p coin which monitor the activity of the heart and ensure it pumps with a regular rhythm — have batteries, sensors to detect the rhythm and two wires that lead into the heart via major blood vessels: one to detect the heart’s electrical behaviour and one to send an impulse if needed.

But here’s the crucial detail: none of the components in a pacemaker contains ferrous metal. Therefore, they are not affected by electromagnetic fields.

Furthermore, the electromagnetic field within the hob is localised, so even standing next to it when cooking is still too far for the signals to have any influence through other mechanisms.

This is why metal tools and other ferrous materials in the kitchen don’t go flying across the room when the hob is in use.

Readers may be aware of a recent study that suggested devices such as hairdryers, electric razors and drills could interfere with a pacemaker. However, the difference here is that these devices have an electric motor which produces a stronger electromagnetic field that covers a slightly longer range than an induction hob. These cases are still rare. Crucially, problems occur only when these are held close to the chest wall, so keep the devices at arm’s length — the electromagnetic field is limited in range so there is no danger from this distance.

There is no value in using a lead apron as these are used to protect against radiation and have no effect on magnetic fields.

Two weeks before Christmas I slipped across a supermarket floor and banged my head. Soon after I started to suffer with giddy spells and nausea. What’s caused these symptoms?

What you describe as giddy spells are a symptom of benign paroxysmal positional vertigo — a harmless condition where brief episodes of sudden dizziness occur, as if the world is spinning or tilting. The nausea is also supportive of this diagnosis.

Our perception of balance and orientation originates in three fluid-filled canals with hair cells in the inner ear. Normally as the head moves, so does the fluid against these hair cells, which sends nerve impulses to the brain informing it about the body’s position. 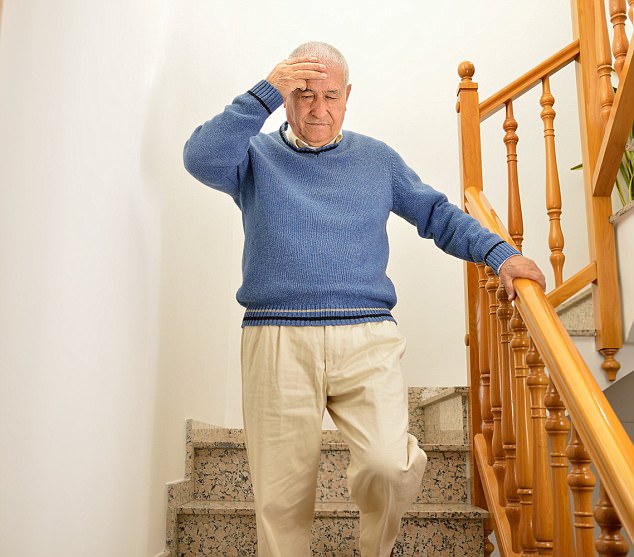 With your condition, a build-up of calcium crystals, called canaliths, in the ear canals disrupts these messages to the brain.

Your head injury is likely to have caused the crystals — which are usually found elsewhere in the inner ear — to migrate into the fluid-filled canals.

As you move your head, these crystals tumble about excessively on the hair cells, giving the false impression that you’re moving around a lot and causing the spinning sensation.

The symptoms normally resolve spontaneously, but medications that sedate the balance mechanism can reduce symptoms while you await the crystals’ gradual migration back to their usual position.

Your GP may refer you to a specialist for canalith repositioning, or the Epley manoeuvre, which involves moving the head around in certain positions to shift the crystals out of the ear canals.

By the way… is this why sperm counts are falling?

My role mainly consists of answering health questions and educating, but on occasion I’m prompted to ask questions and raise concerns myself.

The puzzle I have revolves around two unexplained issues: firstly, as a recent report confirms, sperm counts have fallen by more than 50 per cent in 40 years; and second, there is an epidemic of gender confusion among the young.

Ever greater numbers are concerned that their gender is not aligned with their sex as determined by their chromosomes and anatomy.

My question is: could these two phenomena be linked?

It is already established that our world is polluted with endocrine-disrupting chemicals that alter the normal function of our hormones. These chemicals powerfully bind with oestrogen or androgen receptors in the body and stimulate or block normal hormonal functions.

One such chemical is glyphosate, commonly used as a weedkiller on wheat prior to harvesting. But it is also present in the flour used for making bread, so is detectable in most people — tests have confirmed that it is present in samples taken from people in 18 countries across Europe.

Is it possible that such endocrine-disrupting chemicals might be interacting or interfering with hormone sites in the developing brains of infants and children and — possibly — altering future perceptions of gender?

After all, the brain is the control centre for the entire hormonal system, and it is already known that pesticide exposure affects sperm cell formation.

What is needed is research and much more scientific investigation into what may be a worldwide problem.

There is much to explain, and we should all be concerned.