We will, in years to come, look back and wonder how we could have been so foolish — so incredibly blind to the dangers of cannabis.

We will be horrified at our reckless disregard for young minds. We will berate our liberally-minded politicians for their weakness, and the police for allowing, what is, in effect, its decriminalisation.

And we will feel justifiable fury towards those who demanded the liberalisation of drug laws; who denied the mountain of evidence that this is a highly damaging intoxicant with a profound effect on the structure and function of the brain, and a ‘gateway’ to other illegal drugs.

It’s a bitter irony that, just as we are becoming more understanding about mental illness and showing greater concern for sufferers, we are ignoring the risks of a drug directly responsible for destroying mental health [File photo]

As the Mail reported this week, a new study undertaken by researchers at Oxford University shows that cannabis increases the risk of depression in teenagers by a staggering 40 per cent.

To healthcare professionals — doctors, nurses, counsellors — this will come as no surprise. We really don’t need to read any more studies showing its link to depression, anxiety, lack of motivation and psychosis, because every day we see the consequences of society’s increasingly blasé attitude to cannabis.

We are frontline witnesses to those whose lives are blighted by mental illness because of their habit, so I make no apologies for how strongly I feel about this. 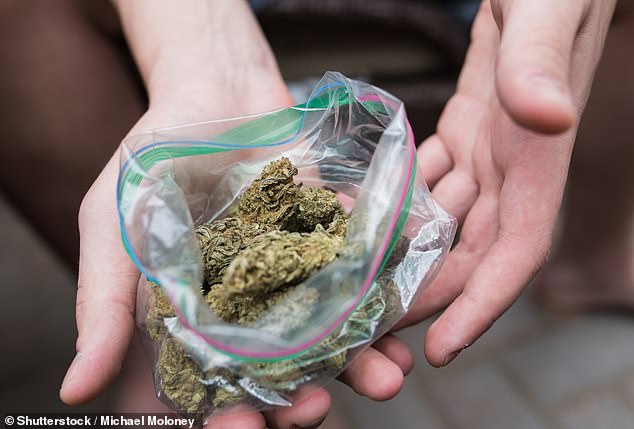 What I’d like to see right now is a major public education campaign that tells youngsters the truth about cannabis and spares them none of its horror. We owe it to the generations to come [File photo]

Over the years, I’ve seen too many patients like Robert. Blank-eyed and impassive, he was brought into the clinic barely an hour after he tried to hang himself, with the ligature marks around his neck painfully visible.

It had been pure luck she arrived home when she did, his mother told me. ‘Just a minute later and …’ Her voice trailed off.

Robert was 18. He’d been a hard-working A-level student and was planning to study engineering at university. Then he stopped socialising, became increasingly withdrawn and his school work deteriorated. As he spiralled into depression, his family barely recognised their once-lively boy.

It all began, his mother told me, when he started ‘dabbling’ with cannabis. As his habit grew, they pleaded with him to stop — but a vicious cycle was established.

The more dope he smoked, the more depressed he was. So he smoked even more to escape his despairing mood.

Robert is just one of countless young people I’ve seen over 15 years of working in mental health, their minds broken by cannabis.

I am sickened by campaigners and politicians who tell us that the only way to deal with this scourge is to decriminalise the drug, as several U.S. states have done. And this despite reports of increasing violence and of a mental health crisis that’s followed in the wake of liberalisation. 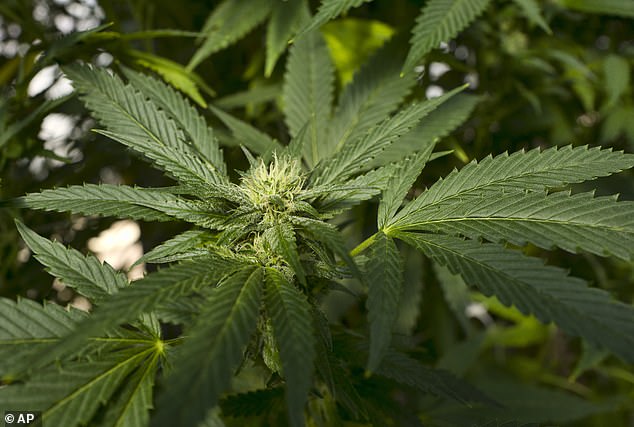 In Japan and Singapore, where the possession and sale of cannabis is dealt with severely, its use is practically unheard of. We could do the same here, but there’s no political will for it [File photo]

What we should be doing here in Britain is clamping down ever harder — with tough sentences for those who break the law.

The sorry reality, though, is that cannabis is already effectively decriminalised. Few now bother even to conceal their habit. Walk down any city street and you can smell it. Users appear confident that no one will take action.

We are losing the war on drugs, comes the cry, so what’s the point of involving the courts.

Yet there was never a real war on drugs because the law wasn’t truly enforced in the first place.

In Japan and Singapore, where the possession and sale of cannabis is dealt with severely, its use is practically unheard of.

We could do the same here, but there’s no political will for it. Instead, we play Russian roulette with the mental health of millions — and especially of teenagers, whose immature brains are extremely vulnerable.

It’s a bitter irony that, just as we are becoming more understanding about mental illness and showing greater concern for sufferers, we are ignoring the risks of a drug directly responsible for destroying mental health. 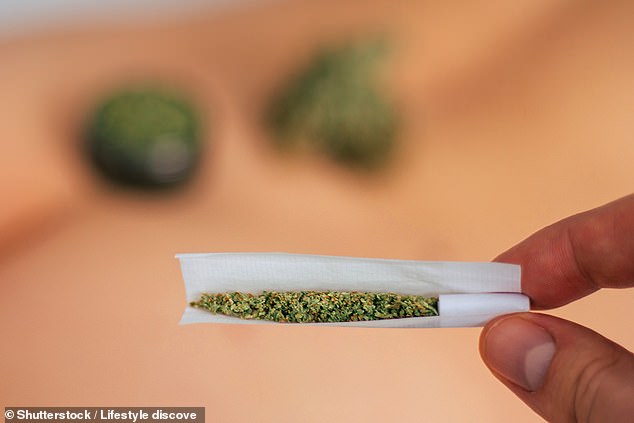 I am sickened by campaigners and politicians who tell us that the only way to deal with this scourge is to decriminalise the drug, as several U.S. states have done [File photo]

As for those smug, ageing, liberals who smoked their way through the Sixties and Seventies and claim that a daily spliff or three did them no harm, well, they are supremely ignorant of the type of cannabis — super-strong skunk — that’s on the streets today.

We are facing the worst possible scenario. Parents, teachers and healthcare professionals who try to steer their children away from cannabis are entirely unsupported by the justice system. But, equally, the authorities won’t openly legalise it, when at least the level of potency could be monitored and sales regulated.

I don’t believe this is the answer by any means, but the current fudge helps no one.

What I’d like to see right now is a major public education campaign that tells youngsters the truth about cannabis and spares them none of its horror. We owe it to the generations to come.

Fasting is a hot new trend. Neil Jones, one of the professional dancers on Strictly Come Dancing, has just gone four days without eating — and told everyone about it on social media.

But this is not a new fad. For centuries, people have endured periods of abstinence from food and drink, often for religious reasons. Now it’s so they can brag about it on Twitter!

Fasting might make you feel good (as all my anorexic patients tell me), because starvation triggers the release of a chemical in the brain that has a similar effect to the drug ecstasy.

It also gives you a sense of control over your body. But don’t ever kid yourself it’s healthy!

I’ve no doubt that Health Secretary Matt Hancock cares deeply about the NHS and wants to secure its future. However, his prescription for achieving this seems to be misguided.

Whatever problem the NHS faces, his answer is ‘Dr Digital’. So yet more technology, be it apps, emails or websites. He’s a man obsessed.

This week he was banging on about it again, telling GPs they must email patients rather than sending them ‘snail mail’ (letters). 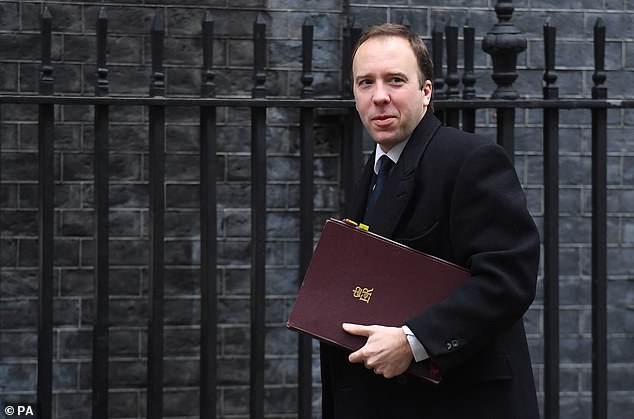 One of the reasons we still use faxes (although not for much longer, as Mr Hancock (above) has banned them) is because they’re more reliable than the rackety old PCs we have access to [File photo]

Which is all very well until you talk to GPs, who complain their computers are so antiquated that half the time they can’t even log on to the internet, let alone send an email.

They routinely have problems with the existing electronic records and prescription system, while expensive iPads sit unused because the software won’t integrate with NHS systems.

One of the reasons we still use faxes (although not for much longer, as Mr Hancock has banned them) is because they’re more reliable than the rackety old PCs we have access to.

The Health Service is beset by IT problems. Can we sort this out as a priority, please?

And, Mr Hancock, please remember that all most people want is to be able to get an appointment to see a GP. A follow-up letter or email would be a bonus!

Too many older people are being prescribed antidepressants, according to a study by University College London and Bristol University.

Four in ten people over the age of 75 have depression, yet fewer than four per cent are referred for the talking therapies that we know are effective (such as cognitive behavioural therapy).

This is disgraceful. It is a clear example of the ageism that is rife in the NHS.

I worked in one clinic dedicated to geriatric mental health where we didn’t have a single psychologist. Antidepressants were our only recourse.

This attitude is based on the belief that old people won’t change their thinking to boost their mental health.

Yet there’s good evidence this age group responds just as well to therapy — and it’s their right to access it.

Volunteering in the NHS

An incredible 33,000 Mail readers signed up to start six-month volunteering placements thanks to the Mail’s Hospital Helpforce campaign in December.

Now, new research shows that the support of volunteers can allow patients to return home earlier, help prevent malnutrition and falls on wards and alleviate loneliness.

This is exactly what the NHS needs, so let’s keep it going. If you haven’t already signed up, you can still do so at www.helpforce.community.