DR MAX THE MIND DOCTOR: You can really knit your way to happiness and a stress-free life

This week I discovered a new book called Craftfulness: Mend Yourself By Making Things.

Craftfulness, it seems, is the next ‘big thing’ to help boost our mental health.

Naturally, I wanted to know more.

Craftfulness, according to its practitioners, combines positive psychology and neuroscience with mankind’s inherent desire to ‘create’ in a technique that relaxes and heals the mind.

The key is to focus actively on a task that often involves an element of repetition — such as sewing, knitting, model-making, painting etc.

Another new book in this fast-expanding genre is Knit And Nibble — combining knitting and baking to aid well-being.

Craftfulness, it seems, is the next ‘big thing’ to help boost our mental health

This approach is in direct contrast to mindfulness, the fashionable psychological fad of the past decade, which revolves around ‘living in the moment’, and is both passive and introspective.

As someone who’s taught mindfulness to patients, I rather think craftfulness might have the edge.

Some years ago, while I was working with patients with severe, complex mental health problems, a new member of staff started a mindfulness course.

I’d never heard of it and was astounded at the difference it made.

People who’d been overwhelmed by their emotional stress, unable to manage even the most basic functions of life, were transformed after being coached in the practice.

…if you are prone to anxiety.

A new Japanese study adds to mounting evidence for the powerful calming effects of this herb.

Now we learn it works on the same parts of the brain as benzodiazepines such as diazepam (Valium), but without the sedating or addictive qualities of these drugs.

You can inhale the oil or even take capsules, as I discovered last year while studying for important exams.

For a time, I was convinced that mindfulness was the answer to all problems.

But then the course ended and that same colleague started a new project — forming a gardening group. The impact on patients was no less dramatic.

It was then I realised that the therapeutic effect had more to do with my colleague and his way of talking and interacting with patients than it did with the technique he used.

However, I also saw that gardening as therapy had a significant advantage over mindfulness. It was social, it got patients outdoors, and it was rewarding for them to see the effects of their labour.

Most of our patients carried on gardening even when my colleague moved on.

This was in marked contrast to mindfulness, which nearly all our patients stopped doing once the course ended.

Now, I suspect that was because it’s a solitary activity, and also because it’s actually quite hard to ’empty’ your mind and concentrate on nothing very much except your breathing.

Nor is there much sense of accomplishment when it’s over.

That’s not to say mindfulness doesn’t have a place, but I know that it’s not the panacea I once believed it to be.

When minds are racing and hearts are beating rapidly as anxiety strikes, it can be too much of a challenge for someone to focus on their breathing and ignore unhelpful thoughts.

The ‘distraction’ that craftfulness offers is precisely what many people struggling with mental health issues need.

If you doubt me, just watch a child as he or she makes something, draws or colours in. Their absorption is total.

It can be the same for adults, too — if we just immerse ourselves in an activity.

I’d go further and argue that it also fulfils a deep-seated human need to create.

I know from my study of anthropology that the creation of artefacts is key to the evolution of culture and a way in which we show ourselves to be in control of our environment. Of course, none of this is really new.

I think of my gran, who would sit on the sofa every evening, her needles clicking away as she knitted another sweater or scarf, while my grandfather lost himself in his hobby, making wooden ornaments.

The older generation knew what we are only now rediscovering.

What a shame schools no longer teach needlework or woodwork, and that design and technology classes more often involve computer programs than youngsters working with their hands.

Our minds are never freer than when they’re concentrating on doing.

Why folic acid can be BAD for the elderly

Twelve years after experts recommended the addition of folic acid (vitamin B9) to flour to help reduce the rates of spina bifida in unborn babies, the Government has agreed to a consultation on the issue.

The proposed plan is to add folic acid to all flour — except wholemeal — at the milling stage, so we have little option but to buy fortified bread. So what, you may ask? Surely, saving a child from disability is a price worth paying.

Unfortunately, the initiative may have a potentially catastrophic effect on older people, but I have yet to hear anyone voice concern.

For there is another vital B vitamin we must consider: B12 is essential for several physiological processes, especially the functioning of the nervous system. Along with folic acid, it is also vital for the production of blood cells.

B12 is found in fish, meat, poultry and dairy products, and is absorbed from the gut. However, as people age, their bodies becomes less efficient at absorbing it, and it’s common for the elderly to be deficient.

The first sign is anaemia, but if left untreated, devastating damage to the nervous system can result.

It’s complicated but, put simply, mass supplementation of our diets with folic acid would benefit the elderly who have anaemia — but it would also mask a B12 deficiency.

While there’s support for adding folic acid to flour to protect unborn babies, old people are, in effect, being discriminated against. It’s a complex moral dilemma and we should at least be talking about it. 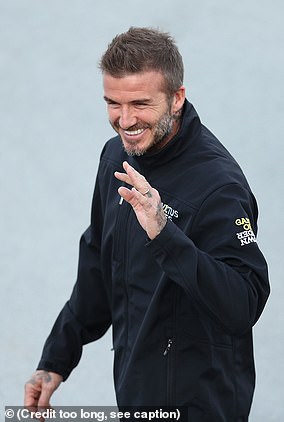 I am baffled by the vitriol heaped on David Beckham after his comments last week that ‘to be married for the amount of time that [Victoria and I] have, it’s always hard work, everybody knows that but you make it work’.

He was speaking the truth. Relationships are hard work, and long-term relationships the hardest of all.

I was reminded of his comments when reading about a study in the U.S. this week which found that many people who are in unhappy relationships fail to break up with their partner because they worry about how he or she would cope.

This was regarded as a ‘bad’ thing and the study concluded that people should be encouraged to think more about their own needs: to be selfish rather than selfless.

I’ve seen many people who are suffering with low mood and anxiety that’s caused by a problem relationship. And, yes, sometimes, breaking up is the best thing.

But I’m not an advocate of being selfish. It makes it too easy to give up and flounce off at the first hint of discord.

The alternative is to flit from relationship to relationship — and I’ve known patients who do this, with damaging consequences for their mental health — always in search of ‘the one’; that perfect match which, of course, in reality just doesn’t exist.

Putting our partners first and learning some tolerance — as no doubt David and Victoria have learned to do — is a bigger challenge, but it’s the foundation of something enduring and worthwhile.

Ricky Kennedy, a 57-year-old grandfather from Dumbarton, developed life-threatening sepsis after biting his nails and developing an infection.

While such cases are rare, all too often the habit is dismissed as nothing serious.

Yet nail biting is one of a set of conditions known as Body Focused Repetitive Behaviours which include hair pulling and skin picking.

People often aren’t offered treatment until these behaviours become serious, but even when mild, they can be an indicator of an underlying stress or anxiety disorder.

Cognitive Behavioural Therapy (CBT) can be effective — and surely it’s far better to learn techniques that help you manage stress in a constructive way than to be endlessly punishing your own body.