DR MICHAEL MOSLEY: Does your hair fall out in summer? Don’t panic!

Summer, a time for barbecues, holidays and stripping down to your bare essentials. It’s also the time of year when people are most likely to tap in the words ‘hair loss’ into Google, according to a recent study. There is a reason for this: many of us will start to thin out on top during the summer. But my message is: don’t panic.

Before I explain why, it’s important to understand how hair ‘works’. A single hair grows for three to five years. After that, it falls out and the follicle enters a dormant stage for about three months before the cycle starts again.

Although it’s not fully understood why, a greater number of follicles remain dormant for longer in summer, according to researchers. During winter and spring, the growth cycle speeds up again. In addition, some studies have suggested that we lose up to twice the number of hairs in summer compared to the colder months.

So the balance tips. More hairs fall out than grow, making hair seem thinner. Strangely, the speed of hair growth increases in summer and slows in winter – so, although we have fewer hairs, what we do have grows faster.

As hair continues to drop out gradually, the thinning only gets noticed months after whatever interfered with the new growth cycle – which is why it often seems mystifying. But in many people, it’s just a blip. Once life gets back to normal, so does the hair-growth cycle.

My point is, hair loss is massively common. And a lot of the time, it’s not a sign that we’re about to go bald.

But it’s also an undeniable fact that many of us do start to get a bit thin on top as we get older. Ignoring seasonal changes, when we are young, new hairs grow at roughly the same rate as we lose them. But as we age, hair still sheds but more follicles remain dormant or grow thinner hairs. 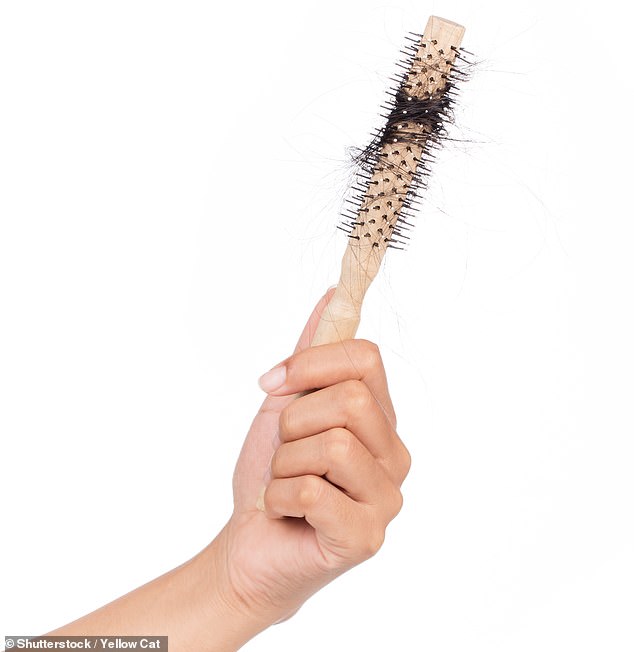 Although going bald is more common in men, 40 per cent of women have visible hair loss by the age of 40 (stock image)

Although going bald is more common in men, 40 per cent of women have visible hair loss by the age of 40.

So is there any way of telling if your wispy summer hair is the start of something more long-term – or a sign of something sinister?

And, more importantly, can you do anything about it?

HAIR LOSS ISN’T JUST DOWN TO YOUR GENES

At 62, I’m lucky enough to still have a good head of hair. People often put their own situation down to genetics – genes we inherit from both our parents, not just our mother, as is often claimed.

So is hair loss simply fate, written into our DNA? To find out, I had my genes tested by commercial company 23andme.

HOW TO KEEP YOUR CROWNING GLORY

Make sure that you eat a Mediterranean diet rich in iron, Vitamin D and high-quality protein such as fish. Your hair (as well as your heart) will thank you. Vegans and women who have heavy periods should take particular care to ensure they are getting enough B vitamins and iron, either in their diet or by taking supplements.

Shampoo your hair too frequently, particularly if it is dry or brittle. Conditioner can help prevent breakage that can lead to thinning hair.

Its kits are available online and cost about £150. You get a little test tube and a special cottonbud, which you use to swab the inside your cheek. You then put the cottonbud back in the test tube and post it back to the firm. A week or so later, you get the results outlining the risks of a whole raft of conditions and ailments. They told me: ‘Michael, the combination of your genetics and other factors mean you have a 50 per cent chance of experiencing hair loss or thinning before the age of 40.’

So have I dodged a bullet? Well, yes and no. Just because you have a certain gene, it doesn’t mean it will ever ‘switch on’.

Diet, lifestyle and our general health play a big role in gene expression. Theoretically, factors that cause temporary hair loss, such as diet, stress and medication, could switch on baldness genes that lead to a more permanent problem.

MEDICATION HELPS – BUT IT’S NOT A CURE

You can, of course, accept hair loss. One recent study found that bald men are often thought to be more confident and attractive by other people. Alternatively, you could buy a wig, or if you have lots of money you could opt for a hair transplant as footballer Wayne Rooney did. This involves transplanting hair, one follicle at a time, from another part of your head, and will cost up to £7,000.

Then there is the option of medication. At the moment there are only two drugs that have been properly tested and shown to be both safe and effective but they are not available on the NHS.

The most widely used drug is minoxidil, also known as Regaine, which is a liquid or foam that you rub on your head.

It was originally developed to treat high blood pressure, but patients soon began reporting unexpected hair growth. The evidence is that about 40 per cent of both men and women who are going bald see significant regrowth of hair over the course of the first six months of using it.

It can’t work miracles – rather, it is thought to slow the rate of hair loss rather than cause hair to regrow. Once a follicle has died, it can’t be resurrected.

But there are few side effects, and it’s available over the counter, so many doctors I’ve spoken to say it’s worth a go. The downsides are it’s expensive, at about £30 for a one-month supply, and the foam has to be used indefinitely.

The other drug that has been shown to be effective is finasteride. It’s prescription-only and used to treat problems of the prostate but can also halt hair loss.

Like minoxidil, finasteride slows hair loss in about 40 per cent of men. However, it also causes side effects – some men have reported depression and erectile dysfunction. In women, it actually makes hair fall out, due to its specific hormonal action.

There are new drugs in the pipeline, including stem-cell treatments that can actually ‘wake up’ dormant follicles. But this is a way off. In the meantime, follow my checklist in the panel, left.