Tis the season to be jolly, and that, of course, means eating and drinking far too much.

Most of us will happily wolf down turkey, Brussels sprouts, mince pies and pudding on Christmas Day without a second thought… until New Year’s Day, when we notice new wobbly bits and decide that extra portion of pigs in blankets was not such a good idea.

But there are millions of people who won’t be able to eat with quite such abandon; those with hyper-sensitive guts. According to studies, about 15 million Britons suffer digestive symptoms regularly, with one in five diagnosed with the most common gut disorder: irritable bowel syndrome, or IBS.

There are millions of people who won’t be able to eat with quite such abandon; those with hyper-sensitive guts. According to studies, about 15 million Britons suffer digestive symptoms regularly, with one in five diagnosed with the most common gut disorder: irritable bowel syndrome, or IBS

For many, the condition can prove debilitating, with sufferers plagued by symptoms including stomach cramp, bloating and either diarrhoea or constipation.

For reasons often unknown, food passes through the digestive system and into the bowel either slowly, or too quickly. This is usually coupled with spasms in the bowel, causing sudden urges to rush to the toilet.

To learn more about IBS, I have travelled to the heart of cutting-edge gut research: Australia. As I write, I am in the process of collecting evidence for a new film in which I will reveal the secrets to stopping IBS in its tracks. Unsurprisingly, many of these lie in the foods we do – or do not – eat. But since the film is not yet released, here is a sneak preview of the most intriguing findings.

The madcap scientist on a mission to beat IBS

One of my all-time heroes is Professor Barry Marshall, from the University of Western Australia, whom I first met more than 20 years ago. He is famed for his somewhat eccentric research.

When I first met him, he’d just infected himself with a mysterious bacteria called Helicobacter Pylori in a bid to convince a sceptical medical profession that they caused stomach ulcers.

He was right, of course. Within days of swallowing the dangerous microbes, he developed early signs of a stomach ulcer, which he then cured with antibiotics.

Prof Marshall and his colleague Robin Warren cured millions and were awarded the Nobel Prize for Medicine for this discovery.

So I was delighted when I heard that Barry was working on some new gut-related ideas and grabbed the opportunity to meet him as soon as I landed Down Under.

His new mission? To identify IBS and other common gut disorders. The condition is notoriously difficult to diagnose and there is no clear-cut diagnostic test.

Patients are instead required to keep a detailed food diary of potential triggers, and may need to have blood tests or have stool samples analysed to rule out more serious gut conditions such as coeliac disease.

But Prof Marshall has developed a novel diagnostic test, and it seems to really work. His approach is not based on blood tests or invasive cameras. It simply involves, as Marshall puts it, ‘listening to the rumblings and grumblings of people’s guts’.

The equipment involves a belt that is strapped to the patients’ stomach, which encases a small, sensitive microphone. An in-built recorder feeds back to an artificial intelligence system that calls on millions of different stomach sounds to distinguish normal grumbles from those indicating poor digestion. People suffering from IBS experience unusually strong stomach contractions that produce a specific noise.

In a recent study, Prof Marshall’s machine was shown to tally up with doctors’ diagnosis of IBS in more than 90 per cent of cases. He hopes to bring his device to GPs globally in the coming years.

Veg may cause pain… but chocolate eases it

The Australians are also responsible for discovering the most effective known treatment for IBS, administered to millions worldwide. It is a dietary intervention known as the ‘low Fodmap diet’ and was developed in the 1990s by Dr Emma Halmos and her team of dieticians at the University of Monash in Melbourne. The diet has since soared in popularity among those with chronic digestive problems, reducing symptoms by up to 70 per cent – more than any drug treatment. It is recommended by the NHS and the British Dietetic Association.

Fodmap stands for Fermentable Oligosaccharides, Disaccharides, Monosaccharides and Polyols. These are scientific names for sugars or carbohydrates in some foods, which are poorly absorbed by your body.

These end up in the large intestine where they are gobbled up by trillions of hungry bacteria. As Dr Halmos explains: ‘If you are someone who has healthy guts, eating foods that are rich in Fodmaps is good for you. They are a healthy form of carbohydrate as they contain bowel-friendly fibre. But if your guts are inflamed, the microbes will turn the Fodmap foods into increased amounts of gas, causing pain and bloating.’ 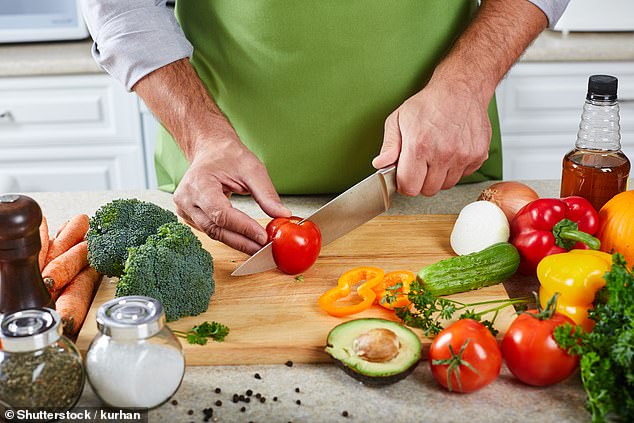 Red and white meat (including turkey), dark chocolate and maple syrup are allowed; but steer clear of apples, cauliflower or green peas. You can eat walnuts, but not pistachios. Aubergines are fine, but not asparagus. Garlic, onions, blackberries, mushrooms and, of course, sprouts, are also high in Fodmaps – for a full list, visit monashfodmap.com

Dr Halmos also explains that Fodmap foods can have a laxative effect for those with sensitive guts. This is because they absorb water as they digest, making stools larger and softer and increasing the speed at which they move through the bowel.

The diet involves cutting out some of these foods until symptoms reduce. The list of foods to avoid may seem surprising.

Red and white meat (including turkey), dark chocolate and maple syrup are allowed; but steer clear of apples, cauliflower or green peas. You can eat walnuts, but not pistachios. Aubergines are fine, but not asparagus. Garlic, onions, blackberries, mushrooms and, of course, sprouts, are also high in Fodmaps – for a full list, visit monashfodmap.com.

After a few weeks, inflammation reduces and the gut relaxes, meaning foods can gradually be reintroduced one by one. This stage is crucial as Fodmap foods are essential for long-term health and it is unlikely you will be sensitive to all of them.

Reintroduce each food weeks apart from others and notice which is the most problematic. If you remain symptom-free for at least three days after eating a Fodmap food, you can move on to the next reintroduction. It sounds a little bit crazy, but it has a lot of good science behind it.

Adopting the full Fodmap diet should be done with the guidance of a GP and dietician – restricting your diet hastily could leave you with serious vitamin deficiencies. Nevertheless, it is useful to bear some of the potentially problematic foods in mind – especially when it comes to piling up your plate on Christmas Day.

In February and March, I will be doing my first live tour, visiting theatres around the UK. To find out more, visit my website at michaelmosley.co.uk/live.