DR MICHAEL MOSLEY: How I unleashed my inner extrovert – and you can too!

Most people look forward to the Christmas party season. It’s a rare chance to socialise outside the confines of a stress-filled office – with plenty of bubbles to sip, and mince pies to nibble. But not everyone.

I don’t go to many parties. And when I do, I don’t stay for long.

You see, I’m an introvert, which means, while I am not shy, I am not outgoing either.

Spending a lot of time with others – particularly those I don’t know – can be very draining. It’s not that I don’t enjoy parties or chatting to people, but sometimes it can all feel a little overwhelming.

So I was pleased to learn, from the results of a new survey, that I am not alone: more than half of Britons describe themselves as ‘reserved’ or ‘shy, and only a third say they’re ‘outgoing’, according to the YouGov poll of over 3,000 adults.

My wife Clare is much more of an extrovert and often has to be dragged away from parties. We introverts need time on our own to recharge our batteries.

The actress Audrey Hepburn summed it up when she said: ‘I don’t want to be alone, but I do want to be left alone.’

There are pros and cons to being an introvert. Although extroverts tend to be happier, they are also more likely to become teenage delinquents. Extroverts do well in jobs like sales, while introverts do better academically.

So what makes me an introvert, and others, like my wife Clare, an extrovert? And is there anything we can do to change it?

It’s all down to different wiring in the brain

People are often surprised when I tell them I am an introvert. They ask: ‘How can you present television programmes or stand on a stage in front of huge crowds of people?’

Well, it’s not the case that we introverts can’t get out there, face the world and perform, it’s simply that we find it much more of an effort than extroverts do.

Why? It seems that our brains are wired differently.

In 1989, US psychologists from Harvard University showed this in a landmark study. A series of experiments was carried out on hundreds of four-month-old babies. They were played recordings of loud noises, including balloons popping, and cotton buds soaked in alcohol were waved in front of their noses. Some of the babies cried and waved their arms and legs around, as expected, but others hardly responded at all.

A fifth of them, who were the highest responders, were coined ‘high-reactives’, while the most placid were labelled as ‘low-reactives’. The children were then followed way into their teenage years, and tested on various personality measures every few years. Surprisingly enough, the ‘high-reactive’ children were most likely to turn into quiet, serious-minded, introverted teenagers.

The ‘low-reactives’ would go on to become bold, sociable and outgoing extroverts.

The researchers concluded that introverts need far less outside stimulation to provoke a reaction than extroverts do.

This explains why I would rather have a glass of wine with a friend in a quiet corner than go to a noisy bar with lots of others.

I sometimes envy my more extrovert friends, who laugh easily and talk noisily and who are great fun to be around, but I realise now that I am not wired that way.

Meanwhile there are clever things you can do to tap into your inner extrovert.

It’s hard… but fake it till you make it

While an introvert cannot magic themselves into an extrovert, they can fake it for a while. I can give you a personal example of this.

When I started out as a television presenter I found it very challenging, even though there was an audience of only three – the camera, the sound engineer and the director.

But it forced me to push myself out of my comfort zone, in other words, to ‘fake it until I made it’.

The first time I performed live in front of a large crowd I was similarly nervous. But the production team paired me up with an experienced and wildly extrovert co-host – and she got me through the early performances. 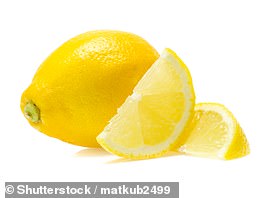 This unique introversion test was first devised in the 1960s by a German psychologist called Hans Eysenck and his wife Sybil.

Since introverts are more sensitive to external stimuli than extroverts, Eysenck guessed they should produce more saliva after drinking acidic, tangy lemon juice.

Participants in his study drank a few drops of lemon juice and the amount of resulting saliva was measured using a ball of cotton wool – the heavier the ball, the more saliva had been produced.

But there’s a far simpler approach – using a sheet of A4 paper and a lemon. Lick the paper continuously, lengthways, from one end of the paper to the other, until you run out of saliva and your tongue starts to stick. Stop and mark this point using a pen.

Next, squeeze three to four drops of lemon juice on to your tongue and repeat the licking exercise on another sheet of paper.

How much further can you go before you tongue dries out? In my case, it would seem Eysenck’s prediction was correct: I went three times longer after applying the lemon juice.

My wife, Clare, the extrovert, went only twice as far.

And now, I’m absolutely fine. In fact, I even look forward to it.

Aside from an obvious growth in confidence, research shows that just ‘acting’ extroverted could bring about benefits for your mental health.

In a recent study, more than 100 US students – a mixture of introverts and extroverts – were asked to act like extroverts for a week, then to spend a week acting as introverts. As extroverts, they were told to be as talkative, assertive, and spontaneous as possible.

The following week, as introverts, they had to be as quiet and reserved as they could manage.

At each stage of the experiment they underwent a battery of psychological tests.

According to the results of this study, extroversion seemed to be a healthier trait.

The students scored higher on every measure of wellbeing when they were pretending to be extroverts, and worse when they were acting like introverts.

Sonja Lyubomirsky, the psychologist who ran the experiment, was surprised by the strength of the effect.

She said: ‘Manipulating personality-relevant behaviour may be easier than previously thought, and the effects can be surprisingly powerful.’

One of my top tips for bring out your inner extrovert is to have a subject that you can speak passionately about.

For me, it’s spreading the message of how to eat well, lose weight and reverse type 2 diabetes. The importance of the subject makes the psychological effort required to get up on stage worthwhile.

Alternatively, I have a few practical tips to help you work with your introversion this festive season, rather than fight it.

l Beat the crowds and get to the Christmas party early, and don’t be embarrassed if you want to leave early. Remember – it’s just how you’re wired.

l Join a local group who share your passions – I am a happy member of an all-male book club, for instance.

l If you find noise at work distracting – introverts often do – buy some headphones and listen to classical music or white noise to block out the distractions.

But most of all, celebrate the fact that you are different.

As Albert Einstein, himself an extreme introvert, once said: ‘A quiet life stimulates the creative mind.’