Over the past month, I’ve mentioned a few times that our best hope, and perhaps the only way out of this pandemic, will be by creating a safe and effective vaccine. Only then will the world be able to get back to normal.

And, in fact, a couple of weeks ago, just before the lockdown began, I was busy filming a special BBC Horizon documentary looking at this very subject.

We were lucky enough to be invited to St Mary’s Hospital in Paddington, West London, to meet a team from Imperial College, one of several groups around the world working on finding a jab that could protect people from Covid-19.

What is potentially so exciting about the Imperial approach is that if everything goes right – and that is a big if – the team could be in a position to produce up to five million doses of the vaccine by the end of this year. That will be enough to protect the more vulnerable against that much-talked-about – and feared – potential second wave of infections.

team from Imperial College, one of several groups around the world working on finding a jab that could protect people from Covid-19

Professor Robin Shattock, the man heading the research at Imperial, has been working on vaccines for decades. When he first heard about the outbreak of a novel virus in China, he assumed that, like previous outbreaks, it would either be contained or fizzle out. ‘We have seen a number of small outbreaks before and we thought this might be one of those,’ he says, ‘although we have always been aware in the scientific community that a pandemic might very well occur.’

However, it soon became clear that this outbreak was not going to be stopped. A critical turning point for Prof Shattock and his team was the publication by Chinese scientists on January 10 of the virus’s genome – its genetic blueprint.

This was like publishing the blueprint needed to create, from scratch, a complete virus. It was a hugely important step that galvanised researchers around the world. Starting in late January, with the information that had been shared by the Chinese scientists, Prof Shattock’s team was able, in just a few weeks, to create a prototype.

The way that a virus replicates is by getting inside your cells and then hijacking their machinery to produce lots of copies of itself.

It then bursts out of the cell and searches for other cells to infect. The immune system stops this happening by attacking the viruses before they get into your cells, or by killing the infected cells before the viruses can spread.

But to do that, your immune system first has to recognise that a new, dangerous virus is on the loose. And when it has done that, it has to be ready to attack it vigorously. That is where a vaccine comes in. 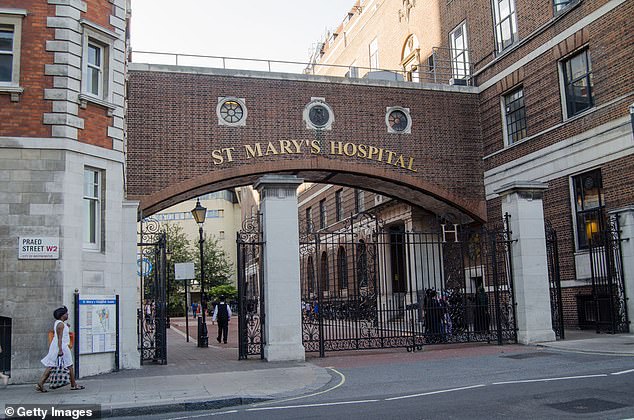 The team, which met at St Mary’s Hospital in Paddington, could be in a position to produce up to five million doses of the vaccine

Traditionally, vaccines comprise a killed or weakened strain of the virus you want to immunise against – or a fragment of that virus. This fools the body’s immune system into thinking it is being attacked, when all it is really doing is responding to a mock attack.

Should the body get attacked for real, the immune system will already be primed to defend it. I say ‘traditionally’, because the approach being developed by Prof Shattock and others is very different. Instead of using bits of the virus as the basis of their vaccine, they use short stretches of genetic material which are grown inside a lab and are wholly artificial.

Once injected, it should be able to provoke a powerful immune reaction without the risk of an infection. These so-called RNA vaccines are so new that none has yet been approved for medical use. The short sections of genetic code in the team’s experimental vaccine are the ones the virus uses to create the club-shaped spikes on its surface.

The Imperial team first injected it into mice. So what happened? ‘We saw a massive antibody response within two weeks of the injection,’ says Prof Shattock. ‘That was actually surprising. We thought we would get a good response but not quite that big or that quickly.’

I want to emphasise just how remarkable this is. They have managed to compress what would ordinarily take about three years – creating a vaccine and testing it on mice – into just three weeks.

Having shown that the vaccine could produce an immune response to coronavirus in mice, the next step has been to test it on monkeys, which are much more closely related to us than mice are. Unlike mice, they are also vulnerable to Covid-19. 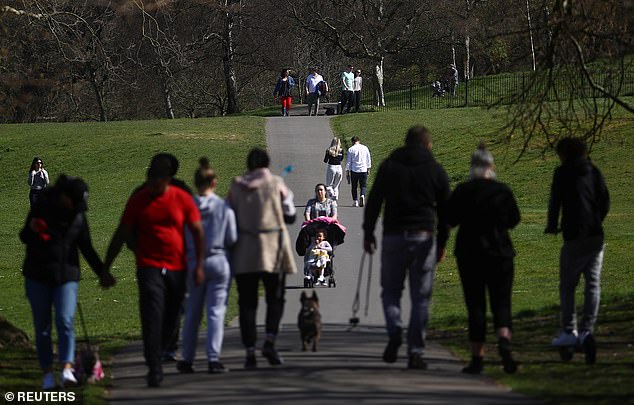 Despite persistent pleas from ministers to stay at home and ensure social distancing, people still flocked to London’s Greenwich Park, pictured, on Saturday

Two weeks ago, a group of monkeys were given a shot of the novel vaccine, and in a few more weeks these monkeys will be exposed to the coronavirus.

The scientists will learn from this whether the vaccine has protected them. If it seems to be safe and effective in monkeys, the next stage will be a small trial in humans.

The Imperial approach is just one of many currently in the running around the world.

Another British team working flat-out on developing a vaccine is based at the Oxford Vaccine Centre. Last week, it started looking for more than 500 human volunteers to take part in a trial.

Last week I wrote that two of my sons – Jack, 27, and Daniel, 25 – had both come down with Covid-19. They had coughs, fever, muscle aches, and had lost their sense of smell.

I’m delighted to say they have now recovered, apart from the sense of smell, which is only slowly coming back.

Loss of smell and taste seems to be surprisingly common in people with the virus. In Germany, more than two-thirds of infected patients reported a loss of smell. 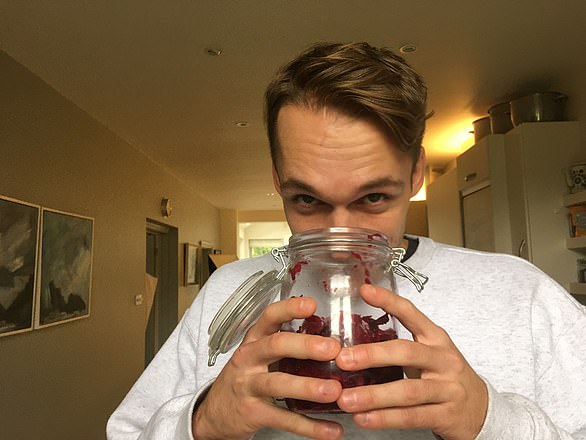 Dan Mosley, who came down with the virus last month, smells some sauerkraut to test his senses

It seems that the virus causes inflammation in your olfactory nerves, which provide you with your sense of smell.

Once the virus has been defeated, smell normally returns within days or possibly weeks. Experts warn that people who go to their doctor with the problem, called anosmia, are often given a steroid to reduce inflammation.

However, if they have the virus, this could be dangerous because steroids can suppress your immune system and may make an infection much worse.