DR MICHAEL MOSLEY: They insert WHAT? Into WHERE? The weirdest ever tummy trouble cure

One of the most exciting and rapidly advancing areas of modern medical science has been the study of the gut, or rather the creatures that live inside our gut.

Known as the microbiome, the two to three pounds of fungi, bacteria and viruses in our large intestine form an eco-system that is as complex as a rainforest.

We are just beginning to learn quite how important this army of microbes is when it comes to influencing our mood, weight and immune system. Because our microbiome is thought to be so important to our physical and mental health, there has been a huge amount of research into the best ways to maintain and improve it.

The simplest thing you can do to improve yours is to do more exercise and change what you eat.

One of the most exciting and rapidly advancing areas of modern medical science has been the study of the gut, or rather the creatures that live inside our gut

Ever since I started researching my recent book, The Clever Guts Diet, I have been eating far more prebiotics – foods rich in fibre that feed the ‘good’ bacteria in my gut – as well as probiotics.

These are fermented foods like yogurt and sauerkraut, which contain lots of ‘good’ bacteria.

But one of the most radical ways to change your microbiome, and which I haven’t yet tried, is by having what is known as a faecal microbial transplant, or FMT.

THE STRANGEST TRANSPLANT YOU’VE EVER HEARD OF

I am warning you now that the procedure I’m about to describe sounds bizarre and possibly distasteful. But I want to tell you about it because it might just turn out to be lifesaving for many people.

Under FMT, doctors collect faeces from a healthy donor and then transplant them into the person they want to treat. The first, and so far most effective, use of FMT has been to treat a condition where the gut becomes overwhelmed by a type of bacteria known as Clostridium difficile, or C.diff.

This is a very common infection, affecting more than 14,000 people every year, and it often results in a lengthy stay in hospital. Symptoms include severe diarrhoea, fever and abdominal pain, which can go on for months, if not years.

Not only is this infection disabling, it can be lethal. In the UK, C.diff infection kills more than 1,600 people every year.

So how do you get it? Well, C.diff is one of those bacteria that may well be hanging around in your guts right now, doing little harm. That is because it is being kept in its place by your ‘good’ bacteria. 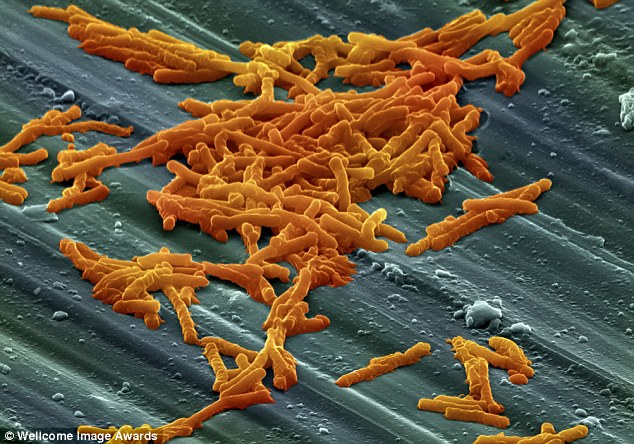 Under faecal microbial transplant, doctors collect faeces from a healthy donor and then transplant them into the person they want to treat. The first, and so far most effective, use of FMT has been to treat a condition where the gut becomes overwhelmed by a type of bacteria known as Clostridium difficile (file image), or C.diff

Then, perhaps, you get a minor infection and your doctor prescribes a broad-spectrum antibiotic.

This wipes out many of your helpful gut bacteria, but leaves C.diff intact, because it is tough and often very resistant to antibiotics. With its rivals destroyed, the bad guy can seize the opportunity to take over.

It is a bit like the invasion of Iraq – once the allies had destroyed Saddam, they created the circumstances under which IS could thrive.

Once C.diff is in charge, it is incredibly hard to get rid of.

Standard treatments, which include yet more antibiotics, are often ineffectual. But in recent years, it has emerged that a good chance of a cure could come from FMT, which involves parachuting in huge number of someone else’s healthy gut microbes.

In other words, a faecal transplant. Potential donors are screened for any nasty bugs – as are the samples – and the procedure has been found in studies to be safe. The transplant can be done via a tube passed through the nose and into the stomach, but there is a higher success rate if it is done via the rectum.

I have seen one FMT procedure performed. The whole thing took less than 30 minutes and the results were spectacular.

YEARS OF PAIN ENDED AFTER ONE PROCEDURE

Rose Melling had spent many years in pain, having to rush to the bathroom at all hours of day and night. ‘It can be excruciating,’ she told me.

‘Sometimes it is like being eaten alive.’ There had been countless failed attempts to treat her with antibiotics. Yet within hours of having a faecal transplant, her gut was back to normal and she was able to get on with her life.

There have been numerous trials showing that a faecal transplant can cure 90 per cent of people with C.diff who have failed every other treatment. Because it has been so successful in treating C.diff, FMT is now being tried out on other conditions, from the inflammatory bowel disease Crohn’s to type 2 diabetes.

So far, success rates in treating these other conditions with FMT have been modest, but that could be because the donor samples have not always been of high enough quality.

When Dr Justin O’Sullivan, of the University of Auckland, began looking back at trials of FMT, he noticed that some patients had done much better than others.

As he dug into the data, he realised that this was largely because they had received a faecal transplant from someone who Dr O’Sullivan describes as a ‘super donor’.

In fact, if you were lucky enough to get a transplant from a super donor, you were twice as likely to see significant improvements in your symptoms, whether they be reduced inflammation in the gut or better blood sugar control.

What makes a super donor? According to Dr O’Sullivan, their stools tend to have high levels of ‘keystone species’.

These are bacteria and viruses that work together to produce chemicals which help fight a particular disease.

If you have inflammatory bowel disease, for example, you will want to have a transplant from a donor whose faeces are rich in the sort of bacteria that produce butyrate, a chemical that dampens down inflammation.

Dr O’Sullivan thinks that identifying the right super donors for the right conditions could make a huge difference, not just to treating diseases of the gut, but disease which we know are linked to an abnormal microbiome.

These include conditions such as Alzheimer’s, multiple sclerosis and asthma, although we’re a way off any proof of this.

At the moment other countries, especially the US, are much better at providing FMT services than the UK.

Even though up to ten per cent of patients who get a C.diff infection die as result of the infection – the elderly and those with a weakened immune system are most at risk – this treatment is not routinely available on the NHS, with only a handful of hospitals providing the service.

I am optimistic that, as more evidence emerges, that will change and that FMT has a bright future.

I have been on your Fast 800 diet and I’ve lost 1st 8 lb. While I feel better and fitter in myself, I am always freezing cold. Is this normal?

When I first put myself on the 5:2 diet and lost 20 lb, I also found that I was colder than usual.

Much to my wife’s delight, I even turned up the central heating.

You are probably feeling colder because when you lose fat you lose a bit of insulation, but there are a couple of other things that could be contributing to the situation.

First of all, your body uses a lot of energy keeping you warm, and when you lose weight your body may try to conserve calories by turning down your internal thermostat. This should pass.

Secondly, cold hands and feet can suggest you may be lacking a bit of iron. The recipes in the Fast 800 book are designed to give you all essential nutrients, but taking a multi-vitamin may help.