From a charmer to a lost puppy: The three types of men you must avoid dating – and what to do if you’re in a relationship with one of them

Many singles often ignore the early warning signs of a potentially bad relationship.

But to avoid getting your heart broken again, Sydney sexologist Dr Nikki Goldstein has revealed the three different men we have all dated, which includes the charmer, lost puppy and needy.

The relationship expert said they’re the men you will most likely come across at least once in our lives – as she reveals her tips on how to navigate the obstacles when dating them.

According to Australian relationship expert Dr Nikki Goldstein every woman will come across charmer, lost puppy or a needy man

What’s the type of man you have dated?

Dr Goldstein said one of the three men we’ll date is the charmer. They are often strong, assertive, good looking and the alpha male of the group.

But underneath all of this, there are certain moments where he will reveal his sly side.

‘[This is the] guy who will tell you everything you need and want to hear and do it while glaring deep into your eyes,’ she said.

‘These guys might tell you what you want to hear, promise you a future, show you signs of commitment, but keep your eyes open,’ Dr Goldstein warned.

‘Are they following through on these statements? Are they doing things that show you they are serious or are they just uttering these words?’

Dr Goldstein said it’s not always easy to pay attention to these signs as we can all get lost in lust and signs of commitment and a future, but you need to have a moment to step away and see certain scenarios for what they are.

A man who’s a charmer might be telling you one thing, but you need to be wise enough to see if they are following through on their words. 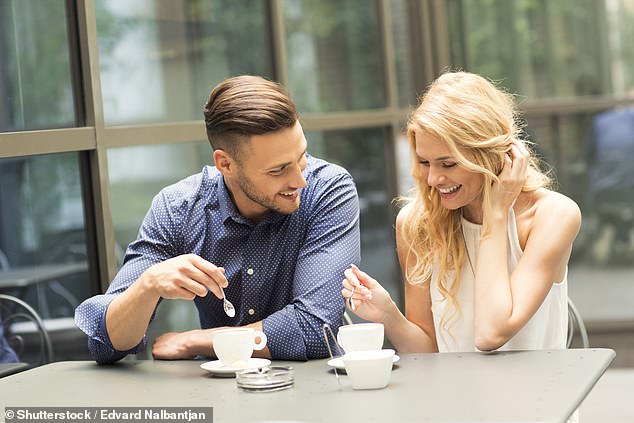 Dr Goldstein explained that one of the three men we’ll date is the charmer. They are often strong, assertive, good looking and the alpha male of the group

This kind of man will seem goofy and sweet but at the end of the day they’re not 100 per cent sure of what they’re doing.

They occasionally sabotage their own chances at starting a relationship because they tend to fall in love with other women without knowing them, while ignoring someone who was really into him.

And when things fail, he comes crawling back, begging for forgiveness.

‘You can’t rescue the lost puppy dog. It might be tempting, but if the puppy is lost, there is nothing you can do,’ she said.

‘You can make your intentions known and be honest with him, but if they can’t do it in return, it’s time to take your self-respect and move on.’

Dr Goldstein said you might always have a ‘soft spot’ for him, but it will ‘come to a point where if he can’t make his mind up, you need to make the decisions for the both of you’.

This is the type of man who not only falls hard and fast but won’t let you out of his sight when he does.

They can sometimes become over protective, demanding and be an unhealthy amount of possessive.

Some women enjoy having a guy cater to their every need whilst others who are more on the independent side find it suffocating.

Dr Goldstein said that your love for the needy man might be overshadowed by how much they smother you.

She said what you need to question is if the smothering dies down, would you still be keen to explore something more?

‘The problem is he might not be able to do that. It could be an all or nothing type of deal as he might just have two modes,’ she said.

‘Some women enjoy having a guy cater to their every need whilst others who are more on the independent side find it suffocating.’

But if you’re an independent woman, this man might not be the right person for you.