Dr Pimple Popper reveals how her life has changed

If you’ve ever been disgusted by the sight of a gruesome cyst being squeezed, then chances are Dr Pimple Popper is to blame.

The YouTube sensation, dubbed the undisputed queen of zit-popping, has shot to fame in recent years for her sickening clips.

And in an exclusive interview with MailOnline, the dermatologist explained how her videos have helped change the attitude towards such stomach-churning clips.

‘It’s become less guilty. People were hiding this issue, but now they are announcing it to the world, they are proud of it.

‘They’ve found other people who have this same joy and they appreciate that and now they know they are normal. It’s absolutely mind-boggling to me.’

If you’ve ever been disgusted by the sight of a gruesome cyst being squeezed, then chances are Dr Pimple Popper is to blame

Her videos, which MailOnline have frequently reported, have amassed nearly two billion views and have brought popaholics ‘out the closet’.

And the Californian-based dermatologist has even landed her own TV show about her grotesque but strangely satisfying pops on TLC.

She has so far had two premieres broadcast on the channel in the US, featuring her tackling a variety of sizable pus-filled lumps and bumps.

‘I happened upon this fascinating phenomenon,’ Dr Pimple Popper said. ‘I didn’t know people enjoyed watching these videos and relaxed to them.

‘People watch them before they go to sleep, watch if they panic or have an anxiety disorder. They feel very cleansing.’

She added that her voice helps put sufferers of dermatillomania – more widely known as skin picking disorder – to sleep.

Speaking about her newfound fame, she described it as ‘crazy’ that people travel from all the corners of the planet to see her. 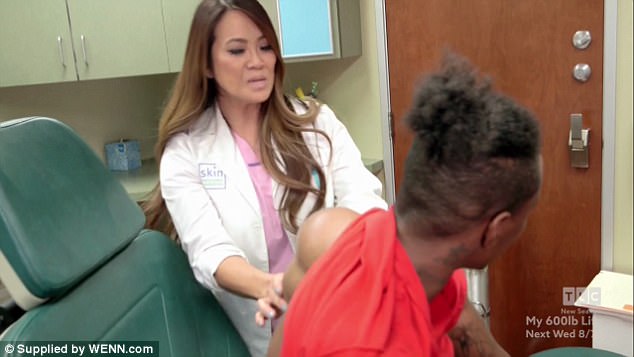 The California-based dermatologist, who has become a YouTube sensation – helped a homeless man in her first TLC episode last month

Dr Pimple Popper told MailOnline: ‘I tell people that I am not a popaholic.

‘I, myself, have been in practice for over a decade and have never felt compelled with a big blackhead or cyst to squeeze it, but now that I have done hundreds and hundreds of them, I would have to say I’m an expert at them.

‘I understand why other people like it, I will tell you that I cannot watch anyone else’s videos.

‘I don’t watch my videos on my own unless I’m editing them, and I cannot watch when another one goes viral.

‘I will get it sent from other people, but it gives me anxiety, my heart starts beating faster and my hands get sweaty. I just can’t watch it.

‘If it’s me doing it, I know it’s sterile, I know it’s clear, I know the person is not in any pain, but me seeing somebody squeezing at a beach with a beer bottle in one hand and squeezing the other gives me a lot of anxiety.’

However, she refused to accept she was a ‘celebrity’ – despite the YouTube sensation having nearly two million fans on Facebook.

Dr Pimple Popper told MailOnline she feels uncomfortable with people recognising her on the street and added: ‘I don’t feel deserving of this adulation.

‘People hear my voice and they recognise me, not see my face but hear me speak and instantly recognise that.

‘I just feel really proud to be inspiring these young groups of people, there needs to be more female surgeons in the world.’

Dr Pimple Popper, who began recording in 2010, admitted she poses with people’s cysts before popping them because she’s a ‘geek’.

Dr Pimple Popper compared watching her videos to that of riding a rollercoaster or watching a scary movie because they boost feel-good chemicals in the brain.

She said: ‘You get this excitement, this euphoria, this endorphin rush and then the resolution.

‘You feel good afterwards, maybe not during, sort of a similar kind of feeling.

Dr Pimple Popper added: ‘I think 2018 is going to be a big year. We have that TLC Special, I have a book coming out and I’m still working.

‘This is bigger than I ever imagined, but I still think there’s room to grow. This TV special is introducing pimple popping to people not on social media.

‘I’m not popped out yet but I can’t do it forever. It is getting harder with all these other commitments, I get little waves of burnout.’

Dr Lee was given her biggest challenge yet – a jaw-dropping 400g fatty lump the size of a bowling ball.

Her clip showed her removing the bulge from the back of a man’s neck, which she describes as ‘a bear of a lipoma’.

She hoped it would come out easily – but the monster growth didn’t want to budge. Eventually she is forced to put down her surgical tools and yank the fatty cells out with her bare hands.

The patient was suffering from a common cyst, known as an epidermoid cyst, which is made up of wet skin cells, giving it a ‘cheesy’ appearance. This is often accompanied by a pungent aroma.

The expert dusts off her scalpel and makes an incision into the skin, before cutting away the ‘sack’ holding the pus inside the cyst.

The unnamed woman visited the dermatologist in an attempt to get to the bottom of her enormous lump.

Dr Lee began the procedure by cutting open her skin with her surgical tools, revealing the orange-coloured growth.

After pulling both openings of the skin away from each other, the growth can be witnessed in its full glory.

Round, wobbling and grey, this is the moment the doctor cuts the ‘big momma’ of cysts out of the back of a woman’s head.

The unnamed woman has already had two cysts removed by the dermatologist, and came back to have the biggest removed from her scalp.

The boiled-egg-sized lump was so big she was forced to wear a hat to hide it.

Round, white and uncannily like an eyeball, this is the revolting moment Dr Pimple Popper drags a marble-sized cyst out of a man’s back.

The unidentified football player ended up lying in the Californian dermatologist’s chair because he has a grape-sized bump on his torso.

As Dr Pimple Popper cut into it, a perfectly round white ball popped out of the surface.