A tradie and his friend have fought back as two alleged home invaders tried to flee.

Dramatic footage of the clash in Keilor, Melbourne, was posted to Facebook on Tuesday after it was captured by a home camera security system.

Two hooded men can be seen dashing through a door, tripping over their feet, as they try to escape a man clad in hi-vis, wielding a sledge hammer.

The man clips one of the accused teens’ buttocks with the stump of the weapon before they attempt to take shelter in a vehicle sitting in the driveway.

The vigilante then pulls one man out of the car as a mate, only wearing underwear, joins the fight to take on the other teenager.

As the clash continues, one of the men is seen smashing the windscreen of the car.

‘Bang! I booted him so hard in the head,’ the hi-vis hero is heard explaining as he watches CCTV of the struggle. 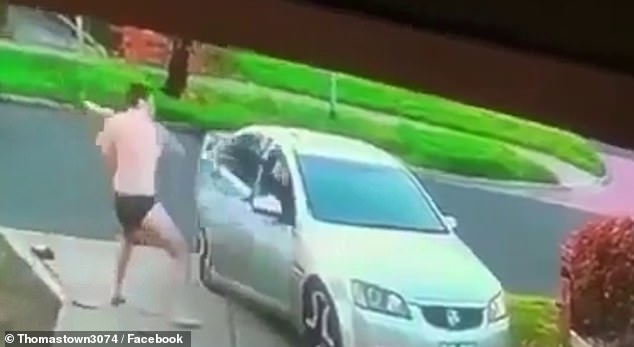 The vigilante then pulls one man out of the car as a mate, only wearing underwear, joins the fight to take on the other teenager

Three teenagers were later arrested and face a string of charges dating from May until the incident in Keilor earlier this month.

A 16-year-old has been charged with car theft, home invasion, burglary and assault.

They are set to face children’s court at a later date and were refused bail.