Dozens of armed officers were forced to smash the window of a car with a machine gun before dragging a man from the driver’s seat in shocking footage.

In the video, officers halted an out-of-control convertible Audi by throwing a spike strip onto the ground during the dramatic arrest in Langston Road in Loughton at around 9.30am on Saturday.

Four people were arrested during the high-speed police chase after marked cars surrounded the driver who swerved into surrounding vehicles to escape.

Police can be heard screaming ‘get your hands up’ at the driver in the clip before one officer uses his gun to smash the window of the car.

Armed police then drag a male from the vehicle as a helicopter can be heard circling overhead.

Metropolitan Police confirmed that two men and two women were arrested in connection with a knife-point robbery following the high-speed police chase.

A spokesperson said: ‘At approximately 09:25hrs on Saturday, 28 September, officers attempted to stop a car in the Enfield area in connection with an ongoing investigation into a knife-point robbery. 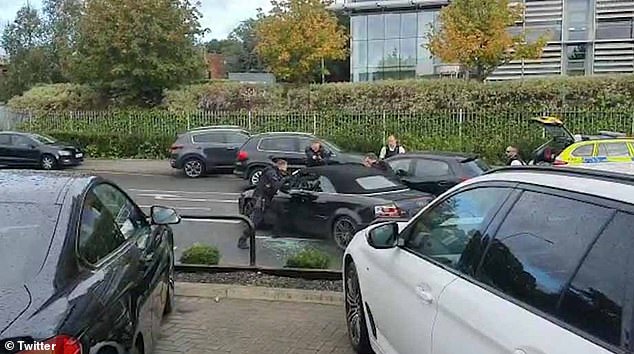 ‘The vehicle failed to stop for police. The suspect car collided with a number of vehicles before being stopped on Langston Road in Chigwell.’

The incident occurred on a residential street near an Aldi supermarket and opposite a BMW and Mini dealership.

The road where the arrest took place has now been closed. 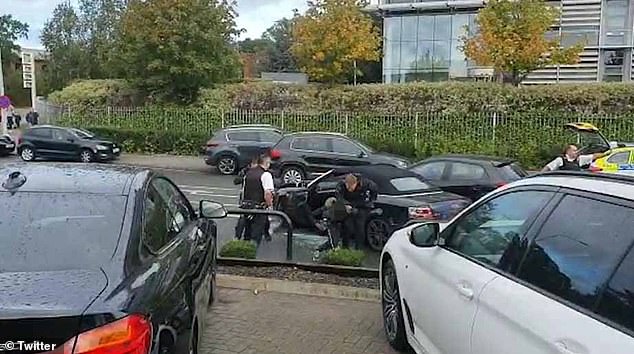