Dramatic moment British Airways flight to Dallas was forced to return to Heathrow after screaming passenger went ‘berserk’ at 20,000ft and had to be restrained by staff

British Airways air crew had to battle for an hour to restrain an unruly passenger who forced the plane to turn around.

Horrified passengers watched on as the crazed man screamed hysterically as staff tried to restrain him on BA flight BA193 from London Heathrow to Dallas.

His antics culminated in him being cuffed to his seat and the plane turning around and going back to Heathrow with the captain opting out of an emergency landing in Glasgow.

Metropolitan Police confirmed to Mail Online that 21-year-old Jeffrey Libby, an American national from Texas, was charged with three counts of common assault, being drunk on board an aircraft, and using threatening, abusive or insulting words towards cabin crew.

He was remanded in custody to appear at Uxbridge Magistrates’ Court on Wednesday, 19 December.

The captain could be heard addressing frightened passengers on Monday, as he stated in a clip caught by one customer that the aircraft was in danger.

As he spoke over the tannoy, his ‘cool and professional’ colleagues along with some customers, restrained the passenger, who was screaming obscenities.

The pilot said: ‘This is the captain. Some of you may have noticed on the route map display the plane appears to have turned around. That is the case.

‘The reason for that is one of the passengers in the cabin has become a danger to the aircraft.

‘Your safety and that of the crew is my priority. The reason for that we are now going to be returning back to Glasgow where we will be offloading the passenger. 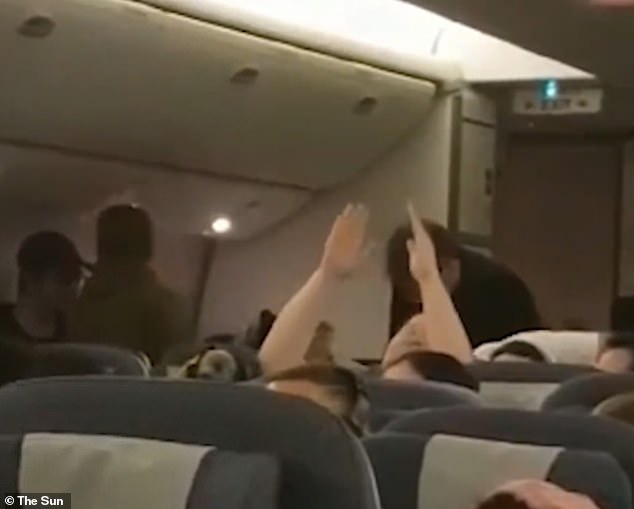 ‘I don’t take these situations lightly. I’m sure you understand that your safety is the utmost priority for British Airways and me as the Captain of this aircraft.

‘The company does know that this has been initiated and we will be doing all we can to get you on the ground and to look after you as best we can.

‘As I say this is for the safety of this aircraft. We will be landing in just over an hour’s time.’

As the man is restrained, some passengers can be seen moving out of harm’s way.

The flight grounded back at Heathrow at 4pm, where police were waiting.

The flight was rescheduled and made it to Dallas later on Monday.

One witness told The Sun: ‘The BA staff were the epitome of cool.

‘It was a really scary situation that you would not wish on anyone, but the crew were totally professional.

‘They managed to calm terrified passengers who were worried for the safety of the plane.’

A British Airways spokesperson said the sort of behaviour the man exhibited would ‘never be tolerated’ and that customers should never ‘suffer from any sort of abuse.’