Dramatic police helicopter footage has captured the moment a driver allegedly sped the wrong way down a highway before catching fire after running over road spikes.

Vision released by Queensland police shows the red Holden Commodore narrowly avoiding a large truck while zipping in and out of oncoming traffic.

The man, 33, was finally arrested after a terrifying police chase through the Gold Coast and charged over three alleged dangerous driving incidents.

Shockingly, the entire ordeal took place while the man was handcuffed to the wheel of the Commodore – after he allegedly assaulted a police officer during a RBT.

Police allege the man was a passenger when his friend allegedly tested positive for drug driving.

The driver allegedly managed to hop into the driver seat and speed away, not before an officer managed to lock one hand to the car.

After a dangerous stretch down the wrong way of the highway, the footage captures the man getting out of his vehicle and demanding another driver to hand over his keys.

The man who handed over his keys told 9NEWS the only reason he gave his keys over were that the man in the Commodore pulled up beeping the horn of his car.

The Commodore driver allegedly claimed he had been in an accident and told the man he would bring his Mazda ute right back.

However, the driver allegedly had no plans of returning the car – speeding off in the ute with police hot on his tail.

Police threw tire spikes on Algester Road at Algester, which the ute then ran over.

The driver lost the rubber from the tire but proceeded to drive, leaving a trail of sparks behind him.

The man drove away from an RBT at the beginning of the pursuit, according to police. Eventually the driver skidded to a stop and officers from at least seven vehicles followed a man and commenced the arrest 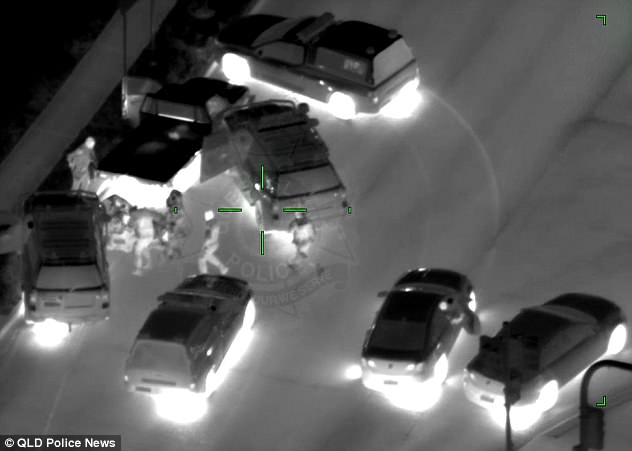 The Bundaberg man was charged with three counts of dangerous driving, two counts each of unlawful use of a motor vehicle and failing to stop a motor vehicle

Eventually the driver skidded to a stop and officers from at least seven vehicles followed him, arresting him at around 7pm at a busy intersection.

The 33-year-old Bundaberg man was charged with three counts of dangerous driving, two counts of unlawful use of a motor vehicle and failing to stop a car.

He was also charged with driving an unlicensed car, stealing, and three counts of seriously assaulting police.

He will appear at the Richlands Magistrates Court April 30. 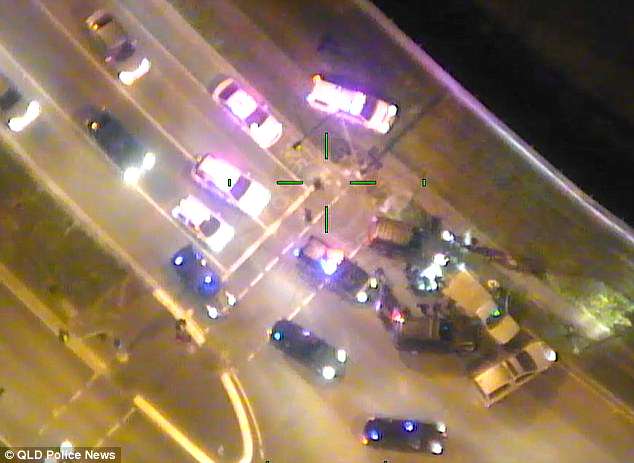