By Gerard Couzens and Charlie Bayliss For Mailonline

Shocking footage has emerged of a British tourist being pinned down by police after allegedly trying to steal a delivery van while drunk – and then crashing it into a parked car.

The man can be heard shouting in English while he is pinned to the ground as passersby look on near the scene in Benidorm.

He was arrested at around 5pm after he allegedly sped off in the Coca-Cola van while wearing his shorts and flip flops after the driver left the keys in the ignition during his delivery.

The truck driver filmed the incident and gave a running commentary as the tourist was apprehended by authorities.

In the video, he is heard saying: ‘This drunk foreigner stole our van and everyone’s looking.

‘We phoned the police and I managed to get him out of the driver’s seat as they arrived.’

A police officer can be heard telling him to be quiet as he holds him down near Benidorm’s Casino Mediterranean.

It is unclear whether he is still in custody but local reports say the man refused to take a breathalyser. No-one was injured.

He was arrested in Benidorm’s Mediterranean Avenue near a hotel called Don Pancho, a short distance from Filipinas Avenue where the delivery truck was taken. 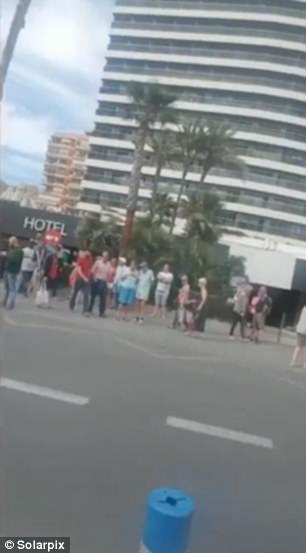 One person said: ‘Something has to be done with Brits like these. They can’t be allowed to do whatever they want just because they bring money.

‘I have lived in London and I can assure you that what they are doing in Benidorm they could never do in London.’

But another added: ‘Not all British people are like this. Many who live in Spain are very nice people.’