Dramatic footage has captured the moment a militant vegan activist clashed with a seafood restaurant owner after accusing his diners of being animal abusers and supporting ‘an animal holocaust’.

Ms Peterson – an Only Fans star who claims to earn $40,000 a month – stood on a table as she and her fellow activists accused customers of being complicit ‘in the largest holocaust in human history’.

‘This is an emergency – the whole ocean is under threat. Fish are ripped from the ocean and brutally murdered,’ she told stunned diners inside the restaurant.

The bearded hotelier accused the 27-year-old of trespassing before approaching her cameraman and escorting him out onto the boardwalk.

‘You’ve been asked to leave. I’ve asked nicely and now it’s time to go – you’re on my property,’ he said.

The cameraman said repeatedly ‘don’t touch me’ as the owner walked directly towards him with his arms raised in an attempt to make the group leave.

The protesters moved out onto a footpath next to the restaurant, where they chanted ‘animal abusers’ and ‘fish feel pain, fish want to live’ while unfurling a banner that urged people to watch the Netflix documentary Seaspiracy.

‘This is all about you – this is about nothing else but you,’ the owner said.

‘No this is about the largest holocaust in history,’ Ms Peterson shouted back.

The group left the restaurant after almost five minutes and constant pleas for them to go home from frustrated diners and staff. 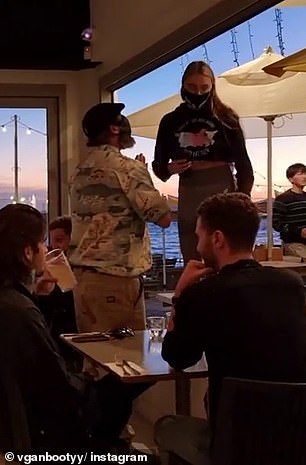 The video emerged after Ms Peterson was slammed for comparing the abduction of four-year-old Cleo Smith to baby cows being taken from their mothers.

The belligerent animal rights extremist accused the Australian public of hypocrisy for celebrating Cleo’s rescue from a locked home in Carnarvon, Western Australia.

The four-year-old was returned to mum Ellie and stepdad Jake Gliddon 18 days after she was kidnapped from a remote campsite during a family holiday.

Ms Peterson claimed abducting a child was no morally different to taking baby animals in the meat and dairy industry. 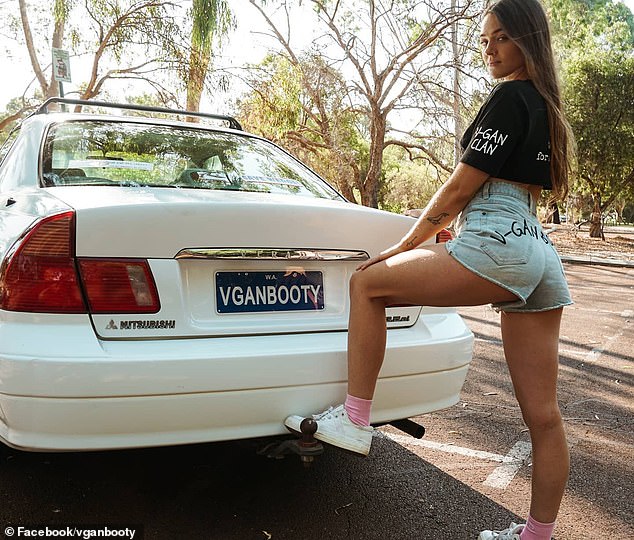 ‘Whilst Australia celebrates the rescue of Cleo… the majority of the nation pay people to steal babies from their mothers and shoot them in the head on dairy farms,’ she captioned an image of a young cow.

‘This is an image of a five-day-old baby awaiting his murder in a slaughterhouse in Tasmania. 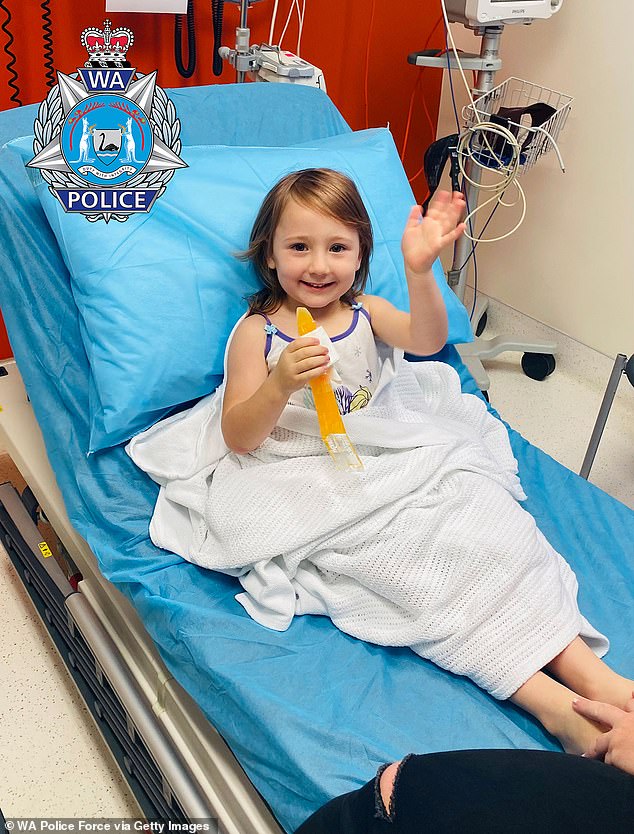 The militant vegan went on to claim people who bought dairy products supported the ‘rape, slavery, abuse, murder and the abduction of babies’.

‘One day this heinous crime towards non humans will be illegal just like it is amongst humans. Be on the right side of history, live vegan.’

Some commenters agreed with the comparison that ‘every mother is a mother’, but even some of her most loyal supporters said she had gone too far. 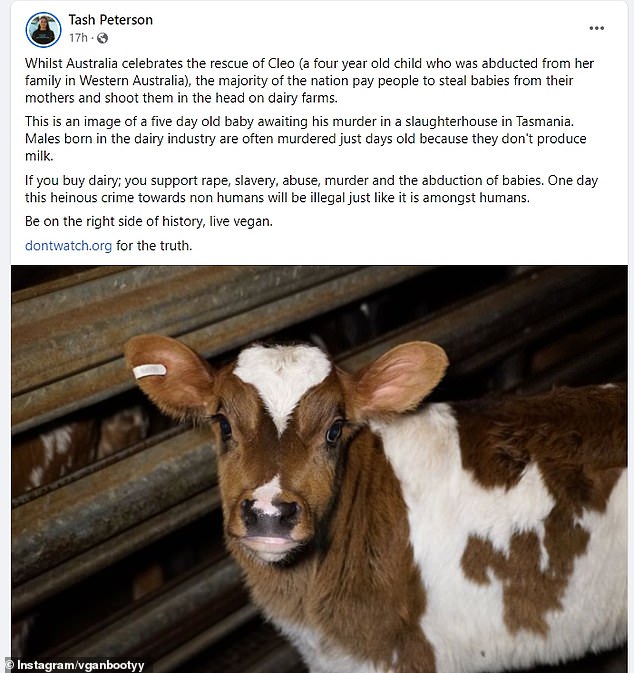 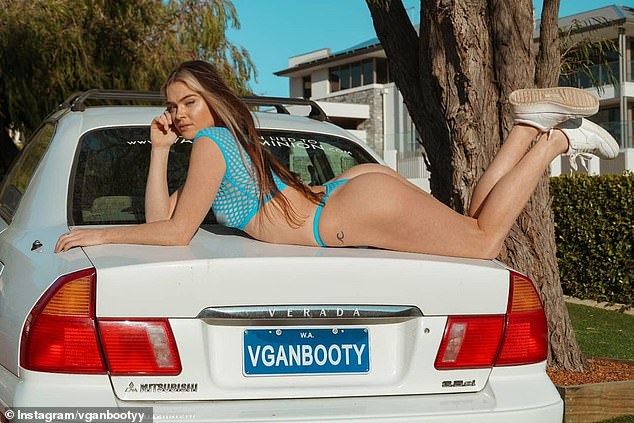 ‘You cannot be serious? The nation is in tears of relief about this precious little girl being found safe and you’re using her already to feed your agenda?’ one wrote.

‘Can count on you to make something as sweet as little Cleo’s story all about you and your ’cause’,’ a second wrote.

‘I have been following you Tash and respected what you do and getting your point out but this is majorly next level and quite frankly wrong!’ another fan commented. 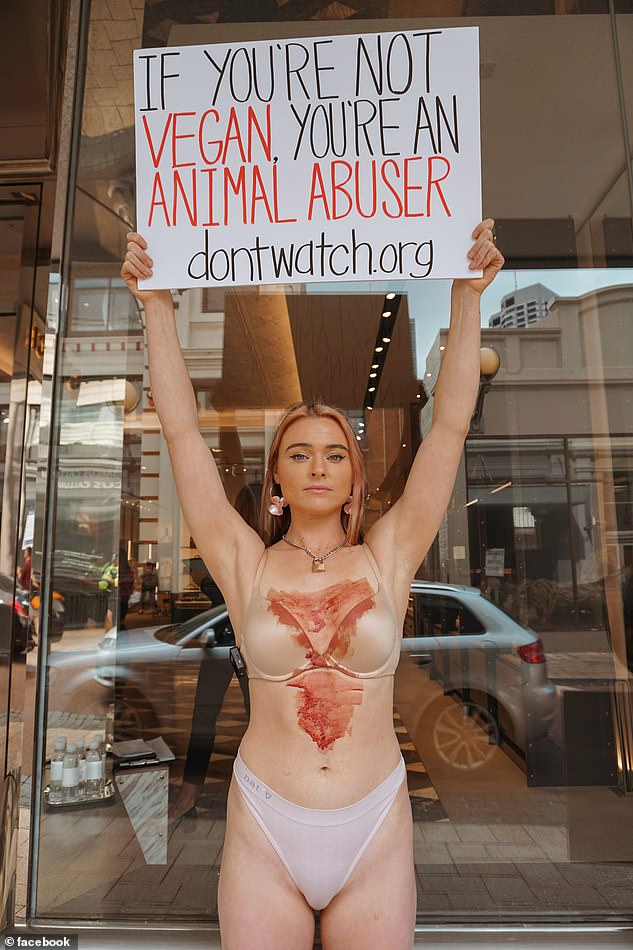 In one of her latest protests the social media influencer marched into the designer store in Perth wearing only a nude G-string, with red paint daubed from her chest down to her crotch

‘This young girl should not be used to gain your ‘likes’ and ‘followers’.’

Despite the online backlash, the controversial plant-based campaigner doubled down on her claims and lashed out at her critics.

‘It’s fascinating witnessing the cognitive dissonance and how challenged people are feeling from a statement that I made which points out the blatant hypocrisy within our society,’ she wrote. 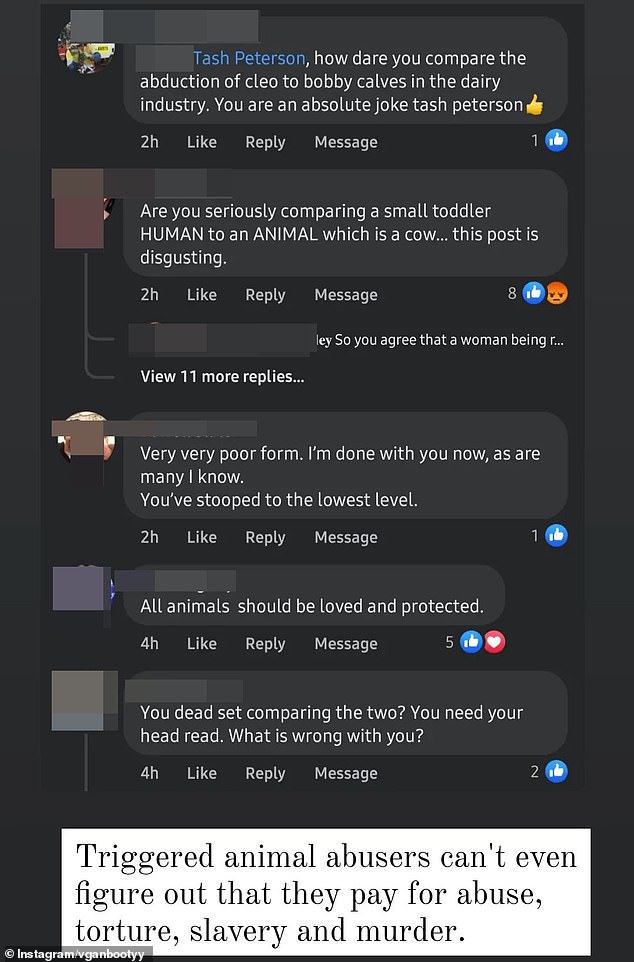 ‘Triggered animal abusers can’t even figure out that they pay for abuse, torture, slavery and murder’ the activist replied to comments slamming the comparison

‘The purpose of my post was to highlight the engrained anthropocentrism and speciesism within our society, it meant no disrespect to Cleo.

‘People are accusing me of being iniquitous and offensive for drawing comparisons between the abduction of a human and the abduction of a non human, with no consideration of the fact that we are all animals who feel pain and suffering.

‘All animals (human and non human) are mothers, fathers, children and babies with families with emotional connections.’

Anthropocentrism is the belief that humans are the only, or primary, holders of moral standing, and are separate from and superior to nature.

Ms Peterson claimed the majority of the people who disagreed with her post were ‘actively paying for people to abduct babies from their mothers’.

She said those who labelled the comparison as distasteful needed a ‘reality check’ and should be outraged by the ‘animal holocaust’ they were contributing to. 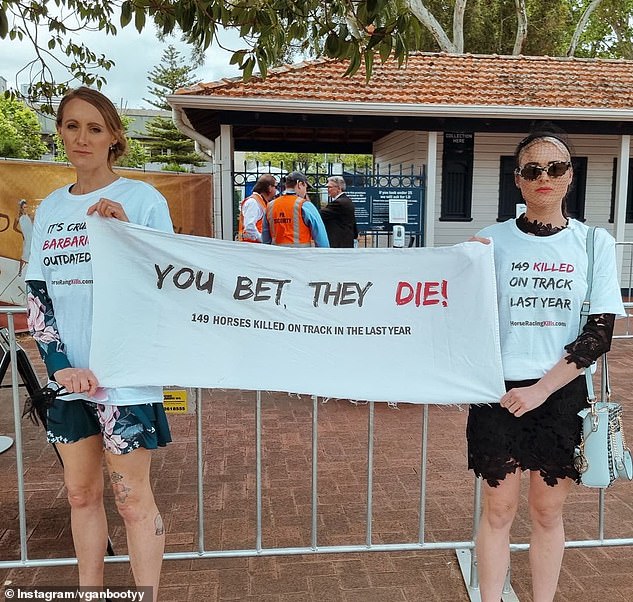 ‘What is abhorrent, barbaric and outright shameful is supporting the dairy industry and other animal industries,’ she concluded.

The 27-year-old has become known for her shock-tactic demonstrations performed in food courts, butchers, meat isles in supermarkets and busy restaurants.

She recently uploaded footage of police escorting her out of the Ascot Racecourse in Perth as she protested horse racing in front of a crowd of bemused punters.

She has also dressed in bloodied aprons and stormed into restaurants and supermarkets like McDonald’s, KFC and Coles.

Vegan protesters armed with fake blood, a megaphone and audio of chickens shrieking in agony swarmed a busy KFC as part of an animal rights protest, before being told ‘no wonder people hate vegans’ by a frustrated diner.

Among the six irate herbivores covering the floor of the Melbourne fast food store with red liquid was Tash Peterson, a glamorous social media influencer who was recently banned from every pub in Western Australia for a string of similar demonstrations.

The 26-year-old animal activist, known as Vegan Booty online, can be seen in a video posted online yelling at diners with a megaphone, accusing them of being complicit in an ‘animal holocaust’.

‘KFC murder six week old babies who are shackled by their feet, electrocuted in a bath of water and have their throat slit,’ she wrote on her social media pages to her army of followers.

‘The world’s longest and largest holocaust in history is happening right now in the meat, dairy and egg industries.’

She went on to say ‘non human animals’ were put in ‘concentration prisons’ where they are ‘raped, abused, tortured and mutilated’.

The vegan activist told confused restaurant-goers sinking their teeth into fried chicken and Zinger burgers that they are ‘animal abusers’. 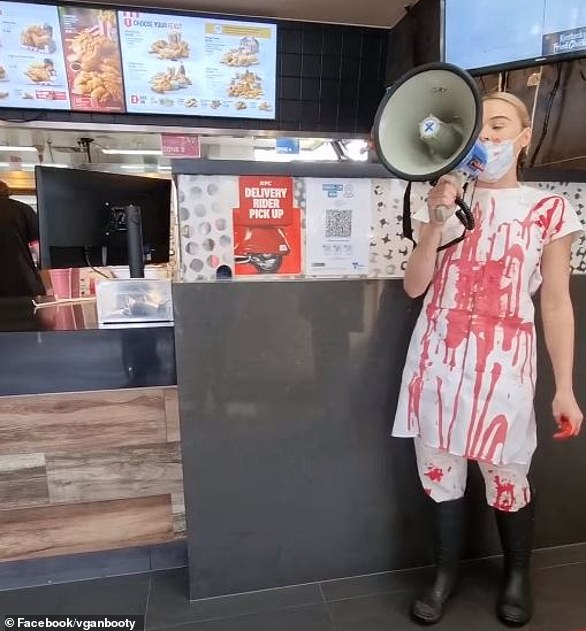 Other members of the group played shocking animal cruelty video on a portable screen.

‘If you are not vegan you are an animal abuser and you are paying for a holocausts. The largest and longest holocaust in history,’ Ms Peterson said.

But her protest was not appreciated by those trying to enjoy their lunch.

‘We are just trying to eat,’ one person replied.