Dramatic moment rock climber Emily Harrington, 33, is rescued after drop down El Capitan in the dark

The is the dramatic moment professional rock climber and adventurer Emily Harrington was rescued after falling from 150 feet point up El Capitan with the only man to free solo the California rock.

Video shows the time immediately after record-breaker Alex Honnold, and other climbers in Yosemite National Park, helped out one of the best climbers in the world after she ‘pin-balled’ down in the dark.

The clip shows emergency responders stabilizing the neck of the 33-year-old who has won five US National Sport Climbing Championships and two North American Championships, as she lies on a stretcher Sunday.

As an online commentator noted, her bloodied neck appeared as if she’d had her throat slit following the dangerous tumble at the start of her ascent up the 3,000-foot mountain.

Harrington replied in hospital: ‘I look like a strangulation victim.’ 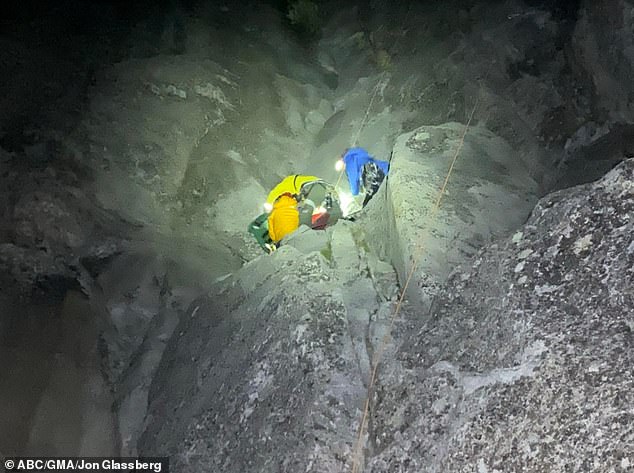 In the video footage recorded by a man who was filming their climb, responders are heard discussing whether to put her neck in a collar first.

They report that she experienced injury to the leg and pain in the lower back area too.

A team additionally tapes up the area surrounding her head, strapping her in underneath her chin where she was left with red bruises and scarring after hitting the rope during the drop.

Extra careful to keep Harrington feeling comfortable, they are heard warning each other to watch where they’re walking as they maneuver around the rocks to lift her out.

As it turns to dawn, helpers are seen lifting her up as the enormity of El Capitan is showcased in the background.

Those helping Yosemite Search and Rescue then wheel her out on one huge tire and when she reaches the emergency vehicle Harrington smiles as a member of the team starts to partially unbuckle the stabilizing gear.

Through the clip the group remains upbeat as they get Harrington to safety.

Even in her hospital bed free of restraints Harrington jokes as she soothes her neck with an ice pack: ‘My braid was digging into my head. I was so upset about it.’ 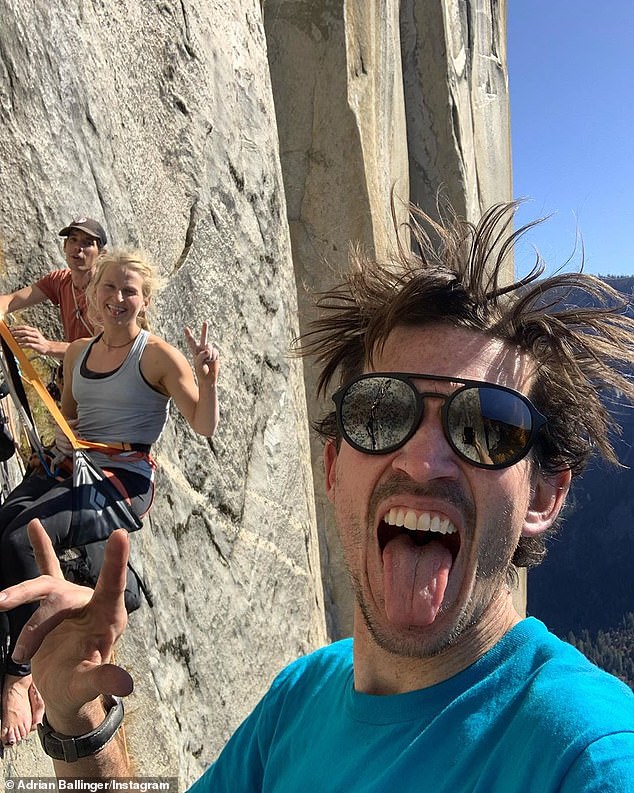 Her rope was controlled by Free Solo documentary star Alex Honnold (left) and her boyfriend Adrian Ballinger (right) had planned to climb to the top, rappel down and take over the last 1,200ft for Honnold 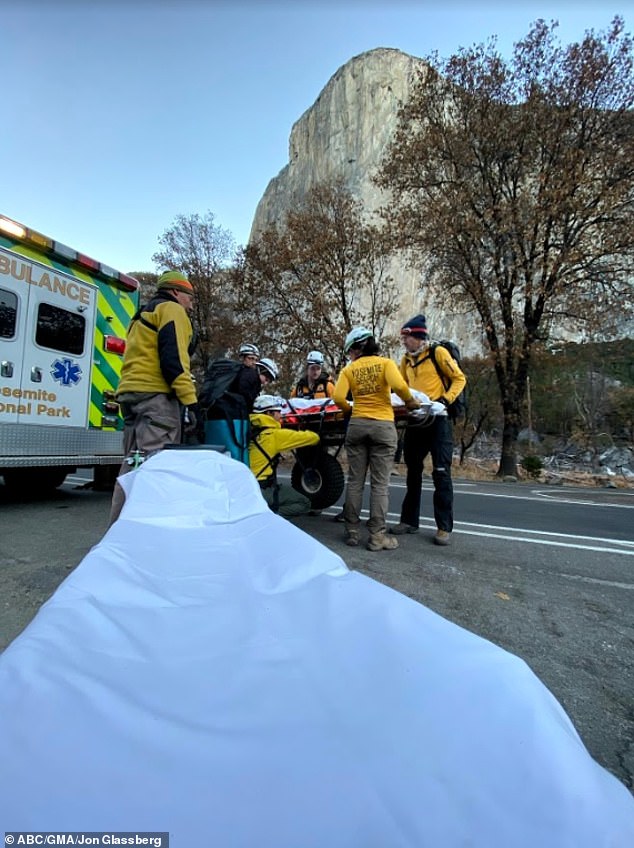 She was taken down following the dangerous tumble at the start of her ascent up the 3,000-foot mountain. Harrington is seen being loaded into an ambulance at dawn 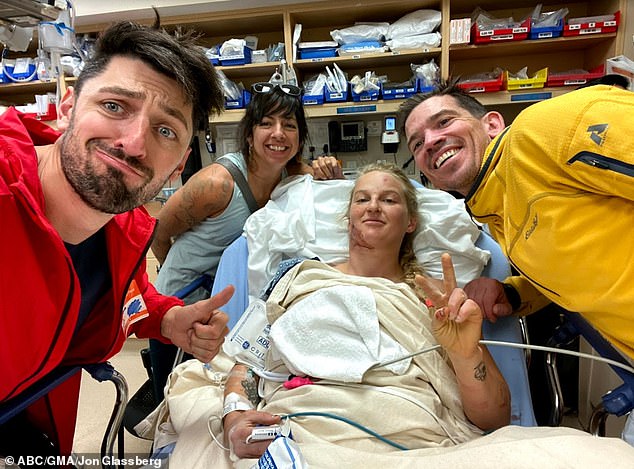 A rescue team and Harrington’s boyfriend, Adrian Ballinger (right), helped her get to a hospital 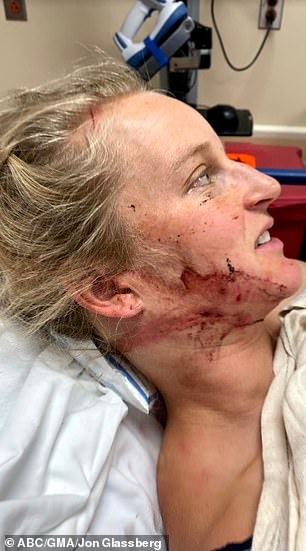 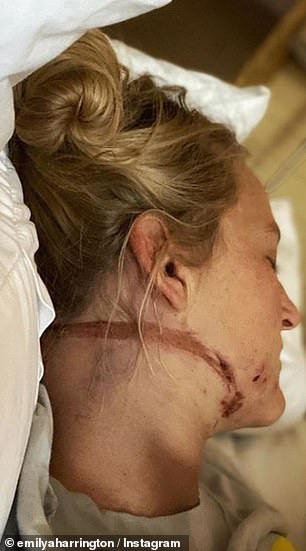 She said from a hospital bed in reply to someone saying it appeared as it her throat had been slit: ‘I look like a strangulation victim’ 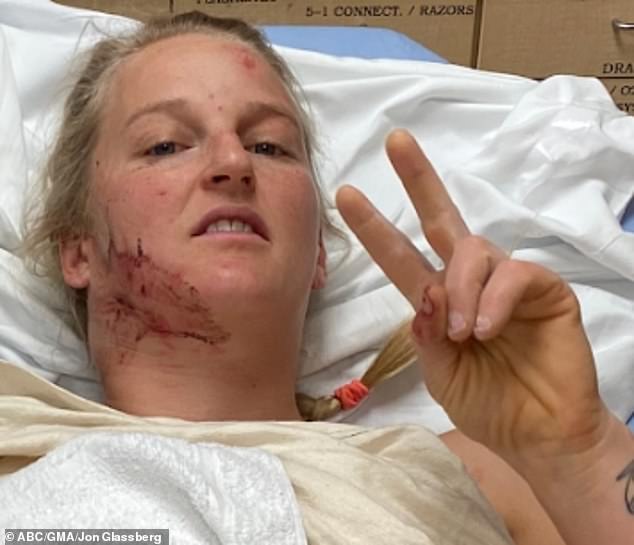 Harrington was fairly upbeat and Honnold shared that kept saying ‘If I was you, I’d be dead’ as he planned to ascend with no rope to save him

EvHarrington jokes as she soothed her neck with an ice pack: ‘My braid was digging into my head. I was so upset about it’

Harrington’s neck is seen covered in blood after the fall where Honnold snatched the rope to stop her.

But it could’ve been much worse. Honnold was belaying Harrington as she aimed to be come the fourth person and the first woman to climb El Capitan’s Golden Gate in just one day.

With her leading a simul-climb – sharing a rope to enable multiple climbers to scale a feat much faster than separately – it was his responsibility to catch her if she fell.

He indeed managed the slack well and it was possibility helped by the fact he hadn’t started climbing at that point.

‘I was sitting on the ground tying my shoes, getting ready to start simul-climbing,’ Honnold told Outside Online about the moment he noticed she had slipped. ‘Tons of slack just pools on the ground, which is consistent with huge falls.’

He caught her and lowered her to a ledge then soloed up to find her with her flashlight helmet knocked off by the impact and ‘an enormous goose egg on the front of her forehead’.

She was injured hitting the rope on the way down. 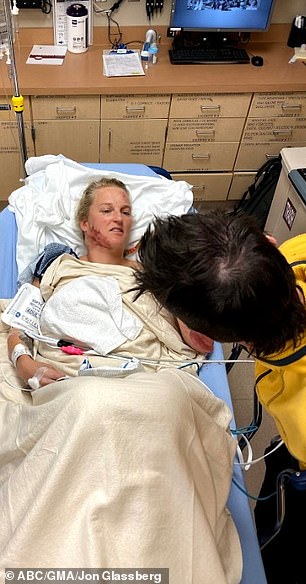 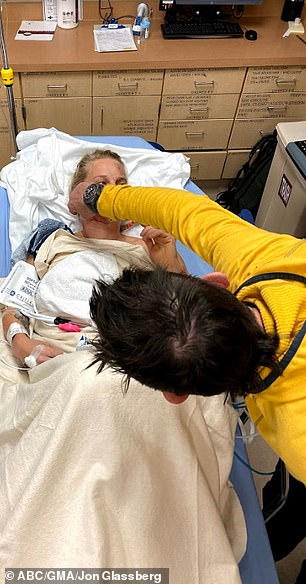 Her boyfriend (right) reasoned about her attempt to be the first woman to climb the Golden Gate: ‘She has to cut out part of the safety system on the easy sections. Otherwise she’d never have time to climb the hard pitches up high’ 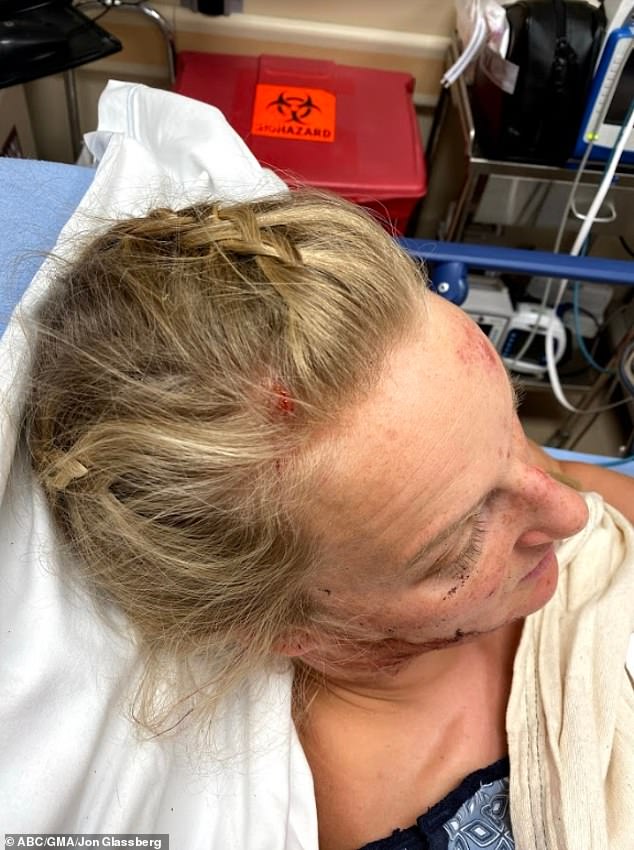 Her flashlight helmet knocked off by the impact and ‘an enormous goose egg on the front of her forehead’, Honnold recalled about seeing her after he free soloed up Golden Gate to help

The videographer then called the rescue team and Harrington’s boyfriend, Adrian Ballinger, who had planned to climb to the top of El Capitan, rappel down and take over the last 1,200ft for Honnold.

Referring to Honnold planning to climb the route with no rope, he shared that Harrington kept saying to him after the fall: ‘If I was you, I’d be dead.’

YSAR told she was lucky to be so close to the ground.

For that reason she may have been in a good mood because she was happy to be alive.

‘I remember thinking having pain is a good thing because it means that I can feel, it was a huge relief,’ she told Good Morning America.

‘It wasn’t a moment of panic or a moment surprise, it was a very calm moment in my head it was like, “OK I’m falling, this is happening”.’

It hasn’t deterred her from trying again to break the record.

‘The system worked. The rope caught me. My gear held,’ she told Outside Online. ‘I’ll try again in spring.’

Honnold agreed about the simul-climbing techniques they used.

‘She took one of the worst possible falls on the whole route and still wound up basically fine,’ he said.

Her boyfriend reasoned: ‘She has to cut out part of the safety system on the easy sections. Otherwise she’d never have time to climb the hard pitches up high.’ 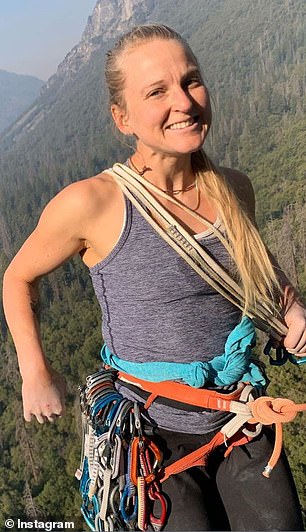 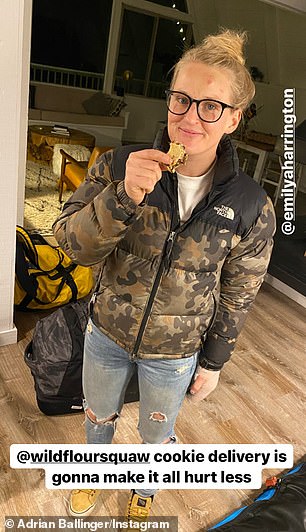 Harrington will try again to become the only woman to free climb Golden Gate in a day in spring. She told Outside Online: ‘The system worked. The rope caught me. My gear held’