EXCLUSIVE: Dramatic moment terrified crowd rushes into London shop to flee gunshots fired by ‘rival gangs’ that left innocent woman shot in the neck and fighting for her life

By James Fielding For Mailonline

This is the moment a crowd of people rushed into a shop in panic to flee a shooting between rival gangs which left an innocent woman fighting for her life.

A 32-year-old woman is in a critical condition in hospital after being shot just below her neck on Sunday evening.

She is understood to have been caught in the crossfire between two gangs.

The CCTV footage shows shop staff approach the entrance after hearing shots ring out nearby.

Seconds later a woman wearing a bobble hat comes running into the shop closely followed by a man in a blue coat.

Another woman and a man enter and the four of them wait by the counter, watching nervously to see what is happening outside.

Mustafa Altun, 36, who owns Sultan Food & Wine said the victim had been standing drinking with a friend outside the Cat & Mutton pub, which had been closed at the time of the shooting.

He said that a group of about four or five youths had started fighting on the opposite of the street by a fruit and veg stall outside the London Fields Express shop.

Mr Altun said: ‘There was a brief fight – maybe 30 or 40 seconds and then there was about three gunshots.

‘That’s when we went to go and see what’s going on and when people started running inside the shoo to safety.

‘The girl who was shot was dressed quite smartly and was standing outside the pub with a man of similar age.

‘She had fallen to the ground and was bleeding heavily under her neck. There was a lot of blood, I didn’t want to look. 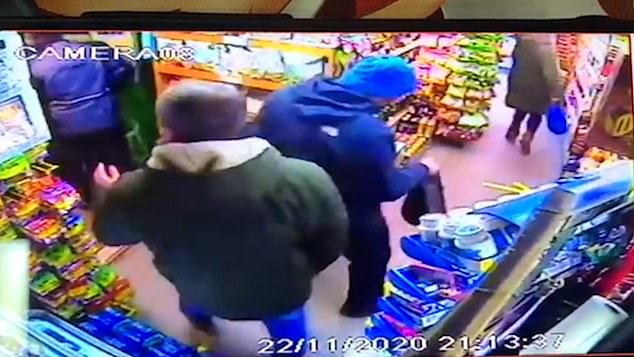 ‘The man who she had been standing with froze in terror, he was so shocked by what had happened he couldn’t even use his phone to call the police. We rang them.

‘The gunman was chasing someone. There were about four of five of youths running, I couldn’t make out who was chasing who as it was dark.

‘They came from behind the bus stop outside London Fields Express and after the shooting they ran back in the same direction.

‘I don’t know who the girl who was shot is, nor the man who she was with. There are a lot of people who come to the street on a Sunday because there’s a food market on earlier in the day.

‘There was a doctor who was passing and went to help the girl until the police and paramedics arrived minutes later.’