This is the moment tourists fought a pitched battle with bar bouncers at a Spanish resort popular with British visitors.

Violence erupted outside a disco pub, on the seafront, in the city of Palma de Majorca, capital of the Balearic island of Majorca.

An eyewitness with a smartphone filmed the fight between a group of German tourists and doormen on the beach promenade. 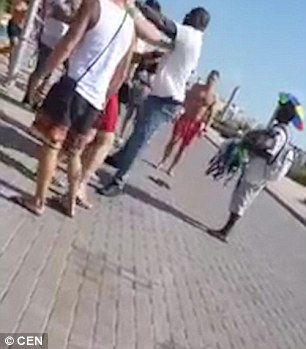 The tourists scuffle outside a disco pub on a promenade in the city of Palma de Majorca, capital of the Balearic island of Majorca

Eyewitnesses said the Germans first verbally abused the bouncers and then launched an attack, repeatedly punching them, in the street.

The doormen were all wearing white shirts with the word ‘Staff’ written on the back.

A blonde woman watching the fight screams in panic and other passersby watch the fracas as the battle continues for several minutes.

One burly bouncer is seen punching one of the tourists who runs away rather than face the man, as the woman carries on screaming.

Doormen from other nearby bars reportedly joined in to help the bouncers overcome the German tourists. 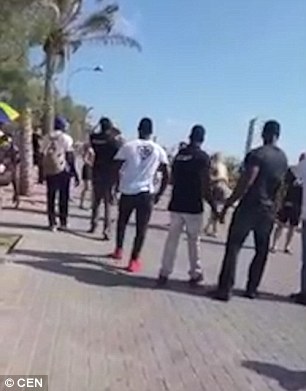 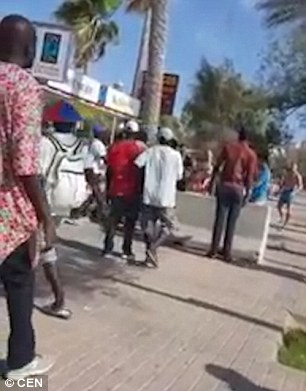 The fight took place in an area of Palma de Majorca popular with tourists and which normally has a party atmosphere.

Local media report that a few people suffered minor injuries but nobody was arrested.

There is no report on whether police are investigating.