Amazing images were produced from data recorded by the Japanese Himawari-8 satellite which surveys Earth’s western hemisphere once every 10 minutes.

University of Tasmania scientist Grant Williamson published a timelapse animation of hotspot and burnt area data captured by the Japan Aerospace Exploration Agency (JAXA) from late October to January 5, showing how the fires spread, eating into vast areas of bushland.

‘You can see the daily pulse as fires quieten down overnight, as well as days of major fire runs,’ Mr Williamson wrote on Twitter.

Mr Williamson said the satellite struggled to detect hotspots beneath thick smoke or cloud, which resulted in moments where all the hotspots disappear.

He also noted the background image of the animation is a historical map over which the hotspot data was overlaid – not an actual photo of the land at the time.

The second video covered data from September to January 4 and was posted to Twitter by Geoscience Australia scientist Robbi Bishop-Taylor.

Vivid pictures taken by the European Space Agency’s Copernicus Sentinel-2 satellites at the height of the bushfires on December 31 showed the immensity of the thick smoke blanketing Australia’s east coast, run through with flames and burn scars.

The European Space Agency took the vivid image above on December 31 at the height  of the fires. NASA then captured the thick billowing smoke as it blew across the Pacific (below) to grey the skies over Chile

NASA satellite images from 27 December through to January 8 then showed the smoke plume carried by the prevailing winds across the Pacific where they hit South America, turning the skies grey over central Chile, the UN World Meteorological Organization said.

The federal government has put $50 million towards helping restore Australia’s devastated wildlife as bushfires continue to ravage the country.

Treasurer Josh Frydenberg said the initial contribution would be evenly split with $25 million to an Emergency Recovery Fund and $25 million divvied up between frontline environmental groups. 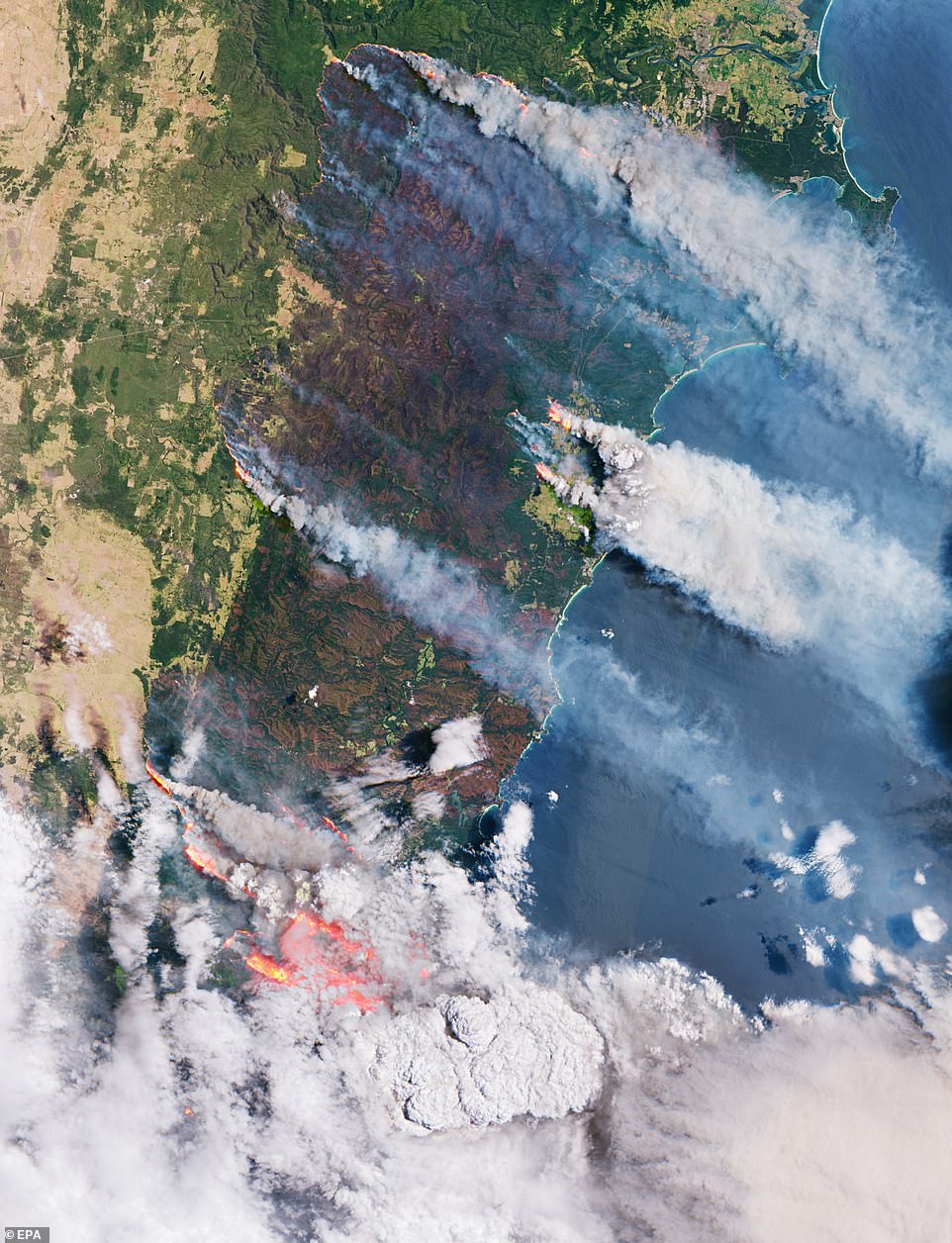 Money in the fund will be steered by Australia’s threatened species commissioner Sally Box, who will work with scientist to put a recovery plan in place to protect wildlife.

Mr Frydenberg has described the bushfires as an ecological disaster, telling Sky News on Monday eight million hectares had been lost so far while more than one billion animals are estimated to have died.

Meanwhile, thousands of kilograms of carrots and sweet potatoes are being dropped by planes in fire-affected areas of New South Wales to help wallabies.

Injured animals are also being treated in bushfire-ravaged areas of Victoria.

RSPCA Victoria has deployed a mobile animal care unit to Bairnsdale to care for injured wildlife, including animals evacuated from the stranded town of Mallacoota.

RSPCA South Australia has converted a wildlife refuge into a treatment centre for animals injured on Kangaroo Island.

Up to 80 animals are being rescued every day in Queensland, prompting the state government to announce $250,000 in grants for wildlife carers.

Australian National University Ecology Professor David Lindenmayer told Daily Mail Australia on Friday that the bush would appear to recover quickly as fire triggers the germination of seeds and new shoots from blackened eucalypt trunks – but it would be altered.

‘It’s misleading to suggest the system thrives (after fire),’ he said.

‘There are many species in the community that survive with different strategies for life, like in a city you have some doctors, lawyers, dentists – it’s the same with a community of plants.’

Mr Lindenmayer said the bush will recover but would be different, and some of the animals may not recover at all.