A dramatic new surveillance video shows a female cop being rescued by a fellow officer after she was shot ion the face.

Officer Kayla Maher and her partner were responding to calls about a suspicious vehicle at Marshall Road and Ridge Drive in Yonkers, New York, when an 18-year-old opened fire at the cops.

Maher was shot in the chin in the attack surveillance footage from the scene shows her partner braving gunfire to save her, picking her up and throwing her over his shoulder as they fled.

‘We have an officer shot in face,’ an officer told dispatch. ‘Can we please [expletive] get some units here.’

The dispatcher confirmed: ‘We have an officer shot in the face. Units expedite.’

Then cop responds: ‘Send a truck or something to come get this officer out of here. She’s shot in the face. We’re right behind the suspect, we’re pinned down, we can’t [expletive] move.’

Witness say they heard between 30 and 50 shots fired as the cops and gunman shot at each other.

Maher, who’s been with the Yonkers police force for two years, was rushed to hospital but released on Tuesday afternoon. 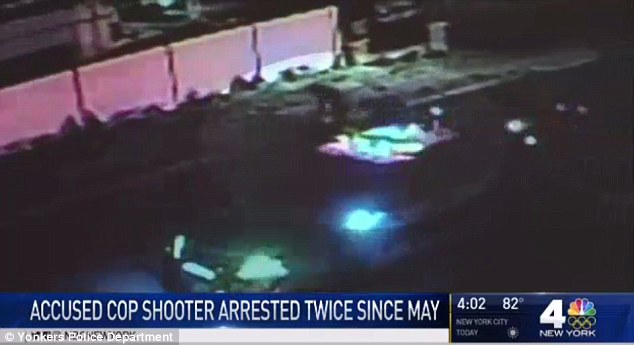 Cops she was doing well and was even able to hug officers who arrived to applaud her as she walked out.

‘It could have been much worse, thank God the officer didn’t sustain life-threatening injuries,’ said Yonkers Police Commissioner Charles Gardner. ‘She’s lucky to be alive.’

The gunman, an 18-year-old with previous arrests for weapons charges, was arrested.

He’d been arrested back in May, then aged 17, after his father had called 911 saying the boy had a gun.

Cops found him in a White Castle parking lot with a gun, 300 rounds of ammunition and knives in his possession, but was sentenced to just five years’ probation as he was a minor.