The latest flood emergency in Australia has been dramatically depicted in footage of a police rescue of two men and their dogs from a vehicle trapped in rising waters.

Queensland police released bodyworn vision on Friday showing officers rescuing the pet-owners, after their van was swept off the road by floodwaters at Morwincha, 90km south-west of Brisbane yesterday.

The frightening video was captured just after 4pm on Thursday after police had attended the scene of a fatal traffic crash on the Cunningham Highway.

But the officers from Ipswich District then received an urgent call for help, several hundred metres away, where they found the men’s van had been washed off the flooded bridge and was wedged against a tree.

One man could be seen clinging to the passenger door while another elderly man was trapped inside with three dogs as floodwater rose rapidly around them.

The men were spotted in the van after it had been washed off the road by rising floodwaters near Morwincha , south-west of Brisbane 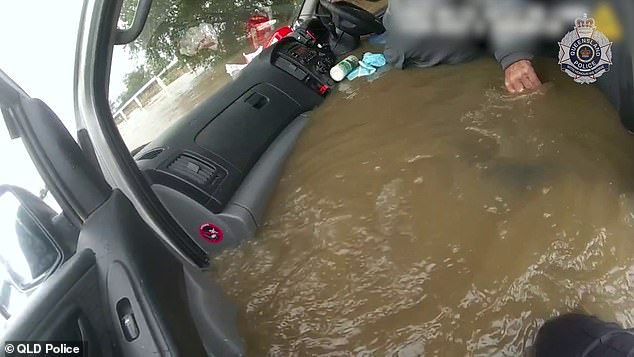 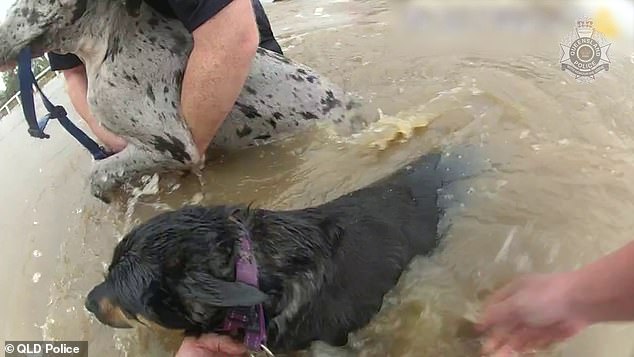 Police waded more than 100 metres out and retrieved the first man and a puppy.

The officer then returned to the vehicle and carried the elderly male on his back through the flood waters to higher ground.

The remaining officers coaxed the dogs, a kelpie and a Great Dane, out of the submerged van and carried them out.

One of the officers involved in the rescue is currently caring for the dogs, Ghost, Molly and the puppy (yet to be named), until conditions ease in the Scenic Rim area.

Police again urged the public to avoid roads, creeks and bridges likely to be impacted by rapidly rising water, storm debris and flood damage during the current wet weather. 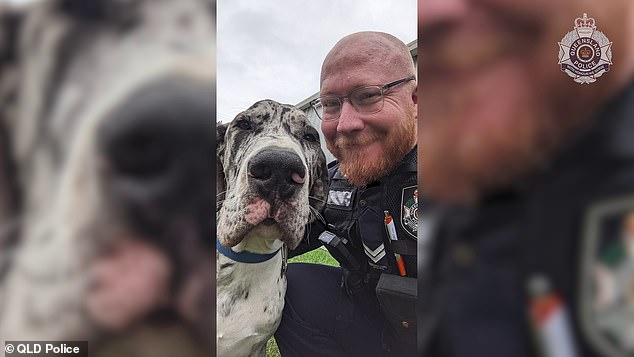 One of the officers poses with the Great Dane rescued from the van at Morwincha, Queensland 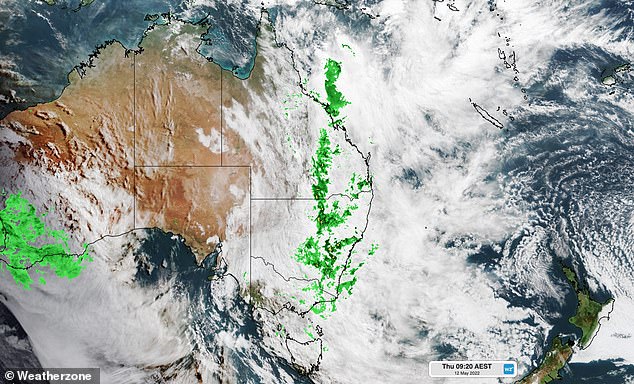 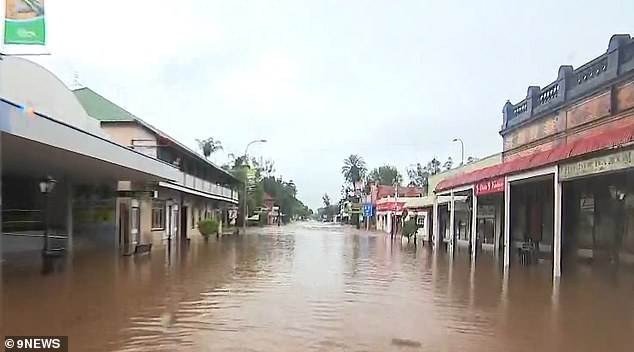 A flood emergency has been declared in the Lockyer Valley east of Brisbane and severe weather warnings remain in place for southern Capricornia, Wide Bay and Burnett, southeast coast and an area from south of Gladstone down to Maroochydore on the Sunshine Coast

The Bureau of Meteorology has predicted totals of up to 160mm over a six-hourly period in some areas, with the slow-moving low currently impacting Bundaberg and Gympie areas.

Major flood warnings also remain in place for the Cape, Condamine, Balonne, Logan and Macintyre rivers, and the Bureau says flash-flooding is possible in many areas.

The town of Laidley in the Lockyer Valley has been particularly impacted, with the main street of the historic town resembling a river on Friday morning. 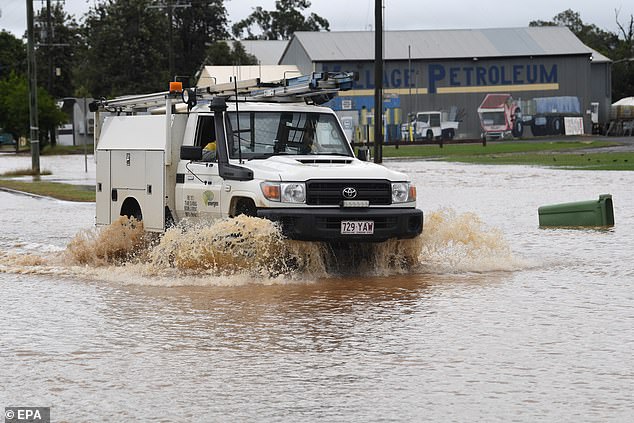 Police again urged the public to avoid roads, creeks and bridges likely to be impacted by rapidly rising water, storm debris and flood damage during the current wet weather

Here we go again: Entire Australian village goes underwater as the east coast is pummeled by a huge rain bomb – and there’s ANOTHER downpour due this weekend

A Queensland town is underwater with a massive swathe of the state is set to get smashed by yet another heavy rainfall event spurred by a massive low-pressure system.

The main street of Laidley – a historic valley town just off the highway between Brisbane and Toowoomba – was so consumed by floodwater on Friday morning it more resembled a river.

Residents of the Lockyer Valley area fled low-lying homes overnight after being woken up by a flood siren, door knocks, and instructions to evacuate, following days of heavy rain.

A huge low-pressure trough is due to dump intense rainfall of up to 132mm across Brisbane, Ipswich. Darling Downs, the Sunshine Coast and Bundaberg in just six hours.

The Lockyer Valley Regional Council has urged residents not to wait for emergency services to help them and to head for higher ground before it’s too late.

Many roads are already closed in the valley, 115 marked as unsafe to drive on,  and some bridges already flooded.

‘Act now – do not wait for emergency services to knock on your door,’ Lockyer Valley Regional Council said in an alert.

The Bureau of Meteorology has warned the mammoth predicted rainfall totals could mean life-threatening flash floods and potential landslides between Gladstone, Coolangatta and the Darling Downs.