Drew Barrymore admits her divorce from Will Kopelman left her in a ‘very dark and fearful place’.

The 43-year-old year-old actress split from the actor in 2016 and has revealed she only came out of her slump after being offered a role in the Netflix series Santa Clarita Diet.

Drew – who has daughters Olive, five, and Frankie, three, with her ex-husband – said: ‘I was not looking for a job.

‘I was in a dark and fearful place!’ Drew Barrymore says Santa Clarita Diet saved her after Will Kopelman split; she is seen in November

‘I had actually stopped acting for several years because I wanted to raise my kids. But then a shift happened in my life and I was separating from their father and it was just a very difficult time.

‘I definitely personally was in a very dark and fearful place and then this script came along and I was like, “Yeah I don’t think this is a good time” and ironically, I think it taught me a valuable life lesson.’

Drew admitted that her role on the series has helped to give her a new spark. 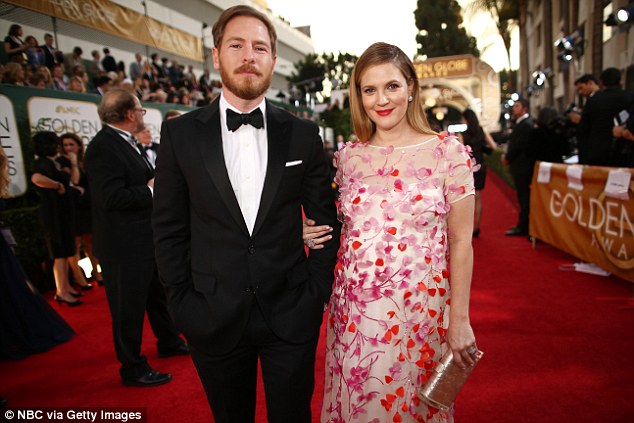 As they were: With her ex-husband Will Kopelman in 2014

The veteran Hollywood star – who has had two other marriages, to comedian Tom Green and producer Jeremy Thomas – told NBC: ‘Sometimes when you think something is the worst timing and the worst idea, it can actually become the thing that saves you and pulls you out and gives you a new focus, and empowerment, and switches your constant stuck way of thinking and feeling and puts it into something else that might actually get you to a healthier place faster.’

Earlier this week, meanwhile, Drew revealed that her daughters want to follow her into acting.